Opening the Universe at the Delta College Planetarium 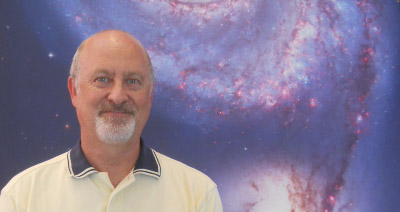 The Delta College Planetarium & Learning Center, located at 100 Center Avenue in Bay City is an off-campus center for Delta College classes combined with a world class digital planetarium that will be celebrating its 20th Anniversary in 2017.

Funded by an $8.75 million NASA Challenger Grant, the Planetarium houses a 50-foot diameter dome above 146 seats, each wired with a 5-button responder system for audience interaction with whatever program is being presented. Additionally, the planetarium theatre also houses the world’s most modern full-dome digital animation system called Digistar, which takes audiences on realistic voyages through the cosmos and can also offer an unforgettable musical entertainment experience.

Current Director Michael Murray came to the Delta Planetarium a little over a year ago and is only its second director since it first opened back in 1997.  As this remarkable resource approaches its 20th Anniversary in 2017, Murray finds much in the near future to be excited about. “Back when the planetarium was first conceived by Delta College President Don Carlyon and physics professor Marty Goodman, they each saw a unique opportunity for a world class planetarium not just for the college, but for outreach to the community for public education, shows, special events and rentals, as well as functioning as a learning center and classroom site for the college,” he explains.

“This is one of the three learning center classroom sites in the tri-city area where people can actually take classes, and as we move into the future it’s important to take a look at how to reinvent ourselves and look at the future of what this facility is capable of,” he continues. “When you mention the word ‘planetarium’ people think of a ‘star theatre’; and traditionally that’s true, but with the modernization of technology and full dome digital animation and 3D graphics, we can create & feature programs on just about any topic – sciences, history, art culture, and music.”

Murray says there is an important distinction between a planetarium and an observatory. “An observatory has an actual telescope and is used strictly for observation with the telescope; whereas a planetarium also has a theatre. We set up all kinds of telescopes outside for many special events and will be doing an international ‘Observe the Moon’ night in October.”

Murray explains how he got interested in astronomy at a very young age. “So many things came together at the right time when I was growing up,” he reflects. “The Apollo Moon program was going on and that was huge and I was completely sucked into it. I also spent a lot of time in the mountains of Colorado observing and seeing lots of astronomical events and went to my first planetarium when I was 8-years old. Initially I thought I would go into research astronomy; and I did for a bit; but I also loved education and public programming and teaching. My father was a disc jockey in the ‘60s and my mother an artist, so I wove those things together with my love of science into creating programs that were both fun and exciting.  Before coming here to the Delta Planetarium I worked at one in Sault Lake City for the last 13 years, focusing on show production.”

For their 20th Anniversary year which happens in February, the Delta College Planetarium has several special events in the works throughout the year, beginning with several groundbreaking new shows coming this fall that weave together a potent mix of storytelling and education.

“We’ll be opening with Gateway to the Stars on October 7th, which is a live and interactive show that demonstrates how to explore the current night sky using binoculars and telescopes. Murray will use the digital dome theater to teach you observing techniques that will maximize the stargazing experience. Weather permitting, telescope viewing will take place after the show on the planetarium's rooftop observation deck. This will run the first Friday of every month.

“The Dark Matter Mystery in September & October will explore the enigmatic idea of what ‘Dark Matter’ is actually comprised of and poses how it affects the way we see the universe,” explains Michael. “Dark Matter is still an unknown type of matter that affects the way galaxies and galaxy clusters move, so we can see how the galaxies rotate and look at what’s measureable.”

“There is no way galaxies can hold themselves together and it appears other matter is exerting some other force to actually hold them together,” he continues. “Dark Matter is like a Black Hole in a way because we can’t explain why it works the way it does. We know Dark Matter has gravity, but you can’t measure it and can only see how it affects the galaxies. Dark Matter is very prevalent throughout the universe and there is actually more of it than there is ‘normal’ matter. You can quantify how much Dark Matter there probably is because of how much influence it exerts on galaxies, so probably more than 25% of the composition is Dark Matter, but only about 4 percent is visible light and visible matter. And then there’s a whole other subject called ‘Dark Energy’, which is another force impacting the expansion of the universe.”

“Life Under the Arctic Sky will be opening in November,” notes Murray, “and this documentary features real dome photography that follows the northern peoples of Scandinavia who actually follow the reindeers across northern Norway, Sweden and Finland.  It covers that lifestyle and their connection to nature and the skies and the Northern Lights and is a beautiful film, which will tie in nicely to the holidays.”

In late October & November The Wayfinders will focus upon Polynesian navigators of the 1000s and how they got across the Pacific Ocean using only stars, currents and waves before modern navigational instruments were invented.  And in addition to their holiday music show the Planetarium will also feature some excellent special events.  “We’re experimenting with a wide variety of content for families, kids, and adults,” states Murray, “and will also be bringing Pink Floyd’s ‘The Wall’ in for a run on every Saturday in October.”

Murray says that public awareness of the Planetarium is growing and increasing and that he is happy more people are finding a good mix of programming; and that the planetarium is able to find more times to run public shows. “Usually we draw about 20,000 through here each year, including many different schools & colleges. 30-45% of the groups coming through here are K-12 because we feature a library of 35 different educational shows that school groups can pick from to provide demonstrations that tie in with classroom studies.”

The Delta Planetarium & Learning Center features one of the more advanced digital 360 dome systems, which offer an incredibly high level of detail, resolution and depth. Plus, they feature armrest interactives, which is rather cutting edge and rare for a community the size of Bay City to feature such a world-class facility.

The recording process itself is fascinating, with everything digitally captured. “With the full dome technology of hemispherical 360 programming, most presentations started with digital animation,” explains Mike. “Initially the camera didn’t have enough resolution and contrast to be able to render live video capture, but that’s not true anymore. In recent years we’ve been able to do more than 4K resolution for an entire dome frame that can be captured in real live video time, so some of the programs are actually filmed and used with multiple cameras and stitched together.”

“Now with digital sensor technology, things are getting good enough we can do a shot with a single fish-eye lens.  Most of the programs come on a hard drive and they have to be encoded to play as a video, so 30 or 60 individual frames per second are all encoded to play as one video stream through eight computers that are synchronized and threaded together so you can’t see the seams. This way it runs as one fish-eye image displayed on the dome running at 30-frames per second.  That’s a lot of data!”

“With digital animation we had to render each frame with all that content,” he continues. “When I was producing these programs it would take about 18 months and a dozen people working with a rendering farm of 400 computers to do one 30-minute program. Some of these productions can range anywhere from $100,000 to $2 million dollars to produce.”

Undoubtedly, these are exciting times we live in on the edge of the final frontiers of space.  “We’re discovering new planets orbiting around other stars that we call ‘exo-planets’ and there are now thousands of them that we know about,” states Mike. “Only 20 years ago this was still only a hypothesis, although the idea of planets orbiting other stars seemed very obvious; but now we are seeing them all over the place.”

“Also, the new probes that out there are fascinating. New Horizons flew by Pluto last year and there are indications that there really is a 9th planet out past the orbit of Pluto – not a dwarf planet, but a big major planet. The reason we haven’t seen it before is because it’s in an orbit so far outside beyond Pluto; but we’re starting to see its gravitational influence on a bunch of dwarf planets in the outer solar system.”

“This is all cutting edge science that is happening!”