NCC senior Kenny Kujawa drove in sophomore Harry Dwan for a 1-0 win in game one, while freshman Brady Alverson's 2 RBI single scored Justin Osmond and Tate Hausbeck for a 9-8 win in game two.... 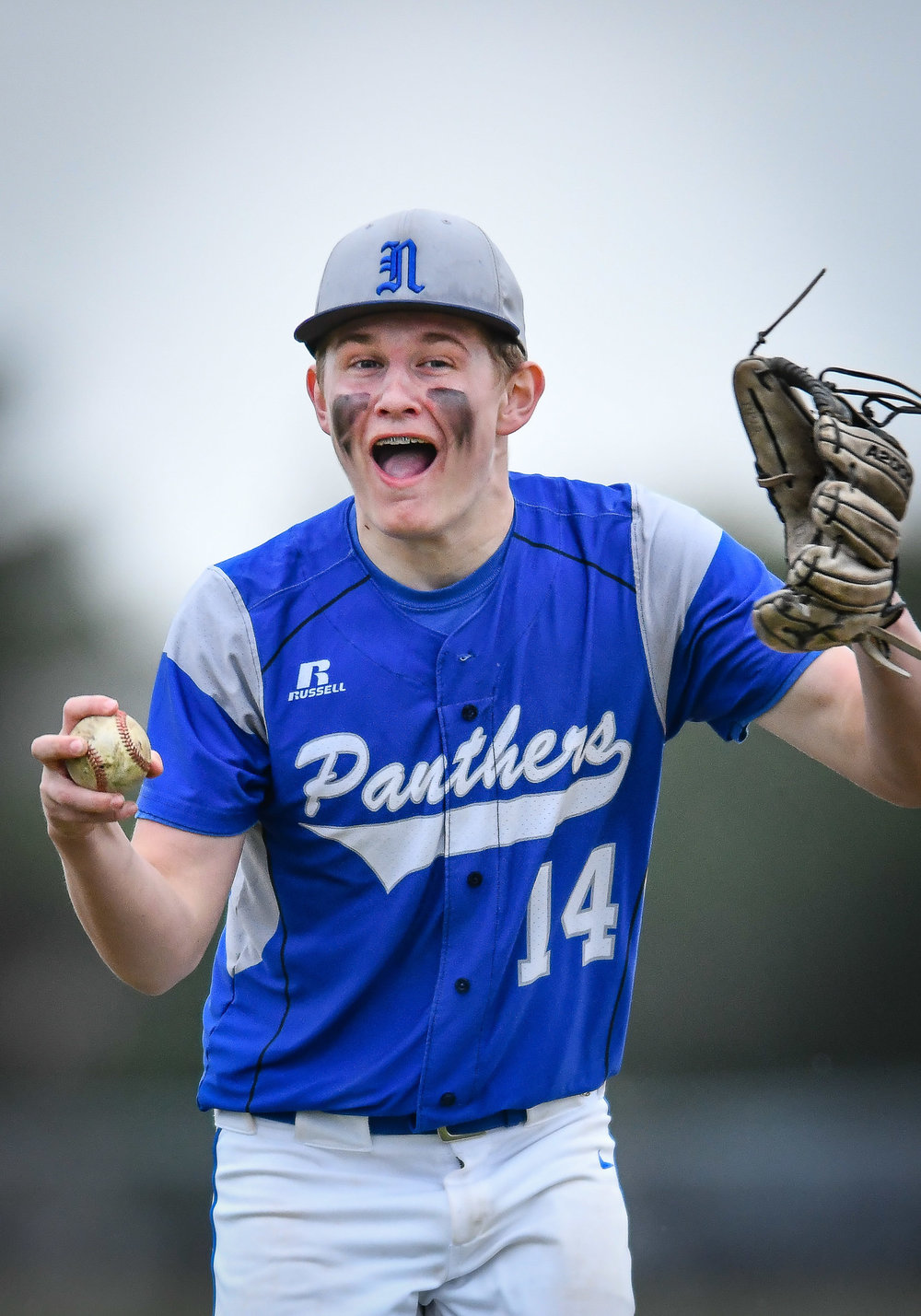 The Nouvel CC baseball team swept a pair of games in a double header against Marquette High School with two walk-off wins (1-0 in the first game) and (9-8 in the second game) at Nouvel Catholic Central High School tonight.
The Panthers rallied for a 1-0 walk-off victory in the bottom of the seventh to win the first game after playing six and a half innings of scoreless baseball.
Nouvel freshman starting pitcher Brady Alverson gave up a hit to Marquette third baseman Tyler Delmont in the first inning and another hit to catcher Jakob Peterson in the second inning, before shutting down the Redmen the rest of the way.
With the game tied at zero-runs apiece in the bottom of the seventh, NCC senior catcher Sean Nowosatka led off the inning with a walk and advanced to second on a base hit off the bat of sophomore left fielder Harry Dwan to put runners on first and second with nobody out.
NCC junior shortstop Jacob Burr followed by reaching on a fielders choice, as Marquette decided for the force on Nowosatka at third, moving Dwan to second, as junior right fielder Logan Marino's 1-out walk loaded the bases for senior center fielder Kenny Kujawa, who drove in Dwan for the game winning run on an infield grounder.
Alverson was lights out, earning the complete game shutout victory in the opener after allowing just the two early hits and 2-walks, while striking out 7-Marquette batters through 7-scoreless innings, while Marquette's Blake Henrikson, Brendan Kaski, Hogan Shaneberger, Delmont, and Erik Johnson combined to give up the 1-run on 3-hits and 4-walks, with 4-strikeouts through 7-innings for the Redmen.
Marquette would strike first in the second game when Shaneberger led off the third with a walk, then moved to third base on a single by left fielder John Thomson, before Delmont drove in Shaneberger with an RBI-single, as Kaski followed with an RBI-single to drive in Thomson for a 2-0 Redmen lead in the top of the third inning.
The Redmen padded its lead in the next inning when first baseman Hunter Doucette drove in Shaneberger and Peterson with a 2-RBI single for a 4-0 lead in the top of the fourth.
NCC answered in the bottom half of the inning when Kujawa reached on a walk and moved to second on a single off the bat of sophomore shortstop Justin Osmond, before senior Tate Hausbeck drove in the pair with a bases clearing 2-RBI double to cut the Marquette lead to 4-2 in the bottom of the fourth inning.
Nowosatka led off the fifth with a single, then was forced out at second when Dwan reached on a fielders choice, before Kujawa, Osmond, and Hausbeck (scoring Dwan) loaded the bases with consecutive walks, leading to a 2-RBI single by senior Nick Fleming, which scored Kujawa and Osmond, while both Hausbeck and Fleming eventually scored on an overthrow when the Marquette catcher tried to pick off Hausbeck at third for a 7-4 NCC lead in the bottom of the fifth inning.
The Redmen rallied late when Doucette singled; as Henrikson and Kaski were each hit by a pitch, followed by walks to Bryce Brazeau, Shaneberger, and Peterson, while Thomson reached on an error, which led to 4-unanswered runs to give Marquette an 8-7 lead in the top of the seventh inning.
Osmond led off the bottom half of the final inning with a walk, then moved to second on a single by Hausbeck, as Fleming loaded the bases with another walk to set the stage for the freshman Alverson, who ended the game with a 2-RBI single, scoring Osmond and Hausbeck for the 9-8 walk-off victory in the second game.
Hausbeck started the second game for the Panthers, pitching into the seventh, where he was replaced by Fleming, but remained on the hook for the three runners on base. Fleming would earn the win after giving up 2-runs on 3-walks with 1-strikeout through 2/3 of an inning, while Hausbeck gave up 4-earned runs on 7-hits and 4-walks, while striking out 6-batters through 6 1/3 innings.
Doucette, Brazeau, and Nemitz combined to give up 8-earned runs on 7-hits and 9-walks, with 2-strikeouts through 7-innings for the Redmen.
Nouvel is off until next week when the Saginaw High/SASA baseball team visits for a double header at the Nouvel CC baseball field on Tuesday, while Marquette will stick around town to compete in the Heritage H.S. baseball invitational tomorrow afternoon at the George Olson Recreation Complex in Saginaw Township.