Notes of Grandeur, Hearts of Sorrow: 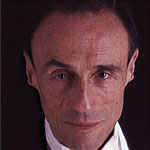 It was with immense sadness and undeniably shock that I heard the news about the sudden passing on September 10th of Patrick Flynn, Maestro and Conductor for The Saginaw Bay Symphony Orchestra, and a true patron of the Arts in every sense of the word.

Apart from his professional & personal gifts, which allowed him to elicit exciting performances in an enormous range of repertory, Patrick possessed a charisma, style, and exuberance that were infectious, especially towards the Saginaw Arts Community that needed these important qualities at a critical juncture of its evolution.

In addition to infusing fresh life into the SBO, Flynn served as Music Director of California's Riverside County Philharmonic and guest conducted annually for Symphony Silicon Valley, The Holland Sinfonia and the Finnish National Opera.  A statuesque and proud Englishman, Patrick's passion for his art was equally matched by his enthusiasm for truly understanding the nuances of the community where he performed.

I distinctly recall the first phone conversation that I had with Patrick. Eager to learn as much as he could about the musical heritage of mid-Michigan, we met at Fralia's on Hancock Street, and while he ate a lunch that he brightly announced "rivaled anything in California', we managed to spend a good two-hours discussing the many levels of local community talent that populated the Saginaw Valley.

And what struck me the most was his determination to cultivate it.

Later that Spring, I invited Patrick to attend our annual Review Music Awards Ceremony as a guest presenter - an invitation that he readily accepted.  That year Michael Brush and Julie Mulady were performing with Brush Street, featuring a guest performance by young saxophonist Morgan MacMillon, and after the set Patrick came racing backstage to express his total awe at the caliber of talent he had just witnessed.  "I must get them to perform with the Orchestra," Patrick commented.  And true to form, he did - transcending musical idioms by staging a landmark collaboration with these artists that kicked off the next Fall season.

Patrick inherently understood the success was only as high as the goals one set; and the magic came from the fact that musically, anything was possible. Last year he commented to me, "I'm not interested in cultivating an audience that only goes to the symphony. I'm interested in cultivating people that like music. These are people that like Radiohead as much as they enjoy Beethoven." And therein resides the legacy of Patrick Flynn - quality, whether it was a matter of style or substance - knew no boundaries.

He also once commented, "One thing I like about America is there are very few rules except be good at what you do."  This sentiment also struck a strong chord with me and revealed, I think, the innate nature of the man to 'mix it up'.  "Sometimes new music sounds completely out of date and music written 200 years ago sounds completely modern." Again, this is a sentiment that I think speaks volumes about the man, whom in many ways, was ageless.

I was slated to interview Patrick about the new symphony season two days after his passing. Now I am sitting here writing a remembrance. That all whom are involved with the Saginaw Bay Orchestra and appreciate what Patrick Flynn contributed not only to the SBO, but our community as a whole, have deigned to dedicate the current season in his honor is a fitting tribute to artist that never sided with the notion of 'limitations'.

Patrick's final gift to our community is the current season he assembled for the orchestra - Music Beyond Your Imagination, which kicks off on Saturday, October 11th with A Night at the Opera Part II. Suzanne Mallare Acton, Assistant Music Director of the Detroit Opera Theatre will serve as guest conductor, which is equally fitting insofar as Acton was Patrick's choice to conduct A Night at The Opera during the 2007 season. Joined by the Verdi Opera Theatre of Michigan, this performance will feature Stacey Tappan and showcase a smorgasbord of opera hits one would never expect to hear in one evening.

Patrick Flynn will be missed, but not forgotten.  And his legacy truly does live in those heightened mists beyond our imagination.