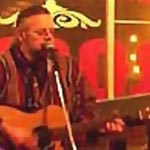 In 2006, Matchbox Mike was diagnosed with esophageal cancer. He underwent an operation for feeding tube placement followed by three months of chemotherapy to prepare him for a surgery that would remove his esophagus. This proved infeasible so plan "B" was implemented. It involved a vigorous round of radiation followed by aggressive chemotherapy. Mike is an army veteran and is being treated at the Ann Arbor Veteran's Hospital. This has been a blessing.

However Mike has been unable to work during this ordeal and living expenses are barely met. Consequently, Mike's family and friends are having a benefit at Spencer's Restaurant on Sunday, February 18th from 2pm-8pm to raise money as Mike continues his treatments. Tickets are $10 and include a tasty spaghetti dinner.

This writer had an opportunity to talk with Mike and learn more about his journey with cancer and his incredible humility and resilience as he resumes his struggle. This is a story that is both sad and uplifting. It's a fight to survive. And I came away from our conversation with an unbridled love and respect for a man I've known for several years without ever knowing him at all.

Matchbox Mike is a minstrel who performed a countless number of shows in many nameless and forgotten venues in Mid-Michigan for over 20 years. He was never showy or outrageous. In fact he was rather plain, humble, even predictable - man, that cat loves to play the day-glo sixties rock n' roll of Dylan and the Beatles and he sure can work that Ovation Celebrity and his 12-string Takamine.

Matchbox Mike was a traveling minstrel singing the hits of yesterday and singing them well. He carried no pretensions of stardom, he has a full time job; no he plays for the love of playing.

It's a calling that found him at the age of 30, standing at the crossroads and looking for direction, a journey to find his missing piece. The seeds for this longing took root upon see the Beatles on the Ed Sullivan Show. It was February of 1964 and on his August birthday his parents gifted him an electric guitar. It was a precious gift no doubt inspired by young Mike's constant appeals.

Mike never realized at the time that this sideline would help define him and give him a deeper understanding of who he is. Mike recalls performing gigs at Holly's Landing and performing with his pal Tim Hutton. Mike spent 10 years with Hutton in the juggernaut known as the Matchtones.

Those were days when music became the engine of his unrestrained joy. But it all culminated in his house gig at the uber-popular Sullivan's Black Forest Brew Haus.

Mike explains, "It's a great place and they are great people to work for. Tim Sullivan and Tom Wood are super people and have created a family atmosphere. Now that I'm middle-aged I appreciate things more. Music helps me - it's is an upper. I always want to get better. Everyday is a school day."

His wife of 10 years Cindy Arnold agrees, "Mike has always loved music, you know - Dylan and the Beatles. He'd play to lift others spirit. There was this Tuesday Night "Special" at Church for developmentally disabled adults. Mike would play guitar and sing Christian songs they loved his guitar."

Cindy recalls when they first met at Gridley's Music in the early seventies. Mike gave guitar lessons while Cindy taught keyboard. The legendary Jack Bruske hired them both and the equally legendary Eddie Kurth became a mentor and a friend.

Of all the tales told during the interview, it is the story of their courtship that best captures the spirit of Mike and Cindy. After pursuing adulthood and separate dreams, Cindy became reacquainted with Mike through her brother Dan (a cool specialty bartender/mixologist at Holly's Landing - dig them Car Crashes!).

"Ahh Cindy umm do you remember me?" "Yes"

"Do you wanna do something Friday night?"

Cindy thought Mike hung up, offended by her bold offer. But he called back later and explained that he was cutting a bagel and when she said "married", he bolted and accidentally cut himself. He proposed and they were married.

Mike is talking with me about his illness:

"It feels like you're knee-deep, walking through the muck. The air is thick and you're knocked down to half your size. This month is more of the same (chemotherapy). I don't think about it don't dwell on it. I do what I do."

Cindy pipes up and explains that Mike just laid down bass lines for some backing tracks when he performs next month at the Black Forest.

Mike and I talked a little more.

Afterward I felt that Mike and I were kindred souls and I appreciated his humble candor and felt the warmth of his overarching kindness. I wish for this minstrel a lucid dream of existence - of love and serenity healing.

Is it real or is it a fantasy?

Imagine floating through the canyons. High above the earth where the clouds are resting
A blue haze catches me and reassures me

It's OK to let go