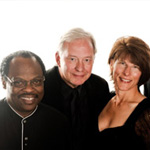 Bay City's historic State Theatre provides the perfect setting for showcasing the talents of keyboardist & songwriter Michael Brush as he takes to the stage on Saturday, February 25th at 7:30 PM to perform revamped versions of original songs spanning his 35-year career with his group Brush Street and an expanded String & Brass section.
With a core group consisting of Julie Mulady on vocals, Matt Corrigan on guitar, Jordan Edwards on drums and Ryan Fitzgerald on bass, Brush is adding violins, cellos, saxophones, trombones, and trumpets to his material, signifying a pivotal new direction for both Brush and the group.
All the material Brush will perform is newly arranged and enhanced or re-imagined with instrumentation; and the evening also coincides with the release of a new book of Brush's lyrics entitled 'Words', which is available now on Amazon.com.
Since his retirement at the Saginaw Arts & Science Academy a couple years ago Brush has been busier than ever with expansive musical projects and collaborations; and last October he was honored for a lifetime of musical achievement and cultural contributions to the Great Lakes Bay Area.
"Being that I'm retired now, I'm in a mode of going through things that I've created over the years and my goal is to place them into some kind of final and definitive form," explains Mike. "There are many songs I've written over the years that are half done and with the others, I wanted to realize the full potential of each song, which involves rethinking them."
"I've worked with orchestration in the past, but was seriously inspired by the late Leo Najar and the Bijou Orchestra," continues Mike. "I saw them last year doing Einstein's Dream and the 'Made In Michigan' performance and realized then that I wanted to do more orchestration with many of my songs.  I spoke with Leo about doing this with my material and he was into it, but unfortunately he passed away, so I had to tackle it on my own."
"I honestly can't say that I've ever done anything this ambitious and orchestration was never really taught to me, so some of the biggest help I received on this project was from Jeff Hall, who looked over my charts and made many valuable suggestions."
Mike says the easiest trap to run into is to over-arrange a song. "It's a trial-and-error process and you're writing your own song, so can do whatever you want with it; but my goal was to try and not make them all sound the same. The nature of each song should be the focus," he explains.
"If Julie is singing a song, or I'm singing one, you need to know which instruments work best.  There's one number where I only have one cello and myself; whereas others have full brass and strings."
"I definitely would like to take this to a larger level and possibly work with some of the symphony orchestras around the state and expand this approach," concludes Mike. "Basically this show will cover the expanse of my 35-year career, going back to such songs as 39 Foot Dome that I wrote when I was 27-years old on my first solo album, all the way up to some up-tempo material that I wrote this year on New Year's day."
"Right now I'm making sure all the keys are good for Julie and testing the arrangements, to make sure they lay right.  This has been an incredibly ambitious project. I can't imagine how many hours I have into this and I'm not sure whether I'm glad I didn't log my hours, because transposing was done note-by-note to create each orchestration."

Sponsored by Tri-Star Trust Bank & Team One Credit Union, tickets for 'Brush Street with Strings & Brass' are only $15.00 and can be purchased at the State Theatre by going to their website at www.statetheatrebaycity.com or phoning 989-892-2660.  The State Theatre is located at 913 Washington Ave. in downtown Bay City.