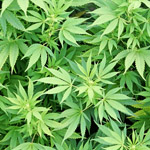 Who are these protesters that gather on occasion near the gazebo in Borchard Park across from the Saginaw County Courthouse, accusing Sheriff Bill Federspiel of wrongly raiding and harassing medical marijuana growers and caregivers?

Passing motorists blow their horns in support, while some shout perceptions such as “potheads” and “druggies” out of their open car windows, but the demonstrators say they believe medical marijuana to be a vital and valuable alternative medicine, and that the THC ingredient is a proven natural pain reliever that provides potential to cure or slow the spread of cancer.

Federspiel denies Roberts’ accusations of reprisals, saying there is no link between the July 6 DEA raid and the July 1 protest.

“We (sheriff’s deputies) were not even there on July 6,” Federspiel says. “I don’t understand why (Roberts) had a beef against me. The DEA has his property. It’s a federal case.”

Federspiel says he wishes to make clear that the DEA has taken the lead, and that these are federal cases. DEA officials have stated that federal law supersedes the state’s medical marijuana law, which voters passed by a landslide in 2008.

He notes that he supported the ballot proposal, and that he is not pursuing local prosecution. He adds that the Mustang he drives with labels of “Taken from a Local Drug Dealer” does not refer to local medical marijuana growers, because the car was seized from a defendant who did not have medical marijuana authorization.

The main intent of this news article, however, is not to regurgitate the back-and-forth in the daily local media that has taken place on account of Roberts’ protests directed toward Federspiel.

The goal is to describe why individuals become medical marijuana caregivers and to outline some of their experiences and views.

Profile of a Medical Marijuana Caregiver

Roberts is a 49-year-old graduate of the Saginaw Township’s former MacArthur High School. He says he first researched medial marijuana when he was diagnosed with hepatitis C, a liver ailment, back in 2003.

He lost his employment as a truck driver and qualified for Social Security disability payments.

Roberts says he unfairly is perceived as “a drug dealer” who caters to alleged patients who make false claims of illness and disability in order to “have a good time on us” smoking marijuana.

He notes that patients are required to have a doctor’s prescription. In conversation, he constantly refers to “Simpson oil” rather than smoking cannabis.

Rick Simpson is a Canadian who says applications of cannabis oil cured his skin cancer.

“Rick Simpson is a hero,” says a website for Rick Simpson Hemp Oil. “He has stood up for this medicine, the cure for cancer, in the face of strong adversity and personal liability. For about three years, Rick gave away hemp oil FOR FREE to anybody who needed it. He was arrested twice for doing this, under the charge of ‘trafficking THC.’ which is what the Canadian government calls freely giving away hemp oil. After his first arrest, Rick continued his activities, flat out telling the judge he would not stop.”

Roberts says he has followed the same example.

“There is a difference between cannabis oil and Simpson oil,” he explains. “The difference is that Rick Simpson gave the medicine away freely to people who could not afford to pay. That is what I do. If I’m going to be portrayed as a drug dealer, ask yourself, what drug dealer gives his product away for free?”

Some Advocates are Afraid to Protest

Roberts says he won’t reveal names of patients he serves as caregiver, or doctors who recommend medical marijuana, because they are afraid of consequences if they receive publicity.

He says a patient with terminal breast cancer died in mid-July.

She was a middle-aged woman who was bedridden for her final four weeks, he says, with the exception for one final time when she consumed Simpson oil and felt a surge of relief.

Roberts says a 6-year-old girl with an inoperable brain tumor has received a pair of doctors’ approvals to ingest small quantities of Simpson oil, which she consumers with spoonfuls of peanut butter. He says her constant headaches are relieved, so that she is able to sleep soundly rather than remain awake up to 20 hours per day in pain.

“People react as through we are teaching a small girl how to smoke out of a bong,” Roberts says.

“When the oil is ingested properly, it is a benefit. You can’t overdose on it. Child development is not harmed. The girl’s parents required two doctors’ recommendations to receive her medical marijuana card from the Michigan Department of Community Health. We have a tragic situation in which law enforcement is usurping the medical community. Medicine for this girl has been confiscated from me and she has relapsed into seizures.”

Online reports provide stories of children receiving medical marijuana. Marie Myund-Ok Lee, for example, is a Brown University professor who says that under a doctor’s recommendation she gives marijuana-laced cookies to her 9-year-old son with autism to treat pain.

Debbie Jeffries of Rocklin, Calif., received a pediatrician’s recommendation to give marijuana to an 8-year-old son who has attention deficit hyperactive disorder, ADHD. Mieko Hester-Perez of Fountain Valley, Calif., gives marijuana to a 10-year-old son with autism who had stopped eating.

Roberts says the Tri-City Compassion Group, which he helped to create, “is an organization of medical marijuana caregivers” which strives only to eradicate pain and suffering, not in any way to promote recreational marijuana use of to challenge law enforcement.

He says authorities are denying the will of voters who passed a moderate statewide medical marijuana authorization in 2008.

“We’re up against law enforcement, and we have judges who don’t believe in medical marijuana, so they won’t recognize the law,” he says.