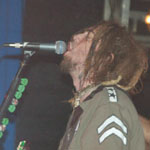 On one fateful day in 1996 Max Cavalera quit Sepultura, the band he formed with his brother Igor, for personal reasons.  Out of the ashes of this bitter break-up came Soulfly.  Acting on a whim while in France to perform a song on TV with the Deftones, Max announced his new band.

Named after lyrics from the Deftones' song Head Up that he helped pen, Cavalera gave birth to one of the most unique and heavy bands in the world. All a person needs to do is pick up a copy of 1998s self-titled Soulfly album to know that Max Cavalera's passion is music.  A perfect blend of heavy roots and world music, Soulfly brings a different sound to the world of metal.

Now with the release of their fifth studio album Dark Ages, Cavalera and company prove that what started out with numerous naysayers has grown into a world-wide tribe of fans.

For those new to the world of Soulfly the band consists of singer/guitarist Max Cavalera, Guitarist Marc Rizzo (former Ill Nino), Bassist Bobby Burns (former Primer 55) and Drummer Joe Nunez.  While this is the 4th line-up of Soulfly it seems to be a solid one.

Review Magazine got to talk to Max Cavalera on the eve of Soulflys' upcoming Dark Ages tour.  The tour, which kicked off September 18th in San Diego, recently stopped at Flint's Machine Shop on September 26th. Review talked to Max about his longevity in the music industry, drum jams and what it is that inspires their world flavored music.

Review:  You've been in the music business for a long time, what do you attribute your longevity to as far as staying relevant 20 years into your career?

Max: I'm not mentally stable and I refuse to grow up. That's me, That's Max.  I love it.  I wanna do this forever.

Review: You're known for re-invention and for different sounds.  What is your inspiration?

Max:  It's a combination of what I love. The roots- Metal, Hard Core, Punk.  And what I love from Brazil.  I love that Soulfly is Brazilian because of me but I share it with Marc, Bobby and Joe.  The influence is there if we want to use it but we don't rely on that only.  The essence of it is heavy music.

Review:  Dark Ages is a heavier album. What can we expect from the tour and it's successor?

Max:  Soulfly live has become killer!  You've come to expect it.  We just came from a 3-month European tour and it was one of our favorites.  It was all there, Marc's flamenco guitar, reggae beats etc.

Review:  How about the new album?

Max:  I'm just starting to create it.  I'm listening to a lot of Massacre, Death and Napalm Death right now.  I wanna bring that spirit back.  It's gonna be more crazy than Dark Ages.  It's gonna make Dark Ages look like a Britney Spears album.

The return of brother Igor recently sparked numerous reports that there may someday be a Sepultura reunion.  While this is pure speculation I think both band's fans would love to see this happen.

Fridays at the Falls presents: A Pair of Aces

The Rockshow Band on the Princess Wenonah