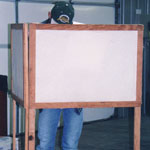 Students are told that the most true democracy - every citizen voting on every government decision - obviously would create even a far slower crawl than already exists. Therefore we elect and re-elect representatives, or in some cases we recall or oust them.

But some of those same educators now are trying a detour of that same representative democracy.

The state ballot's Proposal 5 on November 7th is the so-called 'K-16 Initiative'. This measure would guarantee annual rate-of-inflation hikes for more than 500 school districts, 28 community colleges and 15 universities. The 16th grade, of course, is the senior year of college.

The independent Citizens Research Council of Michigan estimates that to meet the first year requirement, legislators would have to take anywhere from $565 million to $707 million from competing budget areas. These major line items range from urban 'revenue sharing' to prisons to programs for the needy. The sum would come on top of $1.9 billion already lost through eliminating the Single Business Tax.

As a result, most lawmakers from both political parties are opposed to a Prop 5 provision that would sharply reduce their discretion to make budget decisions. In fact, this is a rare area in which even Jennifer Granholm and Dick DeVos see eye-to-eye.

Education supporters, for their part, assert that they wouldn't need Prop 5 if funding had kept a better pace through the years. They also note that investments in young people help save future costs in areas such as incarceration and public assistance.

The Citizens Research Council reports that K-12 funding increases have surpassed the rate of inflation since 1994's voter approval of Proposal A, which shifted the burden to the state sales tax (6 percent instead of 4 percent) while sharply slashing property taxes. However, funding for colleges has increased slower than inflation during the past dozen years and has led to big tuition increases, especially at the university level.

*
Another prominent Nov. 7th question is Proposal 2, known as a pitch to abolish affirmative action at the state and local levels. The Citizens Research Council says the specific aim isn't to remove all of affirmative action's aspects, but to target those that involve alleged "preferential treatment". For example, a public college or a government employer still could emphasize intensive recruiting of minorities and women, but no longer could show a 'preference' in striving to build percentages.

This is known as The Michigan Civil Rights Initiative. Affirmative action supporters believe they are in a quandary because they must explain why they want voters to say 'no' on Prop 2 in order to say 'yes' for keeping affirmative action. They fear voter confusion.

Federal & state affirmative action efforts started after a landmark civil rights law took effect in 1964. One of the first focuses was to integrate law enforcement during a time of urban unrest, so that citizens of color would not perceive they were subjects in a virtually all-white police state.

Court challenges took root and the U.S. Supreme Court gradually has placed some reins on affirmative action, most notably in 1978 when Allan Bakke alleged reverse discrimination for admission to the University of California system.

Prop 2 proponent Jennifer Gratz is Michigan's Bakke. She was denied University of Michigan admission in 1995, perceived affirmative action as the reason, and went to court. U-M as a result entered the spotlight in 2003, through a sort of Supreme Court split decision that left both sides displeased, especially Gratz and those opposed to affirmative action. U-M was allowed to continue considering minority status as "a single positive factor among many' but no longer could award a specific sum of points.

African American multi-millionaire Ward Connerly shepherded passage of the California Civil Rights Initiative in 1996 and is working with Gratz to attempt the same in Michigan. Voters in Washington state have passed a similar provision, and Governor Jeb Bush in Florida enacted "One Florida" by executive order.

In all states that have repealed or restricted affirmative action, multiple lawsuits have resulted over an issue for which emotional voters don't even agree on the definition. Here's the U.S. Civil Rights Commission's version: 'Affirmative action is any measure, beyond simple termination of a discriminatory practice, adopted to correct or compensate for past or present discrimination or to prevent discrimination from recurring in the future."

The process is different than the far more controversial Proposal 5, because these funds consist of user fees rather than general tax revenues.

*
Proposal 3 is a classic confrontation between hunters and animal rights activists. A 'yes' vote would retain 2004 legislation to permit the hunting of mourning doves. A 'no' vote would cancel the law's effect and maintain Michigan as one of nine states that bans dove hunting.

In a footnote, hunters themselves are divided: Advocates say that aiming shotguns at these birds known as symbols of peace provides training for young hunters. Critics among the ranks say shooting at doves (many who don't flee because they have gained the trust of backyard bird-feeders) amounts to nothing more than skeet shooting, and is not a true sport.

*
Proposal 4, initiated by the Legislature, would strengthen property owners' rights against state and local declarations of eminent domain when pursuing land for roads and economic development.

Legislators say a string of federal courts rulings has created a need for the provision, and that many other states are doing the same. The state's best-known example was eminent domain for the General Motors Poletown Plant during the 1970s, which led to removal of 4,200 homes, 600 small businesses and 16 churches.

The Citizens Research Council's website can also provide you with additional in-depth reports on the five ballot proposals and can be found at election.crcmich.org

Halloween Bash at Midland Center for the Arts