Loose Caboose Returns for an Encore 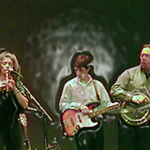 Back in the fluid & freewheeling days of the early 1980s, when the local music scene had a broad divergence of venues to match the equally varied talent on the circuit, Loose Caboose was easily one of the most successful & shining groups in circulation.  Comprised for four outstanding musicians, this immensely talented band could be seen regularly at venues like Wendler Arena, Paddy's Pub, Tiffany Biergarten, Bay Lanes, and The Crump Pump.

Conceived back in the early to mid-70s at a time when Rock 'n Rollers such as The Grateful Dead and The Byrds were moving in softer directions bathed in the melodic textures of Country music, Loose Caboose focused on the rarely heard renderings of Bluegrass Music, combining it with contemporary flourishes, expertly rendered harmonies, and concoctions of good-natured anecdotal humor that were unlike anything ever seen or heard. Their high-energy arrangements gave them an edge, which in combination with their superb vocals and contagious enthusiasm won them immense affection from their followers.

Consisting of Tim Grefe on 5-string banjo, Chris Barton on guitar, hammered dulcimer & recorders, John Hagaman on guitar, and Dave Eggebrecht on fiddle, the group disbanded in 1982 as their lives diverged along with the scene, until September 24, 2005, when the Saginaw Choral Society reunited the foursome for an immensely successful Reunion Concert at The Temple Theatre.

Indeed, because the demand & accolades were so strong, The Choral Society is now bringing Loose Caboose back for another go-around at Encore, Loose Caboose! - slated at Saginaw's Temple Theatre on April 21st at 7:30 PM.
Unlike many that disband only to return to the stage in successive 'reunion tours' every decade or so, this will most likely be the final gig for the foursome, and the definite end of an era.

"This isn't going to be like those acts that retire 17 times in a row," laughs ringleader Tim Grefe. "After this concert, we're done. We had a wonderful time at the last show, and it's so hard to get everybody together; but the volume of e-mails and phone calls received was quite remarkable. A lot of people said they wanted to come last time but weren't able to, another batch said they wanted to bring their friends to see us, and another segment of the audience consisted of people that had never seen us until then.  Besides, we had so much fun that we want a second helping ourselves."

According to Tim, the performance this time will vary considerably for the last time around. "There are certain signature songs that we are expected to do," he explains, "but we started digging through our old catalog of material, and discovered a lot of great songs that we'd forgotten about. I'd say that well over half of the show will consist of new material. It will be 'different' old stuff," he laughs.

For the unitiated, Loose Caboose was the final version of three acoustic bands that played in Mid-Michigan through the mid-70's and early 80's, including Sunset Express and The Beantown Valley Ramblers.  At their apex, they performed with the Saginaw Bay Orchestra in Wendler arena to a crowd of 5,000 people.

When asked about their appeal, Tim is reflective. "I think it represents a school of music that isn't that followed anymore. We've got the Doo Dads around here, and they've got a good bluegrass sound, but we were more traditional and bit more irreverent. It wasn't just the music people came to hear, but also the banter. You don't see a lot of entertainers work the tables, talk, and joke with people anymore, even though I see the scene making a comeback locally with a lot of great young talent."

Tickets for Encore - Loose Caboose! are currently on sale and includes a post-concert afterglow, where you can visit with the band, and a special silent auction called the 'Upscale Garage Sale Auction', which organizers say fits the flavor of the event' you don't know what you'll see!"

Proceeds from the concert & auction will benefit youth and outreach programs of Saginaw Choral Society.  Tickets are $25.00 and available by calling 989-753-1812, or at The Temple Theatre box office.