good pitching and timely hitting led to a 'hot' start on a frigid day at Dow Diamond... 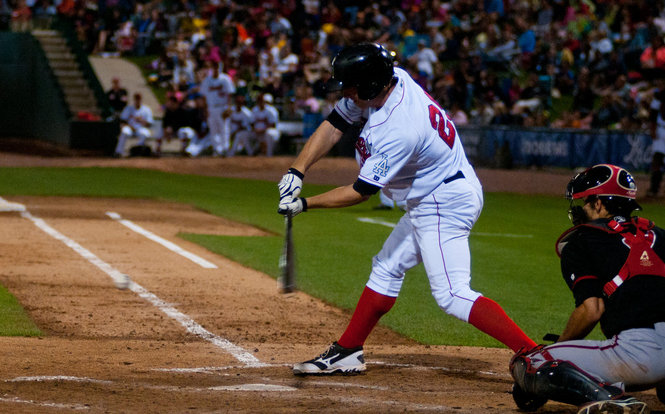 The Great Lakes Loons kicked off the 2016 Midwest League season with a 5-4 victory over the Lansing Lugnuts (Toronto Blue Jays) in front of 2,664 fans at a very frigid Dow Diamond this afternoon.
“Good opening day,” first year Loons manager Gil Valazquez said. “I felt our pitchers did a great job, our hitters had some great at bats and we pulled the win out.”
Eighteen year old infield prospect Omar Esteves, who recently received a $6 million dollar signing bonus from the Dodgers, showed what he could do with the bat early with a nice flare single to right center field to set off a 3 run first inning for the Loons.
First baseman Matt Jones would drive in Esteves with an RBI double, and the Loons rounded out the first inning scoring with four base on balls for an early three run cushion.
Outfielder Ariel Sandoval drove in third baseman Brendon Davis with an RBI single in the bottom of the fifth to put the Loons up by a run, and Esteves added the eventual go-ahead RBI single in the seventh to round out the Loons scoring.
Great Lakes starter Michael Boyle (0-0, 5.79 ERA) looked good, striking out 7 Lugnuts batters despite a three run fifth inning where Lansing crept back into the game. Boyle would go on to give up just 4 hits and two walks through 4.2 innings of work, but missed out on getting credit for the win.
“He had that one inning where he lost the lead and didn't get the decision but I felt he did a really good job,” Velazquez said about Boyle. They (Lugnuts' hitters) hooked the ball down the line and that was pretty much what happened, but other than that I thought he did a really good job. Our relievers did good too. (Nathan) Long came in, (Alex) Hermeling, and (Marcus) Crescentini; all three of them came out and did a really good job. That's what gave us the win.”
6-foot-10 reliever Nathan Long (1-0, 0.00 ERA) earned the win for the Loons; allowing just one hit, 1 walked batter, and zero runs through 1.1 innings of relief as he battled the freezing cold temperatures at Dow Diamond.
“Obviously it's freezing cold but it's something you have to adapt to, especially playing in Michigan,” Long said. “I felt good, I got to come into the clubhouse in between innings and warm up a little bit and get my legs going on the bike. I went out there, felt good, made my own pitches, and the rest just took care of itself.”
The first two road games earlier in the week (scheduled in Lansing) were postponed due to the winter conditions, so the Loons skipper was happy to finally start off the season with a win in front of the home crowd. It had him feeling good about starting his tenure in Midland, but he was quick to give all the credit to his players.
“It feels great,” Valazquez said. “First win, it's always nice to win. I can't take the credit for the win though. They got the win, they went out there and played in that cold, swung the bats, made the plays and made the pitches, so I gotta give the credit to them, they got the win because they played a great game.”
The Loons continue their 5 game home-stand tomorrow when they will host the Lugnuts for a 2:05 game, then the Fort Wayne Tincaps will be at Dow Diamond Mon, Tue, and Wed for three games.
Miscellaneous   Rock   Rap/Hip Hop   Country   Jazz   Blues