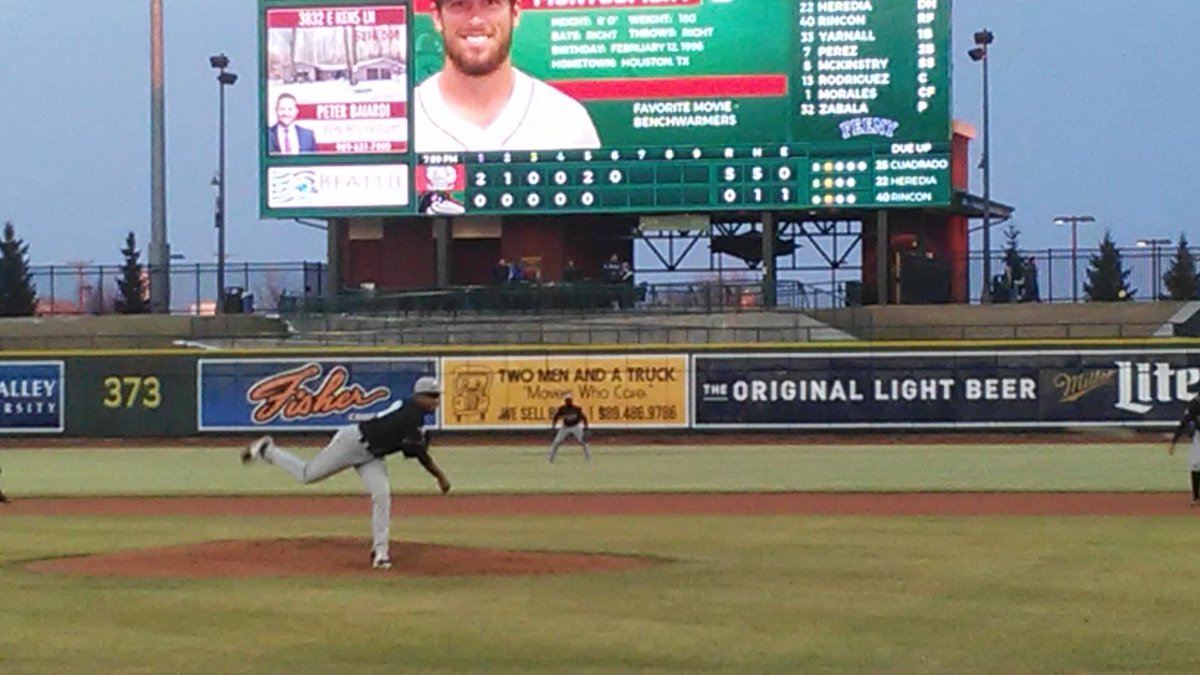 Midland, MI:
The Great Lakes Loons ran into a red hot starting pitcher and some hot bat's, dropping its Midwest League home opener 12-1 to the Lansing Lugnuts (Toronto Blue Jays) at Dow Diamond tonight.
Lansing starter Yennsy (pronounced Genz-See) Diaz was virtually untouchable, giving up just 1-hit, while striking out an incredible 10-Great Lakes batters through 5-2/3 scoreless innings to earn the victory for the Lugnuts.
Loons starter Max Gamboa got off to a rough start, giving up 2-runs on a hit and a walk, while racking up his pitch count to 21-pitches in the top half of the first inning, as the Lugnuts took an early 2-0 lead after just a half of an inning.
Diaz answered in the bottom half of the first, striking out the top three Loons' batters, all looking, to help preserve the Lug's 2-0 lead after 1-inning.
Lugnuts' CF Reggie Pruitt reached on a 1-out single, then advanced to third on a single by RF Chavez Young to put runners at the corners with 1-out in the top of the second, before a passed ball allowed Pruitt to score for a 3-0 Lansing lead after 2-innings.
Gamboa settled in to retire the final six batters he faced, before being replaced by Loons reliever Andre Scrubb, who started the top of the fifth inning. Gamboa was tagged with the loss after giving up just 1-earned run on 3-hits and 1-walk, while striking out 4-Lansing batters through 4-innings tonight.
Scrubb started out on a positve note, striking out the first batter, then forcing the next batter to pop out, however, he would give up a single, then walk the following two batters to load the bases, before giving up a 2-run single to Lansing third baseman Kevin Smith, as the Lugnuts extended its lead to 5-0 in the top half of the fifth.
Loons reliever Aneurys Zabala came in to get the final out of the fifth, replacing Scrubb, who left after giving up 2-runs on 2-hits and 2-walks, with 1-strikeout through 2/3 of an inning.
Great Lakes catcher Ramon Rodriguez managed to get to Diaz with a lead off double in the top of the sixth, but Diaz would settle in and work out of the jam unscathed, as Lugnuts reliever Andy Ravel came in to get the final out of the inning.
Zabala was very 'perfectly' impressive in relief for the Loons, hitting 99-MPH on the gun while striking out 6 of the 7 batters he faced (with one lineout) through 2-1/3 no-hit, no walk, and scoreless innings tonight.
After getting the first two batters to fly out in the top of the eighth inning, Loons reliever Devin Hemmerich gave up three straight singles, allowing 1-run to score as Lansing increased its lead to 6-0 through 8-1/2 innings.
Loons' second baseman Zach McKinstry led off the eighth with a walk, moved to second on a wild pitch, then advanced to third on an infield ground-out, before Great Lakes CF Brayan Morales drove him in with an RBI single to put the Loons on the board 6-1 in the bottom of the eighth.
Hemmerich gave up a lead-off single to Lansing SS Kevin Vicuna, then Loons RF Carlos Rincon lost a high fly ball up in the lights, allowing Lug's first baseman Kacy Clemens to reach on a double, before Hemmerich walked LF Ryan Noda to load the bases with no outs in the top of the ninth.
Smith followed by hitting a hard grounder to Loons SS Moises Perez, who bobbled the ball then forced a throw in the dirt at home, which allowed the run to score for a 7-1 Lugnuts lead with the bases still loaded and nobody out.
Hemmerich dug deep to retire the next two batters, but gave up a 2-run RBI single to Pruitt for a 9-1 Lug's lead, before he was replaced by Loons reliever James Carter, who went on to give up an RBI double to Young, walked Lansing lead-off hitter Samad Taylor, then gave up a 2-RBI single to Vicuna (batting for the second time in the inning) for a 12-1 Lansing lead in the top half of the ninth.
Morales was 1 for 2 with 1-RBI to lead the Loons' lack-luster offense tonight, while Rodriguez was 1 for 3 with the only other Loons hit tonight.
The Loons and Lugnuts are scheduled to play game two of this four-game home-and-home (2-and-2) series right back here at Dow Diamond at 6 pm tomorrow night, weather permitting.
Lansing starter Yennsy Diaz exits the game after a 10 K performance against the Loons on opening day: