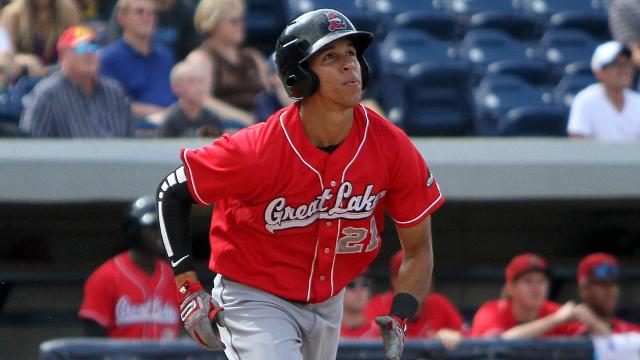 The Great Lakes Loons put on an impressive offensive display beating the Lansing Lugnuts 10-2 in front of 5,769 fans at Dow Diamond Saturday night.
A pair of Los Angeles Dodger second round draft picks led the Loons scoring attack in the first game -of a three game- home series against the Lugnuts, who are the single A affiliate of the Toronto Blue Jays..
The Dodgers' second-round selection in the 2014 MLB draft, Alex Verdugo went 3-for-4 with 3-RBI including a two-run home run in the bottom of the first inning to pace the Loons.
Alex Santana, who was also drafted by the Dodgers in the second-round of the 2011 MLB draft, went 2-for-4 with 2-RBI. Santana followed Verdugo, adding a solo home run to round out a four run first inning for the Loons. Kyle Garlick was also 2-for-4 with 3-RBI and a home run as well.
The Loons put another two runs on the board in the second inning and piled on four runs in the eighth inning to round out the scoring.
Newly acquired pitcher Tommy Bergjans (1-0, 4.50 ERA) got the start and pitched four solid innings in his debut at Dow Diamond. Bergjans gave up two runs off five-hits, walked one, and struck out five batters in his four innings of work.
Loons reliever Cameron Palmer (1-1, 3.97 ERA) allowed just two-hits, walked three, and struck out five batters, through 2.1 scoreless innings. Jose Alberto Molina gave up four hits and struck out three batters through 2.2 scoreless innings for the Loons.
The Loons will host the Lugnuts Sunday and Monday for the final two games of the series before heading out to South Bend on Tuesday, Wednesday, and Thursday for a three game road trip. The Loons will return to Dow Diamond again Friday for six games in seven days against Lake County and South Bend to round out July.
Miscellaneous   Rock   Rap/Hip Hop   Country   Jazz   Blues