Laurence Juber Live @ White\'s There Once was a Note 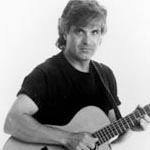 I'm like other clueless subdude rock fans - I know the headlines but I never read the back page. Most of us who love the Beatles and solo Beatles' offshoots know the songs but never get too deeply into the catalog or remember the minor players or even some of the major players who's Harry Nilsson and how does he know May Pang and who is May Pang anyway?

Laurence Juber falls in at least one of these categories, maybe both. He's a bit obscure, to be sure. But he was a major player in Wings from 1978 until their breakup in '81 over some bitter Japanese Tears.

Juber won a Grammy for Rockestra from Back To The Egg and he performed on two Wings mega-hits Coming Up and Goodnight Tonight.

But his story is just beginning.

Since his departure from Wings, Juber has been in hot demand working on soundtracks for television and the silver screen. Juber did the guitar for my favorite do- the-dirty-dog film, Dirty Dancing, as well as incidental music and soundscapes for Happy Days, The Young and The Restless and Family Ties.

He and his wife Hope wrote the score for Gilligan Island: The Musical - just to flesh out the elusive plotline once and for all and set the record straight - Gilligan was never really a sailor; he was a song and dance man. Seems Juber's father-in-law is Sherwood Schwartz - yep, THAT Sherwood Schwartz.

A man so gifted that even his most insipid television crap became cult classics.
But underneath the seeming lowbrow comedy was a message much deeper that many fans realized. Mose Allison wrote a song about satire entitled Kidding in the Square. Schwartz was a master of it. According to Laurence his father-in-law will be celebrating his 91st birthday in November. Happy Birthday Sherwood!

Before the show, Laurence and I had a brief chat about all kinds of things - Paul and Heather, digital versus analogue, Joe Boyd's White Bicycles and Denny Laine's artistry. I asked the cliché question, one he's been asked thousands of times what's Paul really like - is he a dickhead or something?

Laurence said Paul is wonderful, just a regular bloke - and he seemed straight up about it. It was reassuring an icon intact.

Juber plays guitar like a sunny day - bright tonal landscapes and beautiful melodies - each note is aural perfection. The musicians in the crowd gasped in astonishment how could he play like THAT - impossible.

Indeed, Juber is a unique man possessed with an otherworldly musicality. He has a warm ready smile that is both inviting and protective. If you look past the blinding sunshine of his smile and peer into the depth of his aqua-green magnesium eyes you may get a hint of how he actually feels. Is that scruffy Beatles nerd getting a little too familiar for comfort? Is that same old question just a little more annoying than usual?

Ahh the price of fame. Pop stardom has a cost, no one gets away scot-free. And the lessons are learned and earned and multiple truths reveal themselves. One can maintain his artistic vision and still play pop music. In fact it was through Laurence's renditions of the music of the Beatles and Wings that the melodic genius of Lennon and McCartney was once again revealed and that old half joking phrase about classical icons - Beethoven, Bach and Beatles seems justified.

Laurence enjoys international acclaim as a master of finger style guitar playing - a well deserved reputation despite skirting on the fringes of popular music c'mon, for chrissakes, it certainly cuts against the grain to make hay with an acoustic guitar when the most popular forms of music are downloaded, plugged in, and IPod-ed.

Everybody has one and you never have to worry about music - and the sound is so tightly compressed by an over-stuffed digitalized format that the music is robbed of its life and vibrancy. Take me back to the warmth and sunshine of analogue!!!

In a phone call in the late eighties, Greg Shaw, founder of Bomp Records, told me that live original music no longer enjoys mass popularity of the sixties and has more of a cultish appeal but predicted that it will survive in small pockets across the country. It's within this context that White's Bar exists - one of those small pockets. And Laurence Juber's wondrous performance is part of that story!

Juber plays his guitar more as an embrace than as a phallic extension of rock-god manliness. This ain't Van Halen. And though he plays with a breathless physicality, the femininity of his style is expressed in the way he fashions those full melodic curves and bends and in the cool signature of his vibrato.

Local icon Andy Reed noted that Juber played the guitar like a piano - these weren't just normal chords. For instance, Juber might play a C chord across five frets and three different notes. On Maybe I'm Amazed he played the lead vocal and the solo at the SAME TIME! How did he do that? The renowned local Jedi warrior Dan Ardouin raved that Juber is a guitarist who speaks a whole different language when most guitarists are just trying to learn a few words.

Juber is so cool that he even tackled old chestnuts written by the pop-meister himself, Harold Arlen. If I Only Had a Brain immediately evokes images of Judy Garland's Dorothy and her ragamuffin band of rapscallions, though Juber's jazzy upbeat interpretation has a bit more irony.
The Beatles' songs were a revelation. On Strawberry Fields, Juber played the mellotron and the vocal parts as well as the melody and bass line with only his thumb and middle fingers, no smoke or mirrors or pedal effects. This is not humanly possible!!!

With I Saw Her Standing There Juber kept an insistent bass line out front while he played jazz-based arpeggios or glorious full-bodied single notes with the rest of his twinkies. It was a pure raver with the crowd singing along at a fever pitch.

He even tipped his hat to the masters recreating Little Wing and Layla in such a way that would no doubt make them smile. Perhaps my favorite song was Juber's self-penned tribute to his wife; In You're Arms, a song that is lovingly sentimental yet rich in the simple complexity of deeply-felt emotions.

Everyone present from inquiring musicians to adoring fans paid homage to Juber's unassuming genius and expressed open-mouthed awe of his incredible musicality.

How is it that Juber found the perfect note? I want one.