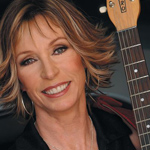 Juice Newton penetrated the dharma and found that still point between inertia and action when she formed what proved to be a long-term collaboration with guitarist/songwriter Otha Young. Together they penned Sweet Sweet Smile intended for their band Silver Spur but picked up by the Carpenters who rode it to the top of the charts. It put Juice Newton on the map.

By 1978 she went solo and never looked back. Her first solo release Well Kept Secret was a rock & roll album of the first degree that put Newton’s versatility on display and hit you like a punch. Though it didn’t chart, it created a buzz that persisted even as she shifted her focus to country music. In retrospect it was a clever strategy as evidenced by the success of her one off single Let’s Keep it That Way. It was a great song and climbed up to the Top Ten in the Country Charts.

The release of the LP Juice in 1981 proved to be a sentinel event for Newton as it spawned three consecutive Top Ten Pop Hits: Queen of Hearts; Angel of The Morning; The Sweetest Thing (I’ve Ever Known). The LP sold more than a million copies in the U.S. and went triple Platinum in Canada. In 1982, Newton received Grammy nominations for Best Female Vocalist in both the Pop and Country Categories.

And the hits kept on a coming.

The exquisitely arranged Loves Been a Little Bit Hard on Me reached #1 on Billboards Adult Contemporary Charts. Newton’s vocal was playful and note-perfect. Her stoned immaculate remake of Break It to Me Gently won her a Grammy for Best Female Country Performance. She continued to chart Top Ten Country hits throughout the eighties with songs such as You Make Me Want to Make You Mine, Hurt, Tell Me True, and What Can I Do with My Heart. In October 2010 she released Duets: Friends and Memories with guest appearances by such luminaries as Willie Nelson, Melissa Manchester and Frankie Valli.

It’s been quite a ride. I first saw Juice Newton perform in the eighties. She was long and lean with hair down to her waist and enough energy to fill up a stadium. She had spunk and a bit of the devil in her eyes but she sang like an angel. She didn’t take crap from non-believers, rack jobbers or the press. She was nobody’s fool. Juice Newton is an original that walks her own musical path whether it’s rock & roll, country, or pop. She’s a rebel with a cause who is stubborn enough to keep on singing with just enough spark and strut to heat up a stage with some of the best music in the business. Juice Music.

Juice, I first saw you in Saginaw opening for Mickey Gilley in the 80’s. You stole the show. What was that tour like for you?

We worked with Mickey a few times but luckily I was able to play with a whole litany of artists over the years. Each time you go out you feel happy to be on the stage and everything seems to come together and come alive. So every tour is always fun. I always look forward to working.

So you enjoyed working with Gilley? He was a country artist and I thought of you as kind of a rocker at the time? You had all those hits that spanned genres.

If the music is compatible it works out fine. I personally play a variety of music  - a bit on the pop side or pop rock then we were fortunate enough to cross over from that side to country…so if its good music - you have a good audience.

You had a lot of spunk at that show and you sang your heart out. I loved your response to a TV interviewer who asked you to describe your music, you simply said, “Juice Music” – can you describe “Juice Music”

I think I can – I try to pick songs that I really like that speak to me, if I didn’t write them, I choose them because they speak to me as an interpreter. And I think that’s the key – if you pick those types of songs or write those types of songs it just translates into your energy level and your commitment and if you really love performing then it works its way to the surface. So I think Juice Music would be the same in a sense as Springsteen Music or Beyoncé or Justin Timberlake Music. They like the music they create and it all translates into your own particular musical identity

What is your favorite type of music?

There isn’t just one genre. If the song touches you then it’s your music so I don’t think you should be afraid of any genre you can do well and related to. For me I was fortunate - still am – to be drawn to crossover material that appeals to me and seems to appeal to other people.  I don’t focus on just one type of music

The first time I saw you I felt you had some rebel blood – like a countrified Kid Rock – Did you see yourself as outside the mainstream?

Well, yeah. I’ve kind of have always been …over there. I’m doing necessarily do music that a label or Program Director wants – you can’t second-guess it. You need to be true to your self. I’m just trying to do music that I can live with for a long time

I thought you were a great rock & roller. You leaned in that direction a few times. Why did you let it go?

Radio changed and the songs I was writing changed a little bit but it didn’t change my insides. I think that if anything I’m back in that direction again now because I truly like to do the music I like if it’s a little rock or pop that’s what you do. You write it and you like it and you own it, so to speak, then that’s your music.

Juice, you have some great pipes. How do you rate yourself as Singer?

I don’t necessarily see myself as a great singer. But what I do see myself as someone that commits - every time I step onstage I commit and I think that translates to the audience. Like Kid Rock – he may not have a great voice but he commits and though he doesn’t sing as well as Justin Timberlake, for instance - it doesn’t matter because he has soul.

What was your lucky break?

I believe that hooking up with Richard Landis who produced those first big hits on the Juice LP (Queen of Hearts, Angel in the Morning) was my lucky break. I actually think that the timing was just so lucky as we were both available at the same time – doesn’t always happen. We sort of interviewed each other and did a few demos to see if we really liked the way we worked together in the studio. I consider that excellent timing.

What happened when you first went out on your own? Were you accepted right away?

People liked the music and liked my voice but we didn’t have a breakout tune at that point. It didn’t matter we just kept going. We had a great support system – a great producer, personal management – sometimes it was just our families. Your support system can sustain you emotionally and morally and keeps that energy moving forward

You’ve had a long prosperous career. What are your most precious memories, proudest achievements?

Well, I’m really proud of the fact my peers have noticed me – that’s more on the inside. I’ve had Grammy nominations and I’ve won a Grammy; In the Bay Area - an Emmy award. I feel really blessed by having all those accolades and recognition – that’s not what really keeps me going – but it is a way to measure how all that hard work has paid off. One time I brought my dad to the Grammys - it was a thrill of a lifetime!

You did a great version of Hank Devitos’ Queen of Hearts right around the time Dave Edmunds released his LP version. Did you hear it?  Were you inspired by Edmunds?

Edmunds is a very cool guy. I didn’t hear his version of it until much later. I started doing the song live and I did it live for about a year before I recorded kit. Then I brought it to Richard Landis when we started the Juice album. He wasn’t convinced at that point that it was a breakout song but I told him I think it this is a real cool song… so we cut it.

Do you have favorite road story…that you can talk about?

Hmm…no. Weird stuff happens. It’s not for everyone. You travel across country and you go to the wrong hotel. You have no place to sleep and nothing to eat. You would get lost or go to the wrong venue. It’s grueling and it’s tiring. Years ago one of the roadies told me, “The music just gets in the way of setting up and breaking down.”

How did you hook up with the County Sheriffs?

Well, it is a great organization. They help bring music to the area and they have a dedicated volunteer staff.  The people have a good reason to go out. The audiences are very welcoming and it’s a cool thing to do. I’ve also done shows for the military folks.

I’m very much looking forward to be back in Saginaw. I hope the weather cooperates, it’s so unpredictable. I guarantee we’re gonna have a good time and can’t wait to see all the people in the audience.

Juice Newton will be performing in Concert at the historic Temple Theatre on Monday September 26th @ 7pm. Tickets are $22.00. For information please call (989) 607-9125. This concert is presented by The Saginaw County Sheriff Support Division.