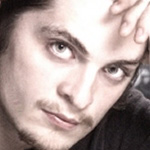 As a folk artist John Vasquez is a helluva rocker. On this disc, Vasquez and the Bearinger Boys fashion a vintage Kinks sound based on ancient blues and R&B and English folk music to create a series of tone poems that rely more on mood than wordplay and metaphor.

In fact, the music is cradled in modal shifts that eerily match Vasquez' voice - as if his voice is another instrument. Indeed, at times Vasquez seems to bass-in with his voice like old AP Carter (of the even more ancient Carter Family) to create a tonal counterpoint; at other times his voice sings in unison with the music creating a layered sound like two guitars playing the same riff an octave apart.

The lyrical approach is almost minimalist yet the spaces in-between theme and imagery seem to give the words more color and meaning.

This 9 track self-produced disc is a post modern Revolution #9– a personal statement from the street that exacts a heavy toll on the listener. You need to pay attention to get the message. At first listen you may conclude that Vasquez lays it out in blunt-no-holds-barred lyricism - seems that he's not one to mince words. Yet the themes hold both sides of his perspective – the lure of the streets, the cruel follies of the power-elite, and the love and redemption of new born baby.

There is hope, afterall.

The disc opens with Greed, a folk protest number with hints of Arlo Guthrie. Here Vasquez decries the avarice of the modern day scrooge. The American Dream becomes a nightmare with bailouts of the rich and recession for the rest of us - socializing risk and privatizing profits. It's an old story with the same old crimes. Nate Kaiser's searing and straightforward guitar work ignites the passion in the lyrics.

We Both Go Down Together is a one verse tone poem. The song's lyrical economy is very compelling and speaks volumes in juxtaposition of Vasquez primal and sloppy guitar workout. He sounds like a young Dave Davies carving out his amp to get a distorted sloppy sound. Davies' called it the "Fart Box" and the incendiary result was largely responsible for the success of You Really Got Me and All Day and All Of the Night. Vasquez may have discovered another way to scaffold his passion.

Talking & Walking is imbued with an electric/acoustic blend that finds Vasquez strumming with fury and speed like Ronnie Wood on Every Picture Tells A Story. He's not a traditional singer, no – he doesn't possess pipes like that. Instead he intones like Steve Earle. It's an intimate yet strong voice that invites you to come in a little bit closer. In this song Vasquez is confessing his passion for existential truth – where's the soul?  What is right and what is wrong? Or are these just convenient terms, shortcuts that obscure what is really going on?

Ghetto Fabulous is minimalist to the core - a lyric consisting of two words that repeats the title. It starts out slow, with John's quiet scat vocal embellished by the acoustic - a disembodied voice intones, "Its 2008 baby". Background noise suggests a gathering of people – a party? Vasquez takes on both acoustic and electric dual leads like a one man Allman Brothers. He's pickin' notes @ 150 mph in the absolute rush of being ghetto fabulous. Is it real or a ruse? Who cares…it's fabulous - with just enough ambivalence in the music to make you wonder.

On Every Note is another musical smorgasbord that mixes honky tonk riffs and rock & roll to great effect. The combination of electric slide over that swamp beat evokes a cacophony that matches the paranoia in the lyric…."Don't worry about them, they're up to no good." Vasquez watches his own back - "I don't miss a step 'cos I'll go broke. Yet… his paranoia is real, born of experience and the code of the streets and a hard earned truth – "Just do it for yourself." Amen, brother John.

The Other Side is a morose tale that carries a heavy load of doubt, guilt and anger but then balances these dark thoughts with sentiments that are life affirming. Ultimately it is a story of faith and resilience. It opens with a galloping guitar riff, the drums join-in and pound out an incessant beat that drives the uptight message. John sings, "My days have been dark and full of shit." But counters that on the chorus, "But I'll try real hard." He vacillates between hope and despair…"I don't know if I'll make it out the other side." Vasquez has a great gift for sounding as pissy as I feel – an unintended affirmation from one curmudgeon to another.

In Auto Pilot Vasquez creates a perfect lyrical dialectic between hope and despair:

How many Funeral homes can you fit on one street

And how many horrible stories seem to be on replay

Everyone is on autopilot and half asleep

In the 4th verse he sets up the opposite sentiment:

This world will always be a beautiful to contrary belief

For people with good hearts, that will give it all

And not worry about the end result

Please show that you care and lend your hands

Because it might be good for the common man

And people in trains and in their cars

Don't sweat it so much things have to be hard

The Golden Gun is a folk blues that speaks of street violence and the terrible price we all pay for allowing our government to engineer an all but forgotten underclass of people born into violence, poverty and exclusion.  A military shuffle in the middle eight completes the ominous message of the song.

The last song on the CD My Beautiful Boy gives us hope for redemption and renewal. It's an honest portrayal of what its like to be a new parent -  a young father - to experience the birth of a life that you helped create. It is at once a historical event, involving countless and nameless ancestors and a "brand new story"

One could complain about the muted sound quality, the muddy mix and primitive production values on this disc. It ain't pretty. But that is precisely what makes this disc a near masterpiece with rhythms and dissonant sounds that match the rattle and hum of the streets.  It's raw and it's honest. The message in the stark musical backdrop is a revelation – blemishes and all.            Maybe it's great because of the blemishes. This is real music not that analog crap that has made our music inhuman and disposable - codified by particular riffs, chord progressions, and hooks that are known to sell to a somnambulant public.

If I had my say Life & Liberations would be the breakout disc of the year.

Motown Night with The Soul Xpress Band on the Princess Wenonah