In Loving Memory of AL LIMBERG

An Architect of Sound & Connection 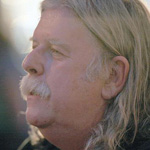 “It doesn't matter how much money you make as long as you love what you do.”
- Al Limberg
With the recent passing of Al Limberg, the Tri-cities has lost a significant linchpin that helped hold the musical community together not only as a top notch sound technician, but through his expansive commitment to all facets of our cultural community.  The simple truth is that Al had a sense of engagement that felt incumbent to bring power, coloration, and depth to whatever talent or voice took to the stage. And he carried those values through with his personal commitment to any artist struggling to make a difference in our world.
At the age of 61, Al left us all too soon on the evening of October 24th after suffering complications associated with congestive heart failure. He is survived by sons Carey and Grant and daughters Alyssa and Virginia, and his grandson Teagan.  Born in Midland, Limberg graduated from Michigan State University in 1973 and soon after opened Watermelon Sugar Instruments in Old Town Saginaw in the late 70s, right around the same time that the Review offices moved into Old Town, at a time in the 80s and 90s when the local music scene truly flourished with live music beaming from a half dozen bars & nightclubs down the strip.
Al brought clarity to the talent emanating from stages big & small. And while heaven gains a strong, intelligent, and gifted spirit, all of us that remain are left to digest the memory, significance, and contributions of Al Limberg.
Al was a dedicated artist and architect of sound who understand the power of music to redefine the context in which we live. For decades he has been a fixture on the music scene in the Great Lakes Bay area that helped to shape it as much as the artists taking to the stage, bringing artists that we love to life.
Al's gifts and talents did not go unnoticed. Al secured over 18 sound & lighting honors over the past two decades from fans at The Review Music Awards; and in 2007 he won a Special Award for the Individual Making the Biggest Impact on the Scene in the Last 20 Years, which was a distinction long deserved. He loved what he did and it showed in many remarkable ways.
2011 has been an incredibly rough year - we've lost Leo Najar, guitarist Doug Sheltraw, and now Al. John Lennon once said that celebrity was a bitch because people never recognize you in the present. Their connection to you is forever related to something they know of who you once were and they rarely know how you are now. While Al may no longer be with us, he will forever be omnipresent. If you didn't see him at an important gig, chances were he was there earlier to set it up. Al was a man of 'connection' - hooking up music, artists, community, friends, and family - and making it all better because of his talent.
Al didn't care if the band or artist he was mixing was new or established  - his goal was to make them sound the best that was humanly able.   Amazingly, given all his abilities, Al also didn't believe in charging exorbitant sums of money for his talents, either - especially if the event was for a non-profit organization.  And I doubt anybody can tally the countless benefits he donated services towards for those afflicted with illness or catastrophe.
Musician, and former radio personality Lauren Davis, had this recollection to share back when Al earned the recognition of his lifetime achievement award. “I met Al years ago on a trip down to Hamilton Street to Watermelon Sugar. It was a blistering hot day, sticky to the max, and my guitarist and I were bored, so we thought we would check out this 'new' music store.”
“Watermelon Al was sitting in the rear of the shop drinking a soda and melting at the rate of roughly 12 ounces an hour. He greeted us with a booming hello, gave us the nickel tour, and spent the next hour or so enthusiastically holding animated conversation with a couple of punks who were obviously too broke to do much but window shop. He didn't make a sale that day, and he didn't care. He made some friends, and though he had lots of them, Al seems to be of the belief he can always use more. For Al, it's not hard to do. His personality seems to expand to fill any room meant to contain him.”
Even though he is no longer with us, we will hear the difference that Al made - he set a standard that will ALWAYS be a gauge for the past, present, and future.
RIP my friend.