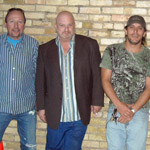 Back in 1971 when George Harrison & Ravi Shankar organized the Concert for Bangladesh, which featured an all-star supergroup of performers including Bob Dylan, Eric Clapton, Leon Russell, and Ringo Starr, it was the first benefit concert of its magnitude in world history, pulling over 40,000 people and raising money for the relief of refugees from East Pakistan after the 1970 Bhola cyclone and the Bangladesh Liberation War.

For Steven Rice and members of the newly formed Michigan Musician’s Emergency Relief Fund, the goal is more modest, yet for music lovers of the Great Lakes Bay Region, equally as admirable – organize an inaugural benefit concert to help musicians in need through raising money that can be used to aid a local musician that finds themselves in a financial emergency.

As a result of hundreds of hours of planning, the inaugural Michigan Musician Emergency Relief Fund Benefit is scheduled to happen on Sunday, October 24th at The Big House in Bay City from noon until close.  Donations are only $5.00 at the door or in advance and the list of performing artists reads like a stellar roster of arguably the finest – if not the most tried & true – performers in the tri-city area.

With 14-hours of music scheduled, the main stage line-up thus far consists of Maybe August, Jedi Mind Trip, The Hipakritz, The Matt Besey Band, The KMJ Band, The Sinclairs, Soul Xpress, The Thunderchickens, Burnaround, Silverspork, 2nd Hand, along with two special reunion performances from Raggedy Ann (fronted by Brian Carson) and Feeding the Machine, an acclaimed local band comprised of two former members of Tantric (Bruce LaFrance and Kevin McCreery along with Fran MacMillan) will reunite for this special and incomparable event.

According to Steve Rice the idea for forming MMERF occurred when his close friend Dave ‘Smokey’ Miller of Bay City passed away recently. “Smokey was a big influence on musicians and when he passed, he had no family,” explains Steve. “His son in California showed up and told me that he had no way to bury his father, so I paid for the funeral and did a fundraiser to get some of the money back.”

“Bruce LaFrance, who lives in Louisville now, told me about a group that had formed in Indiana to help musicians in need. We talked about the idea of forming a non-profit organization geared specifically for providing aid to musicians in need. Seeing as three out of four of my friends are musicians, we decided to hold an event back in June to announce the organization and launch it.”

“Essentially, the idea is to pull sweat equity from musicians together, do these types of shows every six months, and put all the revenue that is raised into a fund. Monies from the fund will be distributed to those in need based on decisions made by the Board of Directors,” continues Steve.

“Everybody on the Board is a lifetime musician that at one time or another earned 100 percent of their living from music,” notes Steve. “To become a member of MMERF there is a $20.00 annual fee, plus you need to work the benefits in some capacity. But if any member gets into a situation, basically you put in a request and the Board will look at it.”

“In the case of ‘Smokey’, if he had money for heart medicine, it is my belief that he would still be alive today,” reflects Steve. “His son had two empty bottles in his pocket, but apparently he couldn’t afford the medicine.  Similarly, recently we had a DJ that just turned 50 undergo open heart surgery. Initially he received Medicaid, but when he was released from the hospital he was told to take Plavix, only Medicaid doesn’t pay for Plavix, so it needs to come out of his pocket. This medicine costs $150.00 to $200.00 a bottle, so hopefully our organization can address these types of needs until the musician can get on a program.”

“Right now the Board is reviewing requests on a case-by-case basis, and if the need is that of a funeral, we’re using our best judgment,” he continues. “We don’t really have any restrictions on requests, apart from the goal of helping musicians in need, so we’ll look at if they are members of the organization, if they helped raise the money, and the nature of their request.”

Presently, the Michigan Musician Emergency Relief Fund has over 1000 people on their Facebook group page; and according to Steve, the process of funding the account will begin with this inaugural event.

“We’re hoping to get 1,000 people through the door over the duration of the concert and sign up people for the $20.00 membership. We’re forming a 501-3c non-profit and hope to see the fund grow with each event. Right now I’m paying for everything out-of-pocket.”

“I chose these people because they were lifetime musicians, plus through my conversations with them, I’m confident they can not only protect money raised in the fund, but dispense and judge requests in the best manner possible,” states Steve. “Once we get enough membership, we’ll hold elections to determine the Board members.”

According to Steve, while the Board is still developing the criteria for requests, if any member musician does have a need they would like the Board to address, all they need do is send in an application for help on the MMERF website.  Because the organization is shooting for a statewide membership, a similar benefit will be scheduled down in Detroit.  “Eventually, we’d like to get away from conducting the benefits in bars and clubs and do it at Vets Park with a major headliner,” notes Steve.

“We will be rotating venues for future events and look at whoever gives us the best value for the buck,” he continues. “Because this is an all ages event, it limited the venues we could select from, as we were looking at venues that serve food. I’ve got 200 hours into this thus far, so we are soliciting volunteers to work the benefit; plus we’ll also have an acoustic stage going with performers like Jim Pagel and Jeff Poirier and his daughter.”

“We’re also going to be doing 50/50 drawings and are putting together some top-notch door prizes,” concludes Steve. “The drummer for Alice Cooper is donating one of his signature snare drugs and I’m hoping to get Kid Rock and some Michigan musicians to donate stuff as well. Additionally, The Big House is donating a portion of the proceeds from the food and drink sales to the fund; plus the sound techs and everything thus far is being donated.”

“It should be a memorable happening.”

The Michigan Musician Emergency Relief Fund Inaugural Benefit on Sunday, October 24th will happen at The Big House, 510 Midland St., in Bay City from Noon until 2 AM.  Tickets are only $5.00.  For more information go to info@mimerf.com