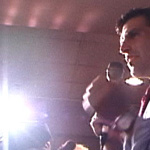 Even though tourist season is pretty much over, when October 11th rolls around, Bay City is certain to become jam-packed once again.

It's not the time of year or even the town itself that will be drawing excitement, it will be the Hells Half Mile Film & Music Festival, kicking off its sophomore year and running from the October 11-14th.

Like no other event in the Tri-Cities, Hells Half Mile culminates exposure for independent films, independent music, and the aesthetic of being the first to check out the best new entertainment from all over the globe.

Like the Sundance Film Festival and similar gatherings around the world, the underground becomes the main event over the course of four days and nights, available for easy consumption between venue and theatre for anyone in the territory of Review Magazine readers' base.

Hells Half Mile Founder and Director Alan LaFave took some time out of his busy day to get the Review up to par with this year's festivity.

"This year our program is outstanding," he begins. "We'll have a phenomenal line-up of bands again this year focusing on alternative styles that rarely get a voice here in Mid-Michigan. There are so many venues around here for rock, blues, jazz, country and cover bands, but so few opportunities for Indie or Alternative bands. The line-up is still being fine tuned at this date, but I can tell you that we have Slumber Party coming in from Detroit. They're a fantastic all girl psychedelic pop band. I think the audience is also going to love The One AM Radio from Los Angeles. I just missed him play in Washington DC at the club DC9 when I was there the weekend of 9/9. But of course, we'll have some local bands represented too."

"The films this year are truly independent and a lot of fun. We had over 100 films submitted to us this year with about 37 time slots available, so the independent film world is really starting to notice us. Documentaries and shorts are going to rule this year including Twenty to Life  - The Life & Times of John Sinclair and Can Mr. Smith Get to Washington Anymore. These documentaries vary from showing a slice of Michigan's rock and roll and political subculture in the '60s and '70s, to a truly inspirational and sobering look at American politics today."

LaFave has built upon the original model for HHM, offering more venues for movies this time.
"We have moved up from three to four screens this year," he notes. "We have three main venues all in downtown Bay City including the State Theatre, the Delta College Planetarium and Learning Center and the Masonic Temple. The Masonic is our main music venue at night and has two screens for films during the day."

"Also, we are featuring more art than last year. During the fest we'll have art displays at the Planetarium and the Masonic, plus, we'll have an Art Show Opening on 10/6 at the Masonic with music and an art auction to benefit the Bay Arts Council funding of the Masonic Temple."

Again this year, HHM is going to highlight big screen projects that may only make it to the Detroit or Ann Arbor areas.

"Last year we brought in a number of films that never made it to local theatres and were big hits in major metros," stated LaFave. "But because we live in a drive-by town in a fly-over state, they never come close to playing here. “Our 2007 program focuses more on giving new filmmakers the opportunity to show their new work - focusing upon the truly independent. Sure, we may have a couple studio films but they are a small part of program."

LaFave has gone out of his way with promotion for the festival and is particular about having the event in the fall.

"We've started promoting months ago through MySpace, plus local and statewide events. I personally handed out info at the Waterfront Film Festival in Saugatuck and the Traverse City Film Festival."


Being able to launch a second year of the festival has been a positive step in the right direction for organizers.

"Our numbers were OK for a first year event, but we know we can blow them away this year," comments Alan.  "We have so much more marketing in place this year than we did last year. The highlight for film last year for me was probably the world premiere of the locally produced film Greener.   The crowds were amazing and the film was well received."

"There are so many people involved in the festival. We're all volunteers and we work as a partnership through the Bay Arts Council. The people involved are not the usual suspects when it comes to Bay City events. We have college professors, teachers, a Bay City Commissioner, and just everyday folks who have a passion for film or music and wish to be part of something different."

LaFave feels the festival is still in its infancy and it's difficult to predict any future numbers.
"Until we're established it's hard to set expectations," he said. "We're just trying to develop an audience as best we can.  Not everything can be everybody's favorite but that's why we offer so many varying styles of film and music."

"People think that the Tri Cities are all about the 'familiar', but I think that's because 'the familiar' is all that we give them. I think if we keep putting new stuff out for consumption, people will like it and they'll seek out more new stuff. I mean, if you're just doing the same as someone else, why bother. New is good."

Part of keeping things new and fresh is to keep people tuned into HHM throughout the entire year, making it a household name and feature for the Tri-Cities.

"We'd love to offer HHM sponsored events throughout the year," gleamed LaFave. "Look for a once a month concert at Wenonah Park next summer featuring original music for the younger crowds. I'm working on that as the Programming Chairperson of the Bay Arts Council. We've talked about bringing in shorts, documentaries and other independent films to various venues in Bay City as well. We've received so many great submissions this year that we won't have slots for everything in our program. We're going to work with the filmmakers to see if they would like to show their films throughout the year."

For more information, check out www.hhmfest.com. The film schedule will be available on 9/26.  Film tickets are $5 each and music tickets are only $10 each night.