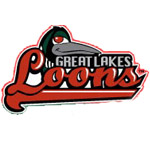 2 - The number of fire pits located at Dow Diamond

3 - The cost of parking on-site at Dow Diamond

7 - The number of vowels in shortstop Francisco Lizarraga's name

12 - The number of luxury suites at Dow Diamond

13 - Lance Parrish's uniform numbers as a player and a manager

19 - The age of pitcher Clayton Kershaw on opening day

23 - The number of full-time people employed by the Loons

24 - The cost of a Loons' fitted baseball cap

43 - The number of closed circuit TV's at Dow Diamond

50 - The number of handicap accessible seats at Dow Diamond

57 - The total number of victories in its inaugural season

67 - The age of William Stavropoulos, the Loons' Founder and Foundation President

227 - The total number of errors committed by the Loons during the season, the worst in the league

312 - What Eduardo Perez batted for the season, which was the third highest in the  Midwest League

1,200 - The number of job seekers who attended the first-ever Loons Job Fair in Midland

4,773 - The average home attendance for the Loons at Dow Diamond

5,515 - The attendance at the Loons' final home game of the season

6,300 - The number of cubic yards of concrete used to construct Dow Diamond