Get Set for a Night to Remember 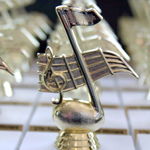 All of us at The Review are excited about our upcoming 28th Annual Review Music Awards Ceremony & Celebration, which is set to commence on Sunday, April 27th in the Genevieve Ballroom at Lumber Barons in Bay City, which is located at 804 E. Midland Street.  Doors will open at 4 PM and the Ceremony & Performances will begin at 5 PM with many unique and ‘one-time-only’ collaborations planned for this legendary night when the public gets an opportunity to both express their gratitude and also party with their favorite artists and those that put forth a tremendous amount of talent and energy throughout the year that makes the music and helps create the ‘sound’ of our cultural community here in the Great Lakes Bay.

Over the years this ceremony has brought greater attention and ushered the advancement of many notable performers, but what is most gratifying is the fact that the music and artists that we celebrate and honor with this special occasion have branched out in so many notable directions, solidifying the stature of talent that we are fortunate to have among us to cultivate, nurture, support and be proud to call our own.

This ceremony is the only one of its kind that connects people, audience and artist together, as nominees & winners are determined entirely by the voting public at large, and not through the politics and pre-dispositions of a special committee.  Yet it also embraces the fact that musical talent and quality is more than a popularity contest, so also incorporates a flight of ‘Critics’ Choice’ awards determined by a panel of critics, club owners, and DJ’s that this year included Trish Lewis, Lynn Roberts, Matt deHeus, Bo White, and many others into the mix.

An important point that I find inspiring is that over 7000 people took the time to register and actually take the needed time to nominate and support such a varied and broad pool of talent, proving that when it comes to overall talent, there are certainly no losers, as each musician and artist nominated is worthy of recognition in their own respective right, having distinguished themselves by making it to the top of the list through the entire balloting process.

What follows is the Program Itinerary & Schedule for this year’s ceremony. This will be a memorable and high-spirited evening of unparalleled entertainment that we urge you to not to miss. Meanwhile, if you have any questions about the Ceremony, feel free to phone me at 989-780-4162.

4:00 - 5:00 PM • Video Highlights of Previous Awards Ceremonies. A retrospective of musical history in the making, spanning 26 years of performances and highlights from the Review Music Awards.

5:20 - 5:55 PM • Jeff Yantz & the Barnhands
Jeff Yantz has been called a rustic troubadour and perhaps the description fits. Jeff will be introducing you to a pocket full of songs from his new release “That’s the All of It” with the help of two of his steady Barnhands: Jeff Schrems (Bass, Banjo) & James Nelson (Accordion, Melodica, Harmonica, Keyboards) and who knows who else may lend him a hand raising the barn? Yantz is a singer songwriter from Bay City who has been writing, recording, and performing his songs since the early 90’s. He cut his teeth as a writer with his band One Trick Ponies who won the very first REVIEW AWARDS Best Original Band award in 1996. “That’s the All of It” is a folk-centric project recorded over the last 2 years with a sound resulting from an affection for warm tube sound boards, ribbon microphones, and the efforts of some the outstanding musicians from the Great Lakes Bay Region.

6:25 - 7:00 PM • The ORGANization -  2B’s or Not 2 B’s
In a series of annual concerts produced by Midland’s Fulkerson Music Studio, “Hits of the Hammond B3 II” will feature organists Dan Sliwinski and Michael Brush along with a stellar lineup including Jim Fulkerson, Bryan Rombalski, Michael O’Brien, and Bo Briens. Tonight’s presentation title by “The ORGANization” refers to the questionable presence of two Hammond B3 organs.

7:45 - 7:55 • Michigan Music Hall of Fame Lifetime Achievement Inductions • Al Limberg & Jim Schmidtke
As the founders behind the music store ‘Watermelon Sugar’, Al and Jim took the notion of what a music store could be to an entirely new level with unparalleled support to the unique endeavors of each of their customers.  They nurtured the needs of the Great Lakes Bay Music scene in numerous ways and fostered the ‘sound’ of the scene both on the stage and in the recording studio.

8:10 - 8:40 PM • Greta Van Fleet.
With the unique and crafted compositional skills of Jacob Thomas Kiszka, the writing artistry and blood curdling wails of Josh M. Kiszka, the rip roaring thundering behind a set of drums Daniel Wagner, and the analytical fusion and well rounded vibrations of brilliant musician Samuel F. Kiszka you have an unforgettable classic rock foundation with a blues descended vibe and on various occasions vocational cross fire between folk, and perhaps a handful of other genre sounding variable. Greta Van Fleet has a raw, perpetual, energetic, and dynamic performance hardly seen anymore in today’s world, a sound that will live on forever and stand the test of time.

9:00 - 9:30 PM • Spitzer
Spitzer received the honor of being selected ‘Rap Hip-Hop Artist of the Year, Best Promoter, Best Performer & Best Rap Hip-Hop Songwriter at the 2013 Review Music Awards.  His line-up tonight includes: Spitzer (Mike Spitz)- Vocals, Shawn Yancer- Lead Guitar, Robert Conway-Drums, Derrick Fisher-Bass Guitar, Matthew “Snakes” Heller- Turntables, Special Guest: Kyle Mayer, of Thick as Thieves. Spitzer will be performing a few songs off the Tattoo Music Mixtape and a couple new ones as well. “Our set is one of a lot of energy and emotion, infused by Rock and Hip Hop.  We are definitely all excited to perform at this year’s award ceremony,” comments Spitzer.

9:45 - 10:15 PM • Rocktropolis
ROCKTROPOLIS is a progressive rock band that is like a volcano ready to explode upon your ears. Members include guitarist Pete Metropoulos, Bassist and Keyboardist Sam Metropoulos and Drummer Marc Stemmler. Influences are Dream Theater, Rush, Yngwie, Yes, Deep Purple and Iron Maiden to name a few.   ROCKTROPOLIS has worked with The Process, Gabe Gonzalez (George Clinton) and former drummer John Macaluso (Yngwie Malmsteen, ARK and VOX). Multi instrumentalist Sam Metropoulos has collaborated on several albums with The Process, played with John Macaluso and has opened for Yngwie Malmsteen. Akin to the pillars of the great Parthenon, drummer Marc Stemmler provides the foundation for which
ROCKTROPOLIS bridges the hemispheres between classical and progressive rock music.

10:15 - 11:00 PM • Dani Vitany & 10 Hands Tall
Ten Hands Tall will be setting their sights on getting closer to Nashville and doing a lot of touring in 2014, focusing most of their energy on writing original material for their first CD.  At last year’s Review Music Awards lead singer Dani Vitany captured Female Country Lead Vocalist of the Year and lead guitarist Barry Forster picked up the Country Instrumentalist of the Year. The talent doesn’t end there - Ten Hands Tall is anchored by veteran drummer, Dan Currier and bassist, Rick Brown, in combination with versatile guitarist Jerome Ratell and multi-instrumentalist Billy Gunther. You can see their schedule on their website at www.tenhandstall.net or on Facebook at Dani Vitany & Ten Hands Tall.

11:00 - 11:40 PM • Blues Mobile
Blues Mobile is a multi-talented band geared towards playing music born in the U.S.A., both original tunes and classics. Each band member brings a wealth of experience and talent to the group. Playing the blues, with a lean toward rock ‘n roll, Blues Mobile creates an atmosphere of letting the good times roll while appealing to a diverse audience. Members include Gypsy James on bass & vocals, Scott Causley (formerly of The Burdons) on drums & percussion, Luann Ervin - a powerful vocalist with a keen sense of music and emotion, Craig Ziegler on lead guitar, with a style strongly influenced by Jeff Beck, and Bob Charleboix on keyboards, guitar, harmonica and vocals.

11:45-12:30 AM • The Hipakritz
The Hipakritz is a local rock band that has been on the scene for over 13 years. They have had many different members and are known for starting the careers of some of the well-known local musicians in area bands. They have a huge alumni and have always put fun and entertainment at the forefront of their shows. If you haven’t seen them before then you have probably been living under a rock.