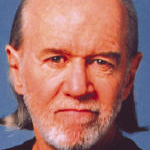 It started with seven words. Not just any seven, mind you, but THE Seven Words that, until 1972, would remain taboo to the point of ridiculousness. While they may have blemished George Carlin's radio career, those particular expletives launched him into superstardom; setting the standard for a new and frank approach to comedy. Those infamous words also egged on a landmark court case in which the FCC firmly put down a mighty foot on "indecency".

In its wake, all the fuss and fidgeting made it clear that George Carlin had succeeded in doing what he, inarguably, does best: He thumbed his nose at the big guys and got people talking about the very things that the "system" tried to hush.

Claiming that he was born with the right to bitch, George Carlin says he has always had a clear vision and life plan. From the age of 9, he says, he had written goals to do comedy and be in the movies. Though he'd seen a few detours and perhaps picked up a few superfluous sidelines, he seems to have remained true to course.

Born in New York in 1937, his mother and older brother, Patrick, would flee his father when Carlin was just an infant. Raised by Mom in what George would later call "White Harlem" (largely because it sounded tougher than "Madison Heights"), he would get his first taste of independence when he joined the air force as a radar technician recruit in 1954.

Of his short military enlistment, which he describes as a legal means of dodging the draft, he says "I was very good at the things they trained me forŠI had the highest T score at that time. I was a behavior problem because I didn't arbitrarily accept what the system put down."

Inexplicably, he did manage an honorable discharge, emboldening the disdain for authority, which would become the framework for future acts of random belligerence. For Carlin, a high school drop out who quickly racked up three court Martials and several article 15's, an opportunity for an off-base radio gig at a local radio station was just the ticket. It would eventually lead Carlin to a gig as announcer in Boston, though he would hardly reach tenure. Within three months, WEZE fired him for driving the news van into New York to buy pot. Later that year, Carlin would take a 7 to midnight job at KXOL at Ft. Worth Texas.

In Texas, George Carlin would meet the man who would point him to the world of stand-up. Jack Burns had formed a comedy routine and recruited Carlin to do standup with him at area nightclubs. For the next few years, they would take an occasional radio gig and make their first television appearance on Jack Paar's Tonight Show in 1960. Burns & Carlin split amicably, and Carlin would make another appearance on the show in 1962, this time solo. He would go on to make regular appearances on the show, becoming a frequent guest host over the years and earning him the spot as host of the premiere of "Saturday Night Live".

In the 1970's, Carlin had begun to score bit parts in movies, comedy writing, and was about to release his biggest solo album, Class Clown. Simultaneously, George Carlin's affinity for getting high was well on its way. He'd dropped his first hit of acid in 1969, beginning a lengthy love affair with drugs and alcohol that would chain itself to him for decades. His self-abuse was legendary, leading him to three heart attacks and numerous health issues.

As though an irony unto himself, George Carlin began edging his comedy toward making deeper social statements, all the while becoming what he loathed most: subservient.


George Carlin was always the guy to point out hypocrisy. Yet, perhaps predictably, the man who made a career out warning people not to fall prey to The System became a pawn of the ultimate dictator: Addiction.

Even Carlin admits that this particular demon proved a difficult battle. It wouldn't be until December of 2004 that George Carlin would stare it down, announcing that he was voluntarily entering a drug rehabilitation facility to receive treatment for his dependancy on alcohol and painkillers.

His dependencies aside, Carlin's Gollum-esque appearance and post-hippy/hyper intelligent commentary still garner a faithful following. Some view him as caustic and hateful; a bitter, mean little man with little to do but bitch about everything. Others view him as astoundingly adroit and on point. In fact, in recent years, and much to the dismay of the Rush Limbaugh's of this world, George Carlin has been increasingly recognized as one of the greatest social commentators of our time.

Even Carlin finds that amusing.

Perhaps George Carlin's longevity can be attributed to the fact that he actively addresses that which will offend, and explores the reasons for society's distaste for it. He's not as interested in shock value of an idea, so much as the fact there is any value placed on it to begin with.

Inside the George Carlin fan-base bubble, it is universally understood that to George, nothing, absolutely NOTHING, is sacred.

Some would call that very idea evil. He simply sees it as reality. George Carlin points out that his observations are based on real thought, not conditioned response. He points out that if we are all made of the same atoms as everything else, "From a Coke machine to a cigarette butt on the street" than we shouldn't hold anything sacred.

To that end, Carlin is a staunch and unapologetic atheist.  His reasons seem to boil down to that lifelong disdain for authority.

Hey. If you're gonna buck that authority, you might as well go all the way.

It's not surprising that Carlin has integrated these beliefs into his comedy. He has deigned not only to pick on human kind, but to poke fun at God himself. He has denounced theism throughout his career, even proving his point by entering a newspaper contest with a mock religion he called "Frisbeeatarianism".  The basis of the belief was typical Carlin: "When one dies", he says "his soul gets flung onto a roofŠand just stays there"


Casting his spritual die with humor, Carlin also points out that he's found more reasons to worship the sun than what he calls "The Man in the Sky".    "First of all" he says "unlike some other gods I could mention, I can see the sun. It's there for me every day. And the things it brings me are quite apparent all the time: heat, light, food, a lovely day. There's no mystery, no one asks for money, I don't have to dress up, and there's no boring pageantry. And, interestingly enough, I have found that the prayers I offer to the sun and the prayers I formerly offered to "God" are all answered at about the same 50-percent rate."

He also notes that he prays to actor Joe Pesci, because, he says "He's a good actor..looks like a guy who can get things done!"

"They (people) are superstitious, they have these beliefs, these primitive, you know, people ..I mean they're just really kind of credulous, and gullible. People believe in, for instance, hell and angels, okay, these are very primitive, very, very backward to me, backward sounding beliefs"."..these are child-like," says Carlin "and that's the key, because they get you when you're a kid, they get you when you're little, and they tell you there's a God."

"..after that, Carlin points out "you can add anything you want.."

Weilding a sharp tongue and a cynical approach to conformity of any kind, Carlin has no compunction about pointing at stupidity. "The IQ and the life expectancy of the average American" he says, "recently passed each other going in opposite directions."

He has expressed his utter hatred for people who wish you a nice day, want to shake your hand or so much as wink at you from across the street. Despite the offensiveness of it all, somewhere behind George Carlin's ongoing tirades about pleasantries and politics, sex and symbolism, God and government, there is a tremendous ring of truth.

Love or hate him, Carlin points out what is ugly and fantastically frustrating about the human race. He does his best to make people think about the structures they place around their lives. He's spent a lifetime pointing out that the little hypocrisies, like the words we choose to communicate with, and the big hypocrisies, like the way we treat one another, are inexorably intertwined. And despite the claims made by those who like him least, he doesn't play favorites.

Rush Limbaugh, even he couldn't pigeonhole George Carlin as liberal OR conservative.  The proof is out there: Carlin has railed on environmentalists as readily as the Christian Right. He points out the fact that while homeless people suffer in the streets, hundreds of acres of land are cleared every year to build golf courses and churches.  He makes us recognize the possibility that while tree huggers rally to save the planet, the planet has done just fine tolerating us thus far. He even goes so far as to say that when Mother Earth has had enough, she will simply swallow us up and start over again.

may have happened before.

Surely nobody could claim that George Carlin's ideology is aligned with theirs. He's simply disgusted with everyone, equally. That is, perhaps, why we find his perspective so useful.

Once he was asked what he felt human evolution was leading to.  His response, heard in a late 1990s interview with Coast-to-Coast icon Art Bell, summed up his view of the human experience as only George Carlin could do it.

"I think we're already circling the drain as a species." he said

"And I'd love to see the circles get a little faster and a little shorter."

George Carlin will be performing at The Temple Theatre as part of the 'Mainstage Series' on Thursday, October 26th at 8:00 PM. Tickets are available by phoning 877-754-SHOW or online at www.templetheatre.com