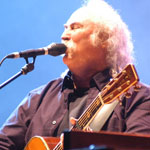 There was a time in the not so distant past when Rock music started proving that not only did it have the potential to change the world, but indeed possessed the power to alter the political, cultural, and social climate as we know it.

On the West Coast, bands like Buffalo Springfield, The Grateful Dead, and Jefferson Airplane merged the topical pleasures of psychedelic drugs and new notions of social & sexual morality into a cultural phenomenon known as the Hippie movement, while here in Michigan Iggy Pop and The MC5 were staking their own unique ground by turning the volume up on the notion of transforming the cultural parameters being redefined by the power of rock music into political ones.

So it was more than the mere entertainment factor that brought a sold-out crowd to The Palace of Auburn Hills when legendary icons Crosby, Stills, Nash & Young visited Michigan on August 31st - it was the sense, which one could feel in the air, that the last and most musically successful exponent of Woodstock Nation was still standing intact, surviving death, drug overdoses, and burnout; only now more determined than ever to prove that through the strength of music, not only could they empower people with the hope that the past was not lost, but inspire them to action in terms of reclaiming and re-defining that hope for the future.

The Michigan appearance fell on the final leg of their Freedom of Speech Tour and with good reason - as they took to the stage for the first part of what turned out to be a three-and-a-half hour set, it was apparent that CSNY were intent on not only polishing edges of their group interaction, but emphasizing the urgency of their message in the state that gave birth not only to the UAW, but also the SDS. In short, they didn't want to pull any punches, musically or topically.

Opening with Carry On from the classic Déjà vu album, each of their voices displayed remarkable harmonic clarity. With all four members playing guitar, accompanied by a hired rhythm section, it was obvious that regardless of Crosby's liver transplant, or any of the other ravages of age, those inimitable harmonies that have resonated through the decades remained sharper & fuller than the sound of bells sounding a clarion in the subtle embrace of soft winds on a Spring day.

Moving through Wooden Ships and Long Time Gone from the debut CSN album, while it seemed Neil Young's signature guitar growl seemed more subdued, the interplay of lead parts with Stills registered on almost a psychic scale, with each guitarist reading the other's thoughts and trading off solos in a seamless fashion.

Warmed-up through this opening medley of 'oldies', Graham Nash sat at the piano to kick off the opening strains of Military Madness, a self-penned hit from his first '70's solo album, changing the line 'I hope the world discoversŠwhat's driving the people wild' to 'I hope George Bush discovers...' and upon conclusion commenting, "I wrote that song 30 years ago thinking about my father and we're still caught in this madness."  At which point Young added, "But we're more distorted than we used to be."

It was at this turn of the show that the focus turned upon the overtly political and the band that penned such anti-war anthems as Chicago (about the Chicago Seven Trial) and Ohio (about the Kent State killings) proved their outrage wasn't limited to the past.

Earlier this year Neil Young released a new album entitled Living With War - a scathing indictment of the War in Iraq, current environmental policies, and the plaque of consumerism.  Indeed, if not for this creative spark, the four probably would not have toured together. Nonetheless, ironies did abound at this point.

With ticket prices ranging from $80.00 to $350.00, it wasn't exactly like the group was courting the frayed denizens of Woodstock Nation that freely allowed their 'freak flags to fly'. Then again, maybe it's just the price of gas involved hauling 16 vans around.

Regardless, Young has said that today American's don't protest, they blog. For him it's not enough. It's not the way of the sixties. So rather than sit around and wait for someone else to pick up the reins of the revolution, Young penned a series of songs that pull no punches.

Beginning with the eco-friendly After the Garden, which poses the question of where do people go after the garden is gone, through Living With War, Shock & Awe and The Restless Consumer, the ante was fully raised and it was obvious that more was at stake than mere nostalgia.

With the band fully throttled and at full amperage, Young went to work like a Rockstar Rapper with Meaning:

Having worked the audience into a frenzy, CSNY stepped back a bit to perform a few more classics like Almost Cut My Hair and Déjà vu before taking a brief break, returning to perform another 90 minute set including such timeless gems as Helplessly Hoping, Our House, and Only Love Can Break Your Heart, with Neil on the piano and the remainder of the band huddled around microphones for the beautifully rendered chorus.

Other highlights in this set consisted of Crosby's Guinevere and Still's closet classic Treetop Flyer (centered around the topic of drug smuggling).

However, it took until the encore for things to really bust open in terms of audience escalation, as the group opened with Young's vitriolic Let's Impeach the President.  While clips of G.W. Bush flashed on the overhead projection screen showing various times of 'flip-flop' statements, Young pressed on, singing:

Let's Impeach the President for lyin'
And misleading our country into War
Abusing all the power that we gave him
And shipping all our money out the door.

Who's the man who hired all the criminals?
The White House shadows who hide behind closed doors
They bend the facts to fit with their new story
Of why we had to send our men to war.

At this point, I thought I was in the middle of Grant Park circa 1968, as the crowd instantly divided into pro and anti Bush segments, half of the stadium cheering while those in the $350.00 seats stood up and started flashing the band the finger and booing, a bizarre concoction of vocal cheers and low-registered jeers.  Rock 'n roll, indeed.

Followed by the Buffalo Springfield classic, For What's It Worth, penned by Stills & Young back in 1967, the set closed with Chicago, Ohio and What Are Their Names, As all four harmonized a cappella on Find the Cost of Freedom, photos of U.S. combat fatalities since March 2003 appeared on a screen behind them and were tallied on a running meter below until it stopped at 2,557.

If boredom and predictability is a plague that shrouds too many concert experiences, clouded by the bean counters that comprise the bulk of the modern entertainment industry, CSNY proved that apart from being able to shout as loudly as Bill O'Riiley, while four aging millionaire hippies might not be able save their country; their commitment to speak freely and hold true to ideals first championed during the Vietnam War highlights how they don't have to cultivate the compromise of harmless nostalgia, either.