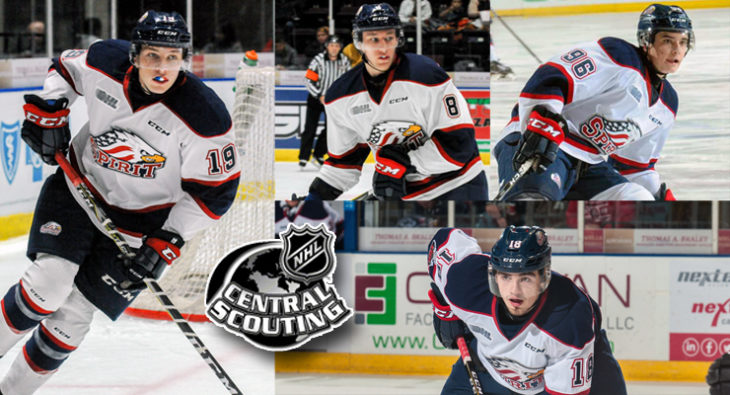 Four Saginaw Spirit players have worked their way onto the NHL Central Scouting midterm list, which ranks the top 222-North American skaters eligible for the 2018 NHL draft, taking place on June 22-23 at the American Airlines Center in Dallas, TX this summer.
Three of the four Spirit players on the list (Blade Jenkins, Caleb Everett, and Max Grondin) had previously appeared on the NHLcentralscouting.com preliminary ranking list in early October, while Damien Giroux has recently earned his way onto this midterm list following a great start to the 2017-18 OHL season as one of the top players on Saginaw's most productive line this year.
Jenkins, a native of Jackson, MI spent last year playing for the United States National Team Development Program, where he had previously committed to play NCAA hockey for the University of Michigan until choosing to sign with the Spirit, where he appeared on the first NHL scouting list with a 'C' grade (which translates to a possible third or fourth round pick) before catapulting to No. 24 (out of the top 222-North American skaters) on the current list.
The 6-foot-2 Jenkins hit a speed bump early in the year, recording just 1-assist in his first nine OHL games, but everything started to click after scoring his first career OHL goal against the Peterborough Petes back on Oct. 22, which led to 28-points (14-goals, 14-assists) in his next 35-games, up until now, where he's currently fourth in scoring among OHL rookies with 30-points (15-goals, 15-assists) just two points behind Barrie Colts' rookie Andrei Svechnikov (32-points) who happens to be the No. 1 ranked player on this NHL central scouting midterm list.
Everett, who is also from Jackson, MI initially appeared with a “C” grade in the preliminary list by NHL central scouting as the only Spirit defenseman to make the list, and like Jenkins, he also moved up, coming in as the No. 86 overall ranked player on the midterm list.
After battling a shoulder injury early this year, Everett, a 6-foot-2 rookie defenseman has had a good first season with 17-points (4-goals, 13-assists) through 35-games on the Spirit back end this year.
Giroux, a second year Spirit forward from Van Caron, ON led all Saginaw rookies in scoring last year with 25-points (8-goals, 17-assists) in 53 games, and was snubbed on the preliminary list from NHL central scouting, but Spirit coach Troy Smith was so impressed with Giroux, he named him one of the assistant captains coming out of training camp.
Ever the overachiever, Giroux has become of the top producers on the 2017-18 Spirit team with 32-points (14-goals, 18-assists) in 44-games, making scouts take notice as the 177th ranked player on this NHL central scouting midterm list. Don't be surprised if the kid from Northern Ontario makes an even bigger jump in the final rankings.
Grondin, a 6-foot-3, 200-pound second year forward from Hearst, ON (the same small Northern Ontario town that produced Claude Giroux of the Philadelphia Flyers, although no relation to Damien) finished second on the team behind (Damien) Giroux last year with 11-points (6-goals, 5-assists) in his rookie season, also earning a “C” grade in the NHL central scouting preliminary list.
A hard working forward, Grondin, has developed into one of the leaders on this Spirit team, with 17-points (7-goals, 10-assists) in 42-games, coming in at 211 on this midterm list, expect Grondin to move up in the rankings when the final list comes out at the end of the season.
The Spirit will make a trip to Kingston, ON for a 7:30 pm road game against the Kingston Frontenacs at the Kingston Memorial Auditorium Friday night, before returning for two home games, hosting the Windsor Spitfires at 7:05 pm Saturday and the Soo Greyhounds at 5:30 pm on Sunday afternoon, with both games at the Dow Event Center.
Miscellaneous   Rock   Rap/Hip Hop   Country   Jazz   Blues