A Portrait of Government with Legislators on the Take 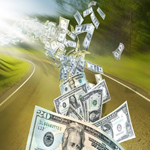