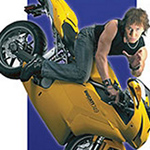 As our interview with Jason Jewell demonstrates, illusionists are starting to levitate above the fray of 'traditional' entertainment and starting to stake a claim as the new breed of 'rock stars' for our time.

Indeed, another 'new breed' entertainer with a truly spectacular show who will be making his way through mid-Michigan is Curtis Adams, whose new show ADRENALINE - A fusion of dance and illusion!" features non-stop laughs, cutting edge dance and state of the art visual effects.

Adams will be performing at Saginaw's Temple Theatre on May 10th with his new and totally original show, which Showbiz Weekly says "rocks with high energy appeal to all ages." Whether Curtis is cloning himself, melting through a sheet of steel, or stopping bullets in mid-air, this show pushes the limits and sets the benchmark high for live entertainment.

Similar to Jason Jewell, Adams began performing professionally at the age of 10. By age 11, he created his very own production company The Magic Of Curtis Adams, Inc.  Soon he became one of the youngest illusionists to perform in casinos all throughout northern Nevada.  At the age of 17, Curtis was hand picked by Master Magician, Lance Burton, to represent the world's greatest young illusionist in FOX Family's "Young Magician's Showcase".

"I don't know how he got to be so good at such a young age!?" says Burton.  Adams has collaborated and trained under a very prestigious name in magic, creative director Don Wayne.  Don is best known for creating and producing material for David Copperfield's TV specials as well as his live tours including such tricks as Copperfield's "Disappearance of the Statue of Liberty", "Walking Through the Great Wall of China", "Flying" and "Vanishing the Orient Express".

Curtis then joined forces with Jennifer Chavarria, who is currently MOCA's newest Producer and Company Manager.  Together they embarked on their first collaborative effort rocking the shores of Atlantic City with, "Adrenaline - Magic That Rocks!" packing the house nightly in the main showroom at one of the largest stages on the east coast, "The Tropicana - Casino and Resort".

They have continued to produce his critically acclaimed engagement at "The Plaza - Hotel and Casino" in Las Vegas, making Curtis the city's youngest headliner.  With his fast rising popularity, he has recently started performing and creating a fan base in the European and Canadian markets as well.  Based on the success and momentum of an ever-growing fan base, Curtis decided to embark on his 1st US Tour in 2006.  Due to popular demand he continued touring the US throughout 2007, spreading national buzz.

"Adams saws traditional magic in half!" notes one recent review. Most recently he has joined forces with Cossette Productions, best known for 50 years of television's most highly anticipated night of live music "The Grammy Awards". Together they intend to collaborate and redefine television by creating visually stunning television events that combine music and magic.

For more information on Curtis Adams or his latest show "ADRENALINE" go to www.CurtisAdams.com or to view all the latest tour footage and live interviews go to www.myspace.com/MagicofCurtisAdams.