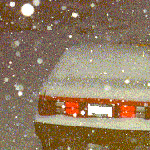 The Saginaw County Road Commission wasn't the only mid-Michigan snow removal agency to pull its plows during the heart of last month's big storm.

Citizens who followed The Saginaw News may have perceived that Saginaw was alone, but neighbor communities did pretty much the same thing.

Brian Wendling is the interim manager of the Saginaw County Road Commission. For eight evening hours as February 6 morphed into February 7, he put more than 30 plows back into the garage and told his drivers to take a break.

Then Wendling faced his own storm: How could you shut down your trucks at the very same time that we need them the most?

He answered at the time that the snow was blowing so hard "You could do a pass and come right back and you couldn't tell."  He also spoke of a need to give the drivers and the machinery some rest for a double shift that would follow when the storm subsided.

"The strategy was ill-advised. Though many county residents are unskilled in the fine art and science of snow plowing, the decision to desist callously cast motorists to the whim and caprice of some very wicked weather.... They wonder first of all where the plows are. They wonder why no effort."

However, the superintendents of the Midland, Bay and Tuscola road commissions said that in their fine art and science of snow plowing, they all took the same steps, as did Wendling.

Jim Young, Midland:  "We did basically the same as Saginaw. That evening (February 6) we pulled our trucks at about 8:30, except for plowing the highways, U.S. 10 and M-20. Hopefully the other men could catch 4 or 5 hours of sleep, and then they would be fresher when the storm started to subside. This is standard practice and strategy in massive ongoing storms. If we're out there in a blizzard, all we are doing is presenting an obstacle and creating a danger. We can only do what the weather will allow us to do. We cannot defeat Mother Nature."

Randy Frederick, Bay:  "We pulled out trucks at about 6:30 p.m. on February 6. It got so bad with the whiteout conditions, the people on the roads still couldn't see, our drivers couldn't see. For us to stay out there would have served nobody's interest. Even on the main highway, it comes to the point where there's not much you can do. We sent the drivers home, told them to get some sleep and to be back by 2:30 the next morning. Everyone understood, at least up here in Bay County, that this storm was so bad, we couldn't stay out there in the middle of the storm."

Jay Tuckey, Tuscola: "At times we have high winds. At times we have lots of snow. This time we had a combination. At about 10 o'clock that night (February 6), we pulled most of our vehicles, except a few of our graders for the main roads. By 2 o'clock the next morning, we felt that the wind and the snow had subsided enough to go back out there. The job is much more than just driving a truck. It's hard work, stressfully hard work. Do you want to burn out all of your people by putting them out there for 14, 15, 16 hours in a row? Or, do you want to put your people to their most productive use?"

Further reaction is from Ed Noyola, deputy director of the Lansing-based County Road Association of Michigan. He says: "There are times when we have to let nature take its course. Is it wise to plow snow off of the pavement, and then to have it blow right back in? Is it wise to use up manpower and machinery that can be put to better use several hours later, when the worst of the storm is over? Our local road commissions in Michigan have competent, smart managers. Any of them would tell you the same thing that I'm telling you."

The Saginaw County Road Commission indeed has faced some issues, including appointments of inner-circle Democrats for generous payments to serve on the board, and including removal of trees on residential side streets.

Still, specifically on February 6-7, Brian Wendling and the road panel conducted themselves in the same manner as all other agencies in the eye of the storm.