Beyond the Horizon - Dylan in Concert 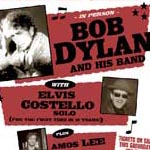 Going to see Bob Dylan in concert these days is a lot like rolling dice. Sometimes your numbers come up, and sometimes you crap out.

There was a little of both when Dylan and his Never-Ending Tour made a stop Friday, October 12 at Eastern Michigan's Convocation Center in Yspilanti.

It was a typical Dylan crowd - old hippies with gray ponytails trying to hold on to what is left of their youth; college kids looking for a glimpse at a living legend, businessmen who look like they swapped their Hugo Boss suit for an Izod polo in the office closet before setting out for the evening.

When the maestro wants to - or is able to - he can effectively gain the attention of the crowd after the opening few notes and keep it the rest of the evening. The evening in Yspilanti started out right as Dylan and his current band, led by superb guitarist Denny Freeman, gave the mostly-full arena a swinging version of "Rainy Day Women #12 and 35," more affectionately known as the "everybody must get stoned" song.

But after the second tune, a solid rendering of "Don't Think Twice, It's All Right," Dylan apparently made up his mind that his "singing" for the rest of the evening would be limited for the most part to grunts and growls.

For those who are familiar with his most recent work, both live and in the studio, this certainly comes as no surprise. And sometimes on that fateful Friday it worked, especially with some of the six songs Dylan played from his most recent CD, Modern Times. Most notable was "When the Deal Goes Down," featuring a sublime steel guitar from Donnie Herron, and the rocking first encore, "Thunder on the Mountain."

And when he spit out the line I hope that you die from the epic and (unfortunately) still-relevant "Masters of War," you could feel the souls of warmongers shaking from here to Fallujah, proving with this and the aforementioned songs that Dylan can still bring the noise when he is so inclined.

But old favorites like "Watching the River Flow," a painful "Stuck Inside of Mobile with the Memphis Blues Again," and a personal favorite from Love and Theft, "Honest with Me," never came close to getting off the ground, and illustrate why attending a Dylan show is often a labor of love even for the most diehard fans, and you get your heart broken just as often as you are able to recall why you fell in love in the first place.

If it wasn't for the band - Freeman, Herron, drummer George Recile, bassist Tony Garnier, and guitarist Stu Kimball, it could've been an entirely wasted evening. The current backing lineup has had its share of ups and downs since joining up with Dylan a couple years ago, but they were in fine form this night. It's too bad Bob himself couldn't get a little more inspired by the effort put forth by his cronies.

Yes, it's a blessing that at his advanced age, we are able to still witness one of the last icons of pop culture still with us. Marlon Brando, John Lennon, James Brown, and others have either burned out or faded away, but Dylan will have performed approximately 100 shows this year by the end of his current schedule.

He does and always will deserve credit for changing arrangements, even changing lyrics to many of his old standards to challenge himself and the audience, and his most recent studio recordings show there's a fire still burning - somewhere.

All was not lost, however. Amos Lee, a young singer/songwriter who is a veteran of many Dylan shows, opened the evening with a sound reminiscent of another blast from the past, The Band. His tight and crisp 30-minute set was followed by an acoustic turn by Elvis Costello, an obvious crowd favorite who combined energy, a sense of humor, and a few well-known hits to make a distinct impression.

But one wonders if Dylan is physically able to perform, willing to do at least some work, or that he is finally getting to the point where his heart isn't in it anymore. It also forces one to wonder about spending their hard-earned cash the next time the Never-Ending Tour makes its way into Michigan.