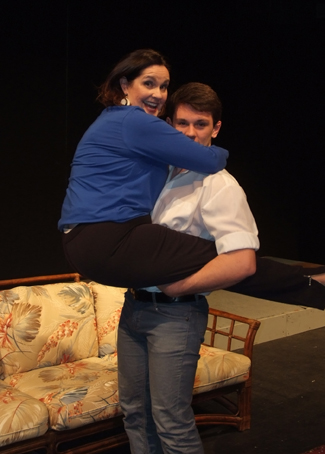 The Tony Award winning comedy Vanya & Sonia & Masha & Spike provides additional proof that when it comes to staging cutting edge contemporary theatre, an elixir of ambition is decidedly elevating the chilly winds of winter throughout our region with an intoxicating elixir of creativity.

First appearing on Broadway in 2013, Bay City Players will be staging the regional premier of this stellar production from January 23 – February 1st.  A comedy revolving around the relationships of three middle-aged single siblings, two of whom live together, the action takes place during a visit from the third sibling, Masha – who supports the other two.

Author Christopher Durang (admittedly an admirer of Russian playwright Anton Chekhov) fashioned together this relatively intricate tale involving Vanya and his sister Sonia, both surrendering to and tolerating the mediocrity of their middle-aged lives in Bucks Country, PA, until their movie-star sister Masha returns for a visit.

With her boy-toy Spike accompanying her, Masha is like nitro-glycerin hitting her family chemistry, inciting all variety of combustion into this family reunion, complete with Hollywood egos, Disney character costumes, and unexpected liaisons that lead to deeper questions and unexpected clarity.

For Director Tina Sills, it’s all about reaction and interaction. “Years ago I read The Odd Therapy - one of Durang’s books  - back in the ‘70s; and his plays take a look at relationships from the level of how ridiculous in some ways we tend to react and interact with one another. Durang went to college with the actress Sigourney Weaver, so he wrote the character of Masha – the actress supporting the family home – around her.”

“David Hyde Pierce played Vanya in the original production and Vanya, Sonia & Masha are all in a sibling group, with Sonia being adopted at age eight. Their parents were Russian literature professors, so they named all their children after Chekhov characters; but the beauty is that you don’t need to know Chekhov to appreciate and enjoy the humor and comedy of this play.”

For Sills the thematic combustion is addictive. “This play is ludicrously funny with a lot of sadness underneath the surface,” she continues. “The themes are Chekhovian: the ownership of the Land Baron and the people that live underneath him – and Vanya and Sonia are still in the family home in Pennsylvania, who moved back to take care of their parents when they turned ill. Vanya makes a modest living as a writer, but the real money is coming from Masha, who as a successful actress is a legend in her own mind, probably.”

“Debra Monroe plays her role and we’ve talked about her character,” continues Tina. “I asked Debra if she thought Vanya was a good actress, and she felt that probably at one point she had the potential, but then got into those sexy alien big-budget movie types of things and compromised her integrity; so that’s what we’re striving for with her character.”

“Spike is her boy-toy – married six times and Masha is coming to town for the weekend to attend a party they’ve been invited to by people down the road who own the old Dorothy Parker home. Upon her arrival she acts as though she’s been running the show, so one of the themes centers around siblings left to care for a parent.”

“All the children are now in their 50s and the play also explores the nature of this conflict between siblings, as well as the conflict between youth and age,” reflects Tina. “Spike is 25 and he meets a young woman visiting her aunt and uncle next door. He isn’t attracted to her, but Spike is Spike – he’s an aspiring actor with boyish and even childlike qualities.”

“Ultimately, I think this play is so strong because at its core it explores what is missing in so many younger generations today because of technology and texting: namely, the ability to communicate to one another as individuals – face-to-face. Kurt Miller, who portrays Vanya, has four pages of a monologue that is very repressed in some ways, but suddenly its like BOOM – right in your face, and wonderful. So many people will identify with this because its wonderful writing.”

In addition to Miller, the cast consists of Debbie Lake as Sonya, Debra Monroe as Masha, Olexiy Kryvych as Spike, Terese Mauch as Nina, and Elise Williams as Cassandra.

When asked about the challenges involved with rendering his role of Vanya, Miller says that while the Chekhovian names are part of the fun, “I find Vanya a kindred soul in a lot of ways. He and his sister had direct responsibility for their aging parents. Vanya is 57 and has regrets about not fulfilling his life’s goals. He is a mediating influence throughout the play, acting as a referee between his sisters, one a successful actor and the other an unfulfilled adoptee, who feels she’s really outside the family circle.”

“The culmination of Vanya’s many frustrations is his uncharacteristic rant in the last scene, which is a four-page diatribe against much of the modern world’s challenges and changes, and a fond remembrance of his 1950s and 1960s childhood – a time when multi-tasking was unheard of and doing one thing at a time seemed like a good idea,” reflects Miller. “If you’re a baby-boomer, this recitation of our childhood is worth the price of admission.”

“Mainly, I love Vanya’s conciliatory nature – his passion for theatre, his cutting wit, and his latent sexual frustration as parts of a very full and complex character – one of the best I’ve had the opportunity to play.”

Possessiveness and ownership are decidedly two of the big themes that Chekhov pursued in his work, which Sills says that you can also see in the interaction between Sonya and Masha, along with its accompanying jealousy. “Debra is playing her character very big because this work does deal with things like regret and disappointment – what we haven’t done in life that we really wanted to do.  It’s all wrapped up in this ludicrously funny, sharp, and witty dialogue.”

Given the careful construction of the script, Sills says that the themes flow from this play naturally; but one thing she is trying to focus upon is that contrast between youth and beauty, age and experience. “Plus Vanya and Sonia have allowed themselves to hang on that cross of parental care, even though their parents have been gone for 15 years, yet they are still living in the house,” emphasizes Sills.

“There are many sibling groups that experience that, which is one of the reasons we are doing a special promotion for this production: “Bring your sibling and get half off your second admission.” Because really - it is the kind of a show that we want to encourage families to attend. Just because we may not have youth on our side does not mean one needs to sit and vegetate. People can always do something more, which I think is another important accompanying theme.”

Sills views the most challenging component of this production as centering upon its newness and unfamiliarity. “The rehearsals have gone really well and right now we’re at a point where the cast needs to get silly, because given these big themes, these are people that feel they need to act silly in many areas, even though they’re dealing with serious topics.  The actors are getting comfortable with that; and it’s a challenge, because it truly is new theatre.”

“This is a very physical comedy, along with the silliness,” she continues. “I’m still working with the actors to get that physicality into their performances and not be afraid of it.  I love doing physical comedy and directing it – when I directed The Odd Couple I had those actors going over the table as well as under it,” she laughs.

“This is one of the first regional productions for this play and we are very excited about it,” concludes Tina. “It’s a mature play and there is definitely some ‘language’ in it, but I also directed Laughter on the 23rd Floor, so I’m kind of over that whole thing,” she smiles.

“This play is a good mid-winter pick-me-up,” she enthuses. “It’s a great way to chase the winter blues away.”

Additionally, given the nature of the subject matter, if you bring a sibling to the show you can get half off admission on a second ticket! Please phone Bay City Players for additional details.