Conjuring Laughter & Irony Through a Comedic Fabric of Motivation 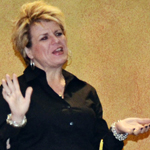 The Bay City Players' production of “And Miss Reardon Drinks A Little” written by Paul Zindel offers local theater goers a rare opportunity to experience a complex yet compelling drama laced with humor, madness and explosive confrontations. In other words, it's about family.
Specifically it's about Mama, who has recently died and left her three adult daughters - Ceil, Catherine and Anna - to deal with the aftermath of her dysfunctional parenting, each in their own way. The web of connections forging the tapestry of their family dynamic forms the nexus of the storyline, as all three of the sisters were raised in a small apartment by their mother, having been abandoned by their father in early childhood.
The three sisters are educated and become members of their local school community: Anna as a chemistry teacher, Catherine an assistant principal, and Ceil the superintendent of schools. Having spent several months caring for her sick mother only to witness her pass, Anna suffers a severe nervous breakdown, becoming a complete hypochondriac obsessed with animals and rabies. On a leave of absence for allegedly molesting a male student, Catherine's reaction to her mother's passing and her assorted accompanying difficulties is to 'drink a little' - and hence the title of the production, from which a litany of action flows throughout the expanse of this production, as Ceil attempts to have her sister committed.
Catherine, played by Debbie Lake of Saginaw, takes to dark humor and copious drink to ease the pain; Ceil, played by Jessica Booth of Saginaw, submerges herself in marriage and a demanding career; and Anna, played by Cathie Stewart of Midland, escapes reality through illness, both real and imagined, plus a fistful of sedatives.
In the midst of this unhealthy melee enter the consummate boorish neighbors:  the nosy but oh-so-well-meaning Mrs. Pentrano (played by Susan Ross of Bay City); and the obnoxious Fleur and Bob Stein (played by Denyse Clayton of Midland and Tom Osborne of Auburn) who each have their own little dark secrets, though initial appearances would suggest otherwise.
While not widely known outside of theatre aficionados, Zindel wrote this play in the late 1960s and the show was first produced in 1967 in Los Angeles, but not published until 1971. When it made its Broadway debut the production ran for a total of 108 performances, with Estelle Parsons earning a Tony nomination for her role as Catherine.
“All these characters are skirting the truth, avoiding the real issues, some more successfully than others,” says director Susan Meade of Bay City. That is, until Anna's medication wears off. "Then everyone gets a dose of what's really on Anna's mind," which, as it turns out, is not for the faint of heart.
“As bizarre as some of these characters seem at first, the truth is we can all identify with some of them, if not all of them, to some degree,” says Meade. “This play combines human foibles and passions with some very creative dialogue - I think audiences will find it mesmerizing as well as entertaining - the best that good theatre can offer!”
The all-volunteer cast has been in rehearsal since late October, a longer than typical schedule owing to the holiday break and some work-related scheduling conflicts. All the cast members have extensive experience in community theater in the Great Lakes Bay Region, including Jacob Sova of Bay City who plays the snarky (but sincere) Delivery Boy.
Meade, who has a degree in social work, and who performed in the first Bay City Players production of “Miss Reardon” in the 1980s, jumped at the opportunity to direct this play. “I have a dream cast playing highly dimensional characters in a play that delves deeply into what really makes people tick. This is a show you never forget.”
Performances of And Miss Reardon Drinks a Little will be held from January 18-20 & 24-27th. Appropriate for adults & older teens, tickets can be obtained by calling 989-893-5555 or by going online to www.baycityplayers.com