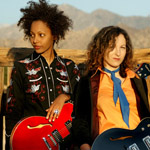 Alicia Warrington has toured the world with Kelly Osbourne and gigged with the Hannah Montana/ Miley Cyrus machine. She was the drummer for one of my favorite Michigan bands, the Gore Gore Girls, building her rock & roll chops with classic garage and punk rhythms.

She’s also a soulful singer and – like all good drummers - a multi-instrumentalist. She left Saginaw in 2001 and became a Southern California girl, close to the action and getting plenty of session work.  She’s made a name for herself in the industry but instead of playing it safe, she ventured into uncharted waters with her good friend and partner in crime in the Gore Gore Girls, Marlene Hammerele.

They formed a duo in 2008 and blurted out a name that stuck – The All Girl Boys Choir. Some have labeled the music Afro-Punk. I see it more as good ol’ rock & roll with a definite garage rock appeal. Time spent on Little Steven’s Underground Garage may have helped shape the sound. It’s more Question Mark & the Mysterians than the Sex Pistols, except when they play it real fast and LOUD.

Alicia has fond memories of Saginaw including times spent at the Red Eye and Jamestown Hall and hanging with some of the great bands of the era like the Miscreants and Smiley Face. They are in the midst of their Never Ending Noise Tour and will headline the Crispy Fest @ White’s Bar on August 7th.

Review: How did you come up with the name? Any special meaning?

AW: We were just tossing some words around when “The All-Girl Boys Choir” came out of my mouth. It just kind of stuck, but it has grown to mean something more for us. This Rock n' Roll game has always been a Boys club. We're here to change that up a bit. We're not afraid to get crazy on stage and shake things up. Ladies can rock out just as hard as the men.

Review: I Love the sound and spirit of The All-Girl Boys Choir. “Western Star” is a cool punk stomp rocker with an economical use of distortion with a cool bridge that borders on electronic. How were you able to come up with such diverse musical elements and insert them into a song that runs 2:44?

AW: Thank you. That song was originally over 4 minutes long. Haha. From a producer stand point; I knew that it had to be chopped down a little. It was being marketed as our single. “Western Star” was going to be the first song that people heard of The AGBC – it needed to grab their attention and hold it. Marlene and I actually love the original version and will most likely release it someday. In writing “Western”, I came up with that twangy-country-ish guitar intro and Marlene added her signature slide guitar on top of it. I just allowed myself to be completely led by the music. I let that song drag me wherever it was going to drag me and that resulted in the mixture of those “diverse musical elements” that you're talking about.

Review: I love “Brand New Flavor” – your musical introduction to your fans. Your music has an eclecticism that is refreshing. “Say it Loud” rocks hard. “Exit Wounds” has a country flavor while “Hundreds of Thousands” has a retro feel like an updated Ventures track. And I swear Track 6 on your EP lumbers out like Zeppelin after Bonham got heavier sticks. Did you consciously try record a disc that could appeal to range of rock & roll fans?

AW: You know, Marlene is a big fan of 50's and 60's Rock n' Roll, Garage, Girl Groups, Sonic Youth, The Stones...and I listen to everything from Dolly Parton and The Bangles to Clutch and Lamb Of God. Haha. So, I think that, when you have two people with vast musical taste and influences – it is inevitable that you're going to hear bits and pieces of everything and that is exactly what happened on “Walking Miracles”.  We consciously wrote an E.P. That appealed to us and hoped that people would dig the tunes as much as we did.

Review: The minimalist production values – use of basic guitar, bass, drums – and not trying to make it pretty and synthesized is the prescription for good old rock & roll – sometimes called garage rock. Was this an intentional decision to eschew the mainstream Top 40 for something more authentic?

AW:  We're not so much into the pretty and polished Top 40 scene. We're into Raw, Loud, in-your-face, good ol' Rock music that makes us want to do high kicks and hand claps...sounds that make you want to get out of your seat and move. Marlene and I are huge fans of (that) MC5 / Ike & Tina Turner Revue-type of energy, that soulful intensity that makes you want to do – something.  Those qualities are seriously lacking and, for the most part, non-existent in today's music and popular radio. Today's Mainstream music is a bunch of watered-down, soulless, 3-chord, over-produced, auto-tuned, corporate embarrassment.

Review: Did your experience with your other bands influence this direction?

AW:  In working with different bands of all genres, I've certainly seen all sides of the music industry. I've seen what matters to most of the record labels and executives out there and – it's not the music. So, in that sense, I wanted to go back to the minimalist, grassroots, DIY approach with The AGBC . I wanted to have more control over the things that matter to myself and Marlene and to continue having fun making music that we enjoyed.

Review: What did you learn from working with Miley Cyrus? Kelly Osbourne?

AW:   I love and have a lot of respect for Kelly and the Osbourne family. They gave me a chance and really helped me learn a lot about the music business and about being a session and touring musician. Working with Kelly was my first professional gig (from 2002-2005) and that job allowed me to get the start that was needed for my career. Sharon Osbourne is such a smart, businesswoman; I've always loved seeing what's next for their family. They are all hard workers and I appreciate that.

I had the pleasure of traveling to many countries with Kelly and we shared so many amazing experiences. I still keep in touch with her and in fact, worked with her again in 2009.  Doing the “Hannah Montana” thing with Miley Cyrus reminded me of the importance of giving people, especially young girls, more options. I realized how important it is to have stronger female role models, to get young people to think outside of their little (Disney box) and to show girls that they can make an impact on the world, without a perfect blonde wig and singing songs about “Pumpin Up the Party”.

Review: Welcome back to Saginaw. Can you talk about some of your fondest memories about your hometown. Where did you gig? Did you have a local mentor? Did you take drum, voice or guitar lessons? What bands did you play with?

AW:   I miss the Red Eye Coffee House – it is always my stop for coffee when in town.  I'm so excited to be playing here again. It's been about 10 years since performing in Saginaw. I always speak about it in interviews because I miss the Saginaw music scene. I've lived in Los Angeles and Vancouver since leaving MI in 2001 and although, I complained about it while living there, I have not found that sense of community amongst bands that Saginaw has.

Back in my Saginaw days, there was a strong network of bands: Miscreants, Absence, Amputist, Smiley Face, Rugby Mothers, Bedlam, Aceldama, you know – the list goes on. I played drums in a few Mid-Michigan bands: Fudgegun, Dropping the Messiah and Purgatory. I remember kids, myself included, renting out Old Jamestowne Hall, Lincoln Hall, and wherever else to host shows. So many people would go to the shows and just hang out amongst friends and bands and you would always have a good time.

Here, in Los Angeles, it's a total competition, “too cool for school” kind of a thing. Bands (that don't know any better) or don't have any options end up “paying to play” and having to sell tickets to their own show in order to get on the bill. People don't go to shows unless their friends are playing, so-and-so is going to be there and can get them on a guest list. So, I do miss the Saginaw scene.  As far as lessons go, I am a self-taught drummer but, I did buy my first drum set from RIT Drums and I took 4 years of guitar lessons at Bay Music (Sadly, I believe both stores have closed). I was taught by Saginaw guitarists, Bill Fiebig and Jim Pagel.

Review: Who has influenced your musical style?

AW: There are so many people, places and experiences that have influenced me. Musically: Fugazi, Faith No More, Sleater-Kinney, Clutch, Heart and many, many more.

Review: When times get rough in the music business who do you turn to ?

Review: How would you characterize your drum style? Guitar style? Vocal style?

AW: Drumming, I've never been a fan of people who over-play. I'm a strong believer in complimenting and creativity - not trying to show off all of your skills in one little song. Haha. My biggest drumming influences are Mike Bordin, Janet Weiss and Brendan Canty so, I would throw myself somewhere into that mix.  Guitar wise, you can tell that I'm someone who listens to a Machine Head record directly after listening to Chuck Berry. Vocals, I'm just singing because Marlene didn't want to. Haha.

Review: Any plans for future recordings?

AW: Definitely! Well, we are in this for the long haul. Our, “NEVER. ENDING. NOISE. TOUR. 2010” starts July 27th in Austin, TX and runs for the rest of the year. We just got rid of our house and everything and decided that we need to stay on the road. We plan on writing and doing a demo while touring, settling back in LA for a few months after Christmas, at which point we will record a Full-Length album.

Review: How busy are you now with AGBC and your outside projects?

AW: I haven't had much time to do other projects this past year. I've spent so much time working on The AGBC. I did however, do a video with Tracy Chapman (Atlantic Records), I did a few local shows and worked with an old band of mine, The Bruises from San Francisco. I am handling The AGBC booking, which is a job in itself. I produced, engineered and co-wrote “Walking Miracles”. I'm doing design work and sharing promo duties with Marlene so...I've been insanely busy but, busy is a good thing.

AW: Thanks so much for taking the time to speak with me. The All-Girl Boys Choir is looking forward to playing the Crispy Music Festival @ White's Bar on Saturday, August 7th. We have a string of MI shows in August so; I hope to see some hometown folks.

We're doing Flint and Detroit after the Crispy Music Fest and returning in October to play The Vault in Bay City. You can get our current tour dates at: http://www.myspace.com/theallgirlboyschoir and if you're feeling like an amazingly awesome person and want to support our tour fund, please visit: http://agbctoursupport.blogspot.com