A Pair of Petition Drives Would Revamp State Government

Special for The Review 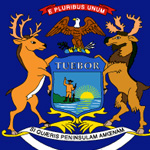 Sixteen years ago, Michigan voters term-limited the number of years that state legislators can serve.

Now a petition drive in 2008 will seek a ballot proposal to limit elected officials once more, this time to a part-time status that already exists in at least 39 other states.

Political activist Greg Schmid of Saginaw also is a driving force between a second initiative this year to establish referendums every two years on all new state taxes.

He says these referendums are non-binding, although legislators could simply reinstate those taxes.

Greg and his father Allan, author of late 1970s property tax caps in Saginaw and statewide, say they are tapping contacts across Michigan.
They will need to produce about 450,000 signatures for each petition by  July 7 in order to reach the November ballot. Both plans would amend the state Constitution.

"Michigan needs citizen legislators who live and work in their home communities, not Lansing politicians!"  proclaims the group's main headline for the part-time legislature drive.

His pitch for referendums explains they will become "a regular fixture" in biannual state elections, "and will focus the campaign issues on taxes."

Review Magazine could not reach mid-Michigan legislators during the days after the New Year, given that they did not immediately return to session, unlike much of the full-time workforce. Their statements will be welcome for a future edition.

However, the views of those who would oppose part-time status are fairly well known.

Foes first assert that they also need time for community meetings and constituent service, not just legislative sessions, especially during an era of regional economic depression.

Constituent counts are about 85,000 in House districts and 240,000 for Senate boundaries.

A second argument against part-time status is that a restricted four-month service period early each year (with special sessions allowed at other times) would preclude many 'citizen legislators' from working during the other eight months because employers would disallow the special arrangements.

The part-time lawmakers would make $40,000, down from the existing $79,650. They also would lose lifetime pensions
The Schmids answer that legislators already have adequate support staff to help with constituents, and that eight months is plenty of time to find other seasonal work as needed.

Given the fact that Michigan has one of the most highly paid legislatures in the union, combined with the nation's top unemployment figures and only one of two states that lost 30,000 people over a six month period, the plan definitely has merit.

Democrats will likely oppose both petition initiatives. Many Republicans will sign on for the tax referendums, but a good number may join the Dems in opposing a part-time legislature.

"That's because the legislative reform is where their paychecks come from," Greg Schmid asserts.

Democratic Governor Jennifer Granholm is among establishment politicians who have said they would support a part-time arrangement in exchange for longer-term limits or outright repeal.

Michigan's term limits of six years for the House, and eight years for the Senate and the Governor are the nation's tightest along with California.

Still, Schmid isn't ready to cut a deal in that direction. He says term limits were the first step and the part-time petition is the second step, even if they are 16 years apart.

"The idea is to create a different kind of character in the legislature, in which people have to go back and work in their hometowns where they will experience the effects of the laws that they pass. They should be getting an earful from the constituents they serve, rather than from the lobbyists in Lansing," Schmid asserts.

An example of objections comes from Sen. Nancy Cassis of Novi, a moderate Republican and former school psychologist, who says she could not have quit her job when she was younger in order to serve. "The time spent in this career as a legislator is so intensive and so time-consuming that unless you walk in our shoes for a week, you never know just how much we do and the sacrifices that our families really make for us to be here," Cassis told the Associated Press' David Eggert.

Schmid answers that 39 states, and as many as 46, seem to do just fine with less than full-time arrangements.
The National Conference of State Legislatures, which is neutral on the issue, describes four states as totally full-time. Michigan is joined by New York, Pennsylvania and California.

Seven other states are listed as 'full-time light'. They are Massachusetts, New Jersey, Florida, Ohio, Illinois, Wisconsin and Alaska. Average salaries are $68,600.

A group of 22 states fill a middle sort of '70 percent time group' with median pay of $35,300. Michigan would join them, with the $40,000 still falling slightly above that average.

Finally, 17 states have half-time lawmakers with typical wages of $16,000.

Michigan previously was in the middle group until the late 1960s, when legislators gradually started to increase their status and upgrade their wage packages.

Schmid says the change had nothing to do with the 1963 rewrite of the state Constitution, but simply evolved on a gradual basis. Last year's count of 130 days in session, the equivalent of 26 five-day work weeks, was an all-time record.
"All we want is to bring Michigan back into the national mainstream," Schmid says.

To raise their pay under the proposed plan, lawmakers would have to cast their votes within three weeks before an election and then face the public.

Schmid is aware that proposals to change governing operations can become bogged down in too many details. This factor, in retrospect, is what hampered last year's proposed Saginaw City Charter reform that took a sharp 5-to-1 thumping from local voters.
The tax referendum petition on the surface is more complex than the part-time legislature concept, but Schmid says it easily could become part of a familiar routine.

Every two years, at general election time, all tax increases or new taxes approved during that time would be placed on the ballot. The language of 'voter repeal' is in the provision, but if a majority of voters indeed said 'NO', legislators and the governor still could simply reinstate the taxes.

The point, says Schmid, is that they would do so at their own political risk.

He adds that other language is intended to address fears of a potential state shutdown similar to last year's scenarios. Any tax repeal that is upheld by legislators would not take effect until the following budget cycle.

"This proposal in no way would create a financial crisis," Schmid says. "It could only create a political crisis, and the intent is to end our lack of accountability for tax laws."

As a first step, voters would have an opportunity in 2009 to air their views on the higher state income tax, 4.35 percent instead of 3.90 percent, and on the 22 percent hike in the Michigan Business Tax. The higher business levy replaced a 6 percent sales rate on services that had sparked strong ire across the state last fall.

"This is an alternative to Axe the Tax, which is obsolete when the service tax is repealed," Schmid says.