Tickets Now on Sale for May 16th Celebration! 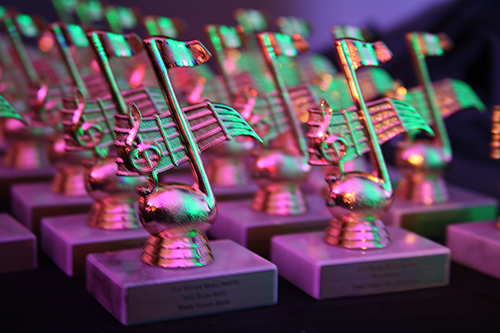 All of us at The Review are incredibly excited and busily preparing for our 35th  Annual Review Music Awards Celebration, which will be held on Sunday, May 16th  from 5:00 - 11:00 PM and staged at the premier performance venue, The Vault, which is located at 110 Florence St. in Saginaw. Doors will open at 4:00 PM and the public is welcomed to attend and celebrate the talents of regional musicians spanning multiple genres of music!

You can also order tickets online by clicking this link.

The list of nominees in the various divisions are listed here.

This annual celebration is focused upon honoring the creative, talented and committed musical artists & individuals that cultivate the creative spirit and nurture the musical soul that defines and distinguishes the unique musical sound of our region. Food will be available.

It is the only awards ceremony of its kind that connects people, audiences and artists together insofar as the public at large determines the honorees & recipients. But most importantly, the single purpose of this ceremony is to bring greater community, statewide, and national recognition to local talent, which we feel has a rich history of being one of the strongest in the state, and giving it the proper notoriety and attention that it deserves.

Guest personalities, cultural, and community leaders will assist in handing out awards the night of the ceremony, while a strong list of regional performers will headline this year’s show with live performances.  For safety precautions, all guests and nominees must wear a mask upon entry.  With seating limited to 300 people, tables will be separated at appropriate distances. The Vault has a 775 capacity and two floors of seating and there is not a bad seat in the house, so there will be plenty of space to accommodate all attendees.

A retrospective of musical history in the making that spans performance highlights and special moments from the past 34 years of The Review Music Awards.

Formed two years ago and featuring the talents of songwriter & vocalist Haley Ann Dorian, guitarist Jeff Scott, drummer Bill Link, and REVIEW publisher Robert Martin on keyboards, collectively this group deliver an eclectic musical experience; with the combination of ear-catching originals and favorite covers spanning multiple genres and ages.  Their original Grey Skies was nominated for ‘Best Single’ and ‘Best Video’ in the 2021 awards and the group is also up for ‘Best New Artist’.  They are also joined on bass this evening by Matt deHeus, who will perform some of his own original material and is a past RMA recipient and nominated in several divisions for this year’s ceremony.

With a message and focus that reach beyond her youthful age, newcomer Kalysta Sylvester is revitalizing a soulful reflection of American musical history. This 21-year old songstress finds her inspiration in the deep grooves of Motown Era Funk and Soul, while also embracing the elegance and class of the ‘Big Band’ era; infusing the entire mix with the passion and energy of Latin and Pop crossover, while keeping her heart beating to the expressiveness of contemporary R&B. She is joined this evening by band member’s Todd Miller on drums, Jaron Jock on keyboards, Andrew Prime on guitar; and Austin Wllette on bass.

This group was formed in 2015 and is one of Michigan's Premier Country Rock Bands. Their members are spread across the whole great state of Michigan from Bay City all the way down to down river Detroit and features former/current national touring musicians. The band lineup also consists of many of the original country elements that gives country music its "pulse" including fiddle, banjo and slide guitar. This mixed with their new aged guitar driven sound with classic country roots, true 3 part vocal harmonies and a rock solid rhythm section, gives them that authenticity that can't be replicated. Performing tonight will be Kyle Palermino, Randy Palermino, Billy Hamblin, Tommy Furbacher, Ken Kudsin and Randy Badour.

David Asher Band is the Roots Reggae Rock project of former co-founder of The PROCESS, vocalist/songwriter/guitarist David Asher and Friends. It is the culmination of years honing the sounds and soul of island music that has been embraced by music fans across the globe for decades. Asher has worked with numerous Reggae Legends over the years including Adrian Sherwood, Dub producer The Scientist, Lee Scratch Perry, Little Axe and many other musical luminaries. DAB's new album features two mixes done at On-U Sound studios in England, and the CD includes two additional bonus tracks mixed by Adrian Sherwood. It also features guitarist David Ivory, drummer Derrick Davis, and bassist William Petzold,

This dynamic Power Pop Trio isn’t just a band, it’s a meeting of the minds of three notable figures: Keith Klingsmith, Andy Reed, and Chris Richards. After first coming together back in 2013, the group is poised to release their third album of original material titled Chapter 3, which also features the talents of their unofficial 4th member, Donny Brown, former co-founding member of The Verve Pipe. Possessing strong vocal harmonies and influences ranging from The Beatles, The Beach Boys, Weezer, Fountains of Wayne, and even the Everly Brothers, the group distills all these influences in a manner that is still original and distinct, possessing a group sound that is anything but derivative, therefore forging a new creative sound in the process

Consisting of Amelia Jo on vocals, acoustic guitar, flute, and bass; vocalist and trumpet player Andy Hahn; Lennard Zimmerman on electric guitar; and drummer/percussionist Terry Poirier, this award-winning group first formed together as a band seven years ago when they converged to nurture and incubate a unique mix of musical ideas that created an innovative hybrid sound that blends Electro-Acoustic Reggae Pop infused lyrically with an expressive and tasty blend of Soul and Hip-Hop sensibilities. Their debut album Pass It On was just released in 2020 and is up for several awards at this year’s ceremony.

When it comes down to women who know how to rock, this all-female rock and roll posse and truly the leaders of the pack. Consisting of Nikki Lynn on vocals, Cheryl Lyons on guitar & vocals, Amber Foster on drums, and Robyn Grimsley on bass and vocals, this group secured last year’s honor as ‘Best Rock Band’ at the 34th Annual Review Music Awards, so we are proud and happy be showcasing them at this year’s celebration.