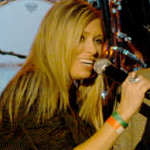 It was an arm wrestling match for the Country Music portion of the 24th Review Awards. No longer spread across the margins among bands and musicians, two groups basically swept away the evening: The 25 Cent Beer Band and Mandi Layne & the Lost Highway.
While a few individual awards trickled in the Country stream, such as Stone Cold nabbing Country Rookie Of The Year, Gary Fobear of the Craig John Band for Best Country Keyboardist, Marty Campbell for Best Country Instrumentalist, as well as the Long Branch Saloon for Best Country Club, it was obvious that Layne and 25 Cent were the past year’s stand-out groups, as both were on hand at the Prime Event Center to collect their respective winnings.
Mandi Layne & the Lost Highway, who also performed a stellar set during the extravaganza, took Best Country Female Singer, Country Band Deserving Wider Recognition, Best Country Songwriter (full band), Best Website and Best Overall Originall  Band.
The 25 Cent Beer Band wrapped up Best Country Band while individual awards went to members Steve Armstrong—Best Male Country Vocalist, Pat Manke—Country Musician Deserving Wider Recognition, and Levi Goodwin—Best Country Bassist, ‘Grateful’ Dave Lone—Best Country Drummer, and Steve Hornack—Best Country Guitarist.
The Review caught up with Mandi Layne, vocalist of Lost Highway and 25 Cent’s vocalist Steve Armstrong following the Review Awards to get their take on the past year, the year ahead, and their personal reflections on the Award Show itself.
Mandi Layne:
“The past year has been unbelievable,” said Layne, via Email. “We finished our CD, Drunk In Love, offered a development deal with legendary producer Larry Butler (Johnny Cash, Kenny Rogers, John Denver, Sammy Davis Jr. and…The Chipmunks). We opened shows for some of the biggest names in country music, played a break neck schedule of shows from here to Nashville (including a three day stint at the most famous country bar in the world, Tootsie’s Orchid Lounge, and had some great radio interviews here on 98 FM and in Nashville on WKDF, and (then) took home seven awards at the 2009 Review Music Awards.”
While the band’s tour bus ‘LeRoy’ (’87 Chevy Mallard Camper) broke down at an intersection in Ohio on the way back from Nashville, not much else was going wrong for the group last year. The group’s set at the Review Awards showcased a tight band with catchy flare and proved that the chemistry is on fire within the group.
“We knew that the majority of the audience would be musicians and their friends & family  and in this area that sometimes means pre-conceived notions of what country music is,” stated Layne. “We had two main goals for the set and they were to showcase originals and to show that much of today’s country music is more classic rock and hard rock then some would think. So we just did what we do and hoped to get and keep some peoples attention.”
Layne and Lost Highway were happy to spend the night mingling with fellow musicians they haven’t seen in a while at the RMA’s.
“We all had a blast! Our schedule is so packed that we never get to see other bands play. The other highlight for us is really just seeing so many old friends like Andy Reed who recorded our CD, Brian Coonan, Troy Miles, Sue White from the Saginaw News and John Nitz from One Pump Daisy.”
“We ran over a giant nail in the parking lot across the street and immediately after our set, we had to change a tire…yea!”
Steve Armstrong::
“Well, over the past year we have been working hard to improve our show,” said the vocalist. “We have added a couple of real quality musicians with the addition of Dave Lone on drums and Levi Goodwin on bass.
“Our plan for the next year is to continue to improve our show. We are going to start spending a little more time working on some original material, and who knows, maybe look at adding some more good musicians to the mix!”
Armstrong was humbled by all the accolades the 25 Cent Beer Band received throughout the evening.
“You never know what to expect as far as Awards go,” he said. “All I know for sure is that our fans are also our friends (and) we want to make sure that everyone that comes out to see us feels like they know us. We try to connect with them on a personal level. Maybe that helped us in the voting!
“Anytime you can get a bunch of great musicians and performers together and let them showcase their talent, that's a highlight for me.”