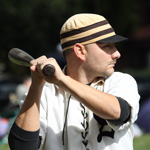 The Saginaw ‘Old Golds’ gained notoriety throughout the Midwest and East Coast this season. The year saw the ‘Golds’ make history at Cooperstown, New York by staging the 1st ever Vintage Baseball Tournament played on the grounds of the Fenimore Home & Art Museum along Otsego Lake and the historic Doubleday Field.

Saginaw played on the same field stepped on by the 1945, 1968, 1984 World Champion Detroit Tigers during the HOF Exhibition Games at the yearly HOF inductions.

The team won a record 18 games this season to bring their three-year record to 49-18 (.731 Winning percentage).

They beat teams from 6 different states, were finalists in the World Champion Reserve Game, Sylvania Cup, Michigan Cup, and scored 6 games in the Ohio Cup 58 to 26 to go 4 and 2 against some of the best teams in the country.

Saginaw (2009 World Cup Champs) lost to Columbus (2010 World Champs) 12 to 11 as time ran out. The team missed winning their third straight Michigan Cup after leading all nine innings, only to watch the La-De-Dahs slip by 15-13 in their last at bat.

The outfield of Chad ‘Shorty’ Short, Sonny ‘The Hustler’ Guerra, and John ‘Lumberjack’ Piersall hauled in most balls sent their way.

Next year looks to be exciting. New uniforms (charcoal gray, Tournament inside a Fort on the Boston Harbor on June 3-4th, a ALS Tournament (Lou Gehrig Disease Fund Raiser) at Hartwick Pins on June 18th-19, the prestigious Gettysburg Tournament on July 16-17, a game inside Fort Wayne in Detroit, and the World, Ohio & Michigan Cup Games.

The team gave presentations to the public at the Humanitarian Series at SASA and the Exchange Club at The Saginaw Club.

Owner Harold Campau came through hip surgery and is back to raising money. Tally Girl Heidi ‘Ho’ Krenz and team photographer Nicole Tesch are working their way through medical issues.

Visit the Website at: saginawoldgolds.com. You can email Richard Curry at clarkson1883@yahoo.com