An Examination of Tattoo Culture & the New Primitivism

Posted In: Culture, Community Profiles,   From Issue 789   By: Matt deHeus 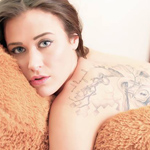 Practiced in many cultures around the world, America can largely thank our sailors for importing the custom of tattoos when they returned to our shores from exotic locales.   For most of the last century, tattoos were associated – for right or wrong -with the stories of military service or membership in biker or neighborhood gangs.  In one way they represented a badge of courage for rough and tumble “real men.”

When I finally made the face-to-face acquaintance of Facebook follow Chelsey Glysz, it was obvious she didn’t remind you of a sailor.  In fact, first impression is she would fit just fine gracing one of the classic pinups that graced the walls of World War II ships and submarines.

What makes models like Chelsey different than those of that golden era is the sailors aren’t the only ones sporting ink.  The anchors and odes to mom of any earlier generation have morphed into elaborate pieces of art, placed on parts of the body both seen and unseen.  The crude tattoo magazines the littered the alternative press that I remember as a teenager have given way to a broadened acceptance of permanent body art in media, fashion and – honestly – everyday life.

Like many great stories, Chelsey’s started through a little bit of luck, a little bit of skill and maybe a tiny amount of accident.  After winning the Best Bartender contest in the Bay City Bar Guide two years ago, she initially started posting informal pictures on Facebook, both personally and on her employer’s pages.  The plan was simply to market the establishments where she worked and increase her own income in the process.

The photos that ensued were straightforward – people having fun, friends out on the town, the obligatory self-shots.  During this period she started to develop an Internet alter ego amongst her circle – Danjer Kat – which was a reference to how much she loves cats.  But a funny thing happened on the way to the tip jar.

Danjer Kat pictures began to get popular and she started to get contacted by professional photographers who wanted her to come in for formal photo shoots.   One interesting fact is that she was getting many of these calls due to her growing collection of tattoos, something that would have driven away many photographers in other eras.

When asked about her introduction to the world of “edgy” photography, she said “It felt right doing it, like I should be doing it.  Getting positive responses to the pictures – even from people you don’t know – was very encouraging.”

“I just saw it as a learning experience.  Right away I loved learning about shooting techniques, camera styles or finishing methods.    I also learned that shy and uncomfortable won’t get you very far.”
Though only 25, her tattoo story started nearly 10 years ago with simple images like the star on her foot.  She now has several signature pieces and plans for a few strategically placed more, though now she relied on the style and execution of tattoo artists like local pro Josh Gerics (The Electric Chair, 606 E. Midland St.)

Turns out this was a lucky / skilful set of decisions for Chelsey, as it coincided with a cultural explosion.   She was the only one with a fascination with tattoos.   And with every photo shoot and every picture published, she was contributing to the growth of a suddenly burgeoning industry based around the “Tattoo Culture.”

If You Mix All the Colors, You Get Black Ink

Estimates for the 2012 revenues for the tattoo industry – licensed parlors, ink and supplies and trade shows – are estimated to be between $2.7 and $3.2 billion dollars.  Growth in the industry is projected to be strong for the foreseeable future.

This swell in sales is fueled by steady inroads across all demographics for tattoos.  Any number of statistics show this trend.  Reputable research by the Pew Center, the American Society of Dermatological Surgery, Harris Polls and my own personal observations all indicate that an increasing number of people have one or more tattoos.  Thirty six percent of all Americans 18 – 25 have at least one tattoo and from 25 – 40, that number grows to 40%.

Another interesting point is that women largely fuel the growth.  Nearly 50% of women between 18 – 25 have a tattoo, with 18% having two or more.  Personal observation - if you care for the opinion of an amateur aficionado – “more” is becoming more popular.

I stopped into VooDoo Tattoo (1010 Columbus Ave, Bay City) to talk to Justin Rodriguez about the growth in popularity of tattoo art.  Justin feels “A lot of it crept into the media … it was on television shows.”

He went on to say “Also, we started to get a lot of memorial tattoos,” where groups or individuals get tattoos to commemorate a person, event of cause.  He also said that, quite often, when he was finishing up someone’s first tattoo, “they were probably already talking about their next one.”

Interestingly, as shown in a Pew Study, while people still primarily get tattoos to feel “sexy” or “rebellious,” an increasing proportion also list reasons like feeling healthy, athletic, intelligent or spiritual. The other thing that is obvious is the art involved in modern tattoos has grown increasingly elaborate.  The crude and simple images and the muted tones that ruled even as few as a dozen years ago have suddenly been replaced in a revolution in color and complexity.  As Justin put it, “there has been an explosion in artistic abilities.”  Nationally known tattoo artists are like rock stars and it is not unusual to find out a top artist has a Fine Arts degree.

The imaginations of the artists have also had the knock on effect of spurring growth in the market for high quality ink.  New formulations and colors make possible the types of details that people wouldn’t have even thought to request a decade ago.

Be Careful Out There

Tattoo parlors in Michigan, as in most States, are regulated and licensed businesses.  Hey have specific regulations covering things like cleanliness, infection prevention, recordkeeping and more.  Many vendors of ink and supplies will only sell to licensed shop, estimated at over 15,000 across the US in 2012.  As Justin put it “there is not test become a tattoo artist … but those working in a licensed shop will have to follow the rules.”

However, when I was talking to Justin Rodriguez, he guessed there were probably 5 times as many people doing tattoos around Bay City as there are artists employed in the several licensed shops in town.
Many people’s introduction to tattoos is through these amateur artists and they often produce a pretty good result.

There are, however, some real horror stories.  The main concern in obtaining a tattoo in an unregulated environment is infection.  Some of these can be simple skin infections that can be cleared up with ointment to skin borne staph infections to blood borne diseases like hepatitis and HIV.

An indirect result of all this growth is a growing market for tattoo removal.  Google “bad tattoos” and you will see exactly why.  (Hey, it’s all still money that circulates in the economy and they provide us with a good laugh at the same time.)

Great care should be taken in choosing a tattoo artist.  Imperfect removal techniques and cover-ups aside, a tattoo is permanent.  A shoddy artist can leave you with an everlasting reminder of a decision gone wrong.

I know your friend is a badass.  The problem is he just might be a threat to give you an ugly tattoo or something much worse.

“My Parents Hate It”

“My parents hate it,” laughed Chelsey as I asked about family’s reaction to Danjer Kat.  “Actually they are very supportive, but my dad has always been about being professional.  He is worried about that they will affect my ability to get a job.”

This is another very interesting societal trend with respect to the acceptance tattoo.  Industry research shows that 61% of all businesses would hire an employee with visible tattoos (though approximately 2/3 of those might require that they be covered in some instances).  This is up from very near zero 20 years ago.

And, though I would never try to get in the middle of advice between a Daddy and his daughter, Chelsey is well on her way to making Danjer Kat her job.   As he said, “It’s not a hobby anymore.”

While Chelsey would be open to signing with one of the many credible modeling agencies specializing in this market, for now she prefers to freelance.  “You lose a lot of control when you sign and a lot of agencies are not as good as they claim.”

Her work has taken her around the state and, recently, to a series of shoots in Chicago.  “I get to meet so many great people.  People who do great things.  It’s inspiring.”

And for someone who is just beginning to establish a reputation, Chelsey is also taking time to motivate others.  “I have a few girls I am helping, showing then what I am doing with Danjer Kat.  It’s about doing something you are passionate about.”

And that would be the perfect point to end pretty much any article, so that is what I am going to do. (While I go plan my next tattoo.)

U2: The Digital Dome Experience

From Earth to the Universe

Art at the Market

Living with Design: The World of John Kaloustian

On Thin Ice: Therapy Through Photography

The World of Tomorrow is Here Today: Images of the 1939 World's Fair GM Pavilion