Up Close & Personal with DARIUS RUCKER 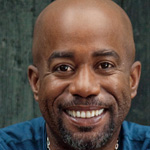 Darius Rucker's follow-up to his platinum 2008 album Learn To Live, debuted at the top of the country album charts on October 12, 2010. Produced by Frank Rogers, the release included his fastest rising single to date, Come Back Song, which spent a multiple week #1 on the Billboard Singles chart.

His current single, I Got Nothin', marks the third single off the gold album, Charleston, SC 1966, and is currently climbing the country charts. Additionally, Rucker was nominated for a 2011 Country Music Award Performance of the Year for his collaboration with Adele on the 2010 CMT Artists of the Year special.

Recently the second annual Darius & Friends benefit show in Nashville raised over $50,000 for St. Jude Children's Research Hospital in Memphis; plus Rucker recently joined Lionel Richie in the studio do record Suck on You for Richie's duet album due later this year.

Additionally, the 17th Annual Hootie & the Blowfish Monday After the Masters celebrity pro am golf tournament took place on April 11th of this year, with proceeds benefiting the children of South Carolina through education and supporting school music programs nationwide.

While he fronted one of the best-known pop-rock bands of the 199s, the South Carolina born singer took a serious about face into country music. The laidback singer-songwriter remains a friendly, easy-going musician, and is as affable as he was back when Hootie & the Blowfish released their debut album, Cracked Rear View in 1995, which took them to stardom.

“Things are different for me than it was back then,” Rucker explains. “I didn't have as many things to think about, but it's good. You get older, you get more responsibility and that's fine. You make changes when you get older.”

The biggest change Rucker made artistically was going into the Country genre headfirst. “The way I see it, our album Cracked Rear View could have been a country disc, but it worked out well as a pop-rock album. If you listen so some of the Hootie pop hits you can imagine the cuts with some rearrangement and instrumental changes, as country tunes.”

That discs, by the way, sold more than 16 million copies and remains one of the most popular albums of the last 16 years.

“It's hard to imagine what would have become of us if it weren't for that album,” Rucker says. “All I know is that I would still love country.”

The country music bug bit Rucker during the 1980s after he fell under the spell of Radney Foster, Dwight Yoakam and Lyle Lovett. “All of those guys are such great songwriters, I couldn't help but love what they did. I knew that I would make a country record someday.  I guess I write a certain way, which is true of most singer-songwriters. I do try to remain loyal to myself.”

“It's been great that things have gone so well for me. I'm singing songs in the style I love and fans are responding. I couldn't ask for anything more.” He also says that Hootie & the Blowfish remain an entity, but the group is on the backburner while Rucker establishes himself as a country singer.