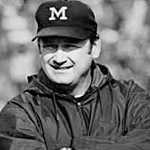 Now that the latest "game of the century" is in the books, all the memorials have been held, the special editions on television have been screened, let us for one last time consider the life of one Glenn E. "Bo" Schembechler.

I want to ask you to do something. It may be impossible to ask, especially if you're a University of Michigan football fan. But follow along for a moment, if you will.

Forget about 194 victories in 21 seasons in Ann Arbor, and that he finished 15 seasons in the top ten of the final Associated Press poll. Forget about 13 Big Ten football championships and 17 bowl game appearances.

Forget the unforgettable, those moments where Michigan football transcended everything else - beating Ohio State in 1969, John Wangler to Anthony Carter on the last play against Indiana, finally getting that Rose Bowl win in 1981.
Forget the players, the gridiron heroes - Leach and Lytle; McKenzie, Dierdorf, and all those offensive linemen; and the local boys - Slade, O'Neal, and others.

After all, it is only a game.

And the real reason we will miss Bo Schembechler most of all has little to do with what takes place on a hundred yards of grass on Saturdays in the fall.

Over the past few weeks, we've heard words like "character," "respect," "loyalty," "dedication" - so much so that if you open a dictionary and look up any of them, you may see Bo's face next to that particular entry. We'll miss Bo the most because we simply don't hear those words often enough anymore.

These days, and for much too long now, everyone and every thing seem to have a price. Yet Bo's most cherished traits, the things that you've heard about him over and over since his passing, cost absolutely nothing to possess, yet are more valuable than all the gold in Fort Knox. Those things that allowed Bo and his teams to win an average of nine games a season for 20 years can help us right here and right now.

Tom Ufer, son of legendary Michigan football broadcaster Bob Ufer said in an Ann Arbor News article last month, "My god, the time, the energy, the love he put into itŠthat, to me, is a true sign of a human being who succeeded."

In the same article, recently retired ABC announcer Keith Jackson said, ""I would like you to know Bo Schembechler epitomized integrity. That he tried very hard to do always what he said he would do, and if he couldn't, he would be the first to tell you. That was his basic strength. That was why he was easy to like. He valued values, and he lived by them."
Time, energy, love, and integrity - don't cost a dime, pay priceless dividends forever.

Instead, we see words "victim." "Excuse." "Alibi." Just before I sat down to write this, I read a Detroit Free Press story about a young lady who showed more intestinal fortitude than any player in any UM-OSU game, only to lose her battle with cancer. She was seven years old.

When something goes wrong in our society, it is always someone else's fault. Late for work? That darn traffic. Don't spend time with your children? I was hangin' out with my friends. Rob, steal, or shoot? I'm a product of my environment.

Yes, our area is filled with people who can't be helped, who don't want to be helped. All we can do is say a prayer for them. And then, we can look into the mirror. Young or old, white, black, brown, yellow, penniless or prosperous, we can be Bo Schembechler. We can give time, provide energy. We can love ourselves and those around us. We can live every moment of every day with integrity.

You don't have to be a Michigan fan to do it. You don't even have to like football. All you have to do is care - about life, the most important game of all.

Bo is watching you. And you know what he gets like when he's pissed off.