Titans' senior Matthew Pike scored the only shootout goal to break a 5-5 tie... 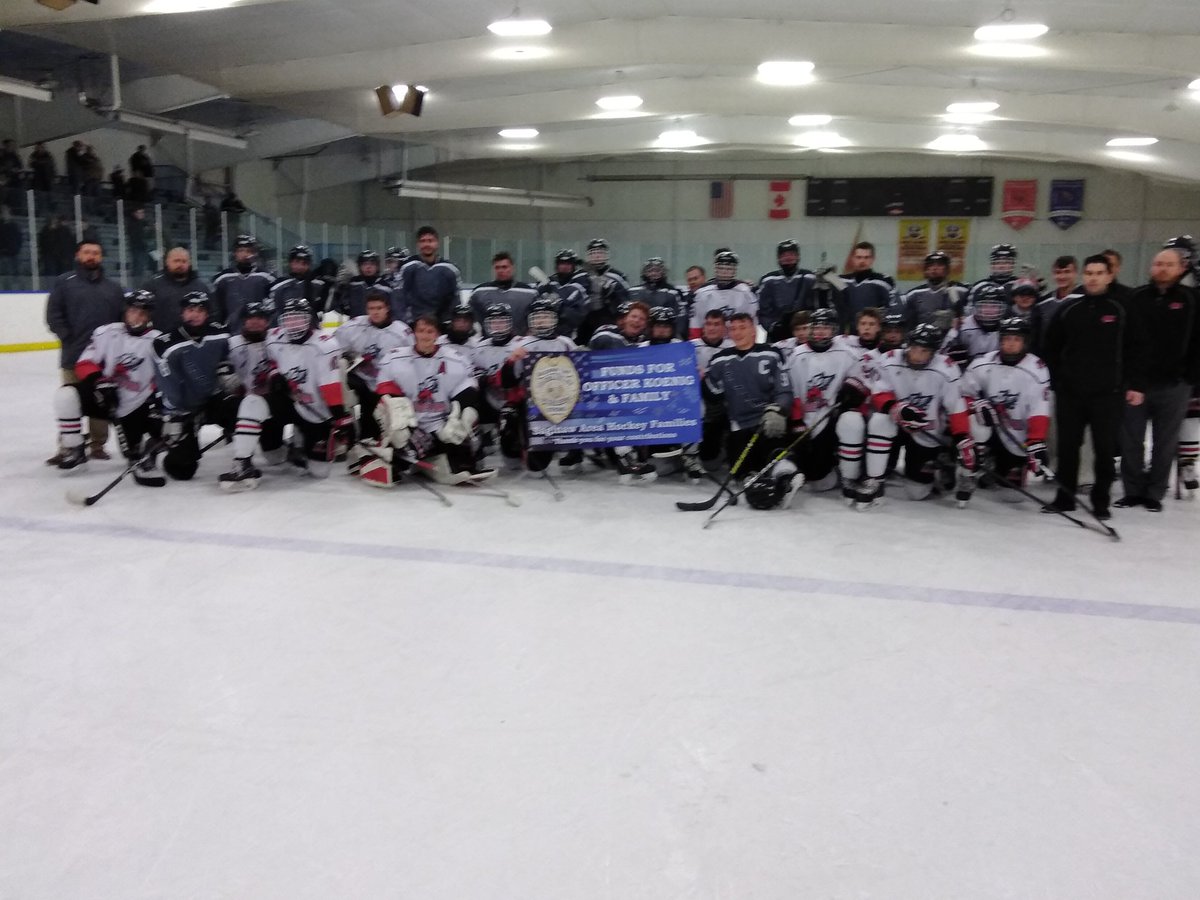 Saginaw, MI:
Tri Valley Titans senior Matthew Pike scored the only shootout goal to break a 5-5 tie and give his team a thrilling 6-5 shootout victory over the FNV Griffins at Saginaw Bay Ice Arena tonight, however, the two rivals managed to work together raising money for the family of Saginaw Township Police officer Jeff Koenig, who was shot while responding to a traffic stop Tuesday morning and is currently recovering at the University of Michigan hospital in Ann Arbor.
While he was admittedly upset that his team had just dropped a big game to a top rival, FNV head coach Ron Miller put things into perspective, noting how the beauty of sports can bring two heated rivals together for a common cause.
“This just show's why sport's are the greatest thing in the world,” Miller said. “We have a stage to say something here and in a game between two rivals, the game is secondary. Our primary goal was making sure the Koenig family is taken care of. Some of us may take for granted what we have, because of people like officer Koenig, and I couldn't thank our service men and women any more right now.”
The two teams sold 50/50 tickets at the game, collecting $1,099 dollars, which will be delivered in person to the Saginaw Township Police Department by Miller, captains from the two teams, and Titans' head coach Chris Tibaudo on Thursday morning.
“Tomorrow we will collect the 50/50 proceeds after practice and get together with our captains along with coach Tibaudo,” Miller added. “You know, this was a group effort with Tri Valley, so we're all gonna go over and personally hand the money over to the Saginaw Township Police Department. We want to thank everyone who came out and donated, it just show's what a great community Saginaw is.”
FNV jumped out to an early lead when sophomore Brendan Maly scored on a pass from senior Adam Rivette for a 1-0 Griffins lead just :38 seconds into the game, while Maly returned the favor midway through the first frame, setting up Rivette this time, who scored to give the Griffins a 2-0 lead at 6:37 of the first period, with an additional assist coming from senior defenseman Jack Ruppel.
The Griffins appeared to have been carrying the early momentum into the second when senior John Paul LeFevre's relentless fore-check work paid off after winning a battle for the puck behind the Tri Valley net then finishing with an unassisted goal for a 3-0 FNV lead just :52 seconds into the second period, but the Titans would respond a few minutes later when Pike scored on a wrist shot from the slot with assists coming from TVT junior Ethan Dorr and senior Colt VanWormer to cut the FNV lead to 3-1 at 3:13 of the second period.
The Titans increasingly picked up the pressure throughout the middle frame, out-shooting FNV by an 18-5 margin and getting to within a goal of the Griffins when TVT junior Jackson Kocur lit the lamp with an assist from senior Jacob Jeter to cut the FNV lead to 3-2 at 5:56 of the second period, before consecutive FNV penalties (2-min for hooking at 7:12, and 5-min for boarding at 9:46) led to the Titans having nearly seven straight minutes with a man-advantage.
With just over 2-minutes left in the Griffins' five minute boarding penalty, Tri Valley evened things up when Dorr scored a power play goal with an assist from Kocur to knot the game at 3-goals apiece with just under five minutes left in the second period, before Kocur (14:15 mark) and Pike (15:46 mark) followed with back to back goals for a 5-3 Tri Valley lead heading into the second intermission.
For the third straight period the Griffins scored in the opening minute when LeFevre lit the lamp with his second tally of the night with assists coming from Rivette and Ruppel to cut the Titans' lead to 5-4 just :19 seconds into the third, before FNV would take advantage of a Tri Valley penalty midway through the final frame when Maly scored the power play goal for his second tally of the night with an assist from Rivette to tie the game at 5-goals apiece at 11:39 of the final frame, eventually forcing the shootout per conference rules.
Tri Valley was led by Pike, who scored the game winning shootout goal, along with another 2-goals, followed by Kocur with 3-points (2-goals, 1-assist) and Dorr with 2-points (1-goal, 1-assist) along with Jeter and Van Wormer, who each finished with 1-assist apiece respectively, while TVT senior goal tender Chase Mendoza stopped 29 of the 34 shots he saw in between the pipes for the Titans.
Rivette led the Griffins with 4-points (1-goal, 3-assists) followed by Maly, who had 3-points (2-goals, 1-assist) LeFevre with 2-goals, and Ruppel, who finished with 2-assists, while FNV senior goal tender Brendan Schrems turned away 27 of the 33 shots he would face in net tonight.
The two teams will deliver the money which was raised tonight, along with a commemorative banner, to the STPD tomorrow morning.
“One thing I've always said and (something) I'll stick to, is that hockey families have always been the best,” Miller concluded. “Tonight, two teams were able to put aside their differences and a big rivalry for the betterment of our police officers.“
Click here to donate to officer Koenig's fundraiser:
Vdieo of pre game ceremony between FNV and TVT Wednesday night at Saginaw Bay Ice Arena: