Tri-City Sound Survey; Inside & Outside Insights for Your Ears 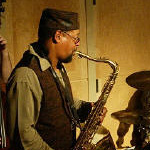 `The Review is trying a new column where we take an all-around look at the scene, both local and national and see what's new and/or changing under the radar. Open to all genres, you might find a new local release, bits of shimmering under-the-surface music info, a review, and or fresh quotes. We hope you enjoy this new outlook on the music scene. If you wish to add something for possible use in a future column like this, please contact the Review.

-----------------------------------
Dave Mason, former member of Traffic and one time member of a '90s incarnation of Fleetwood Mac (the Time album, remember that?) returned to Michigan for a show at The Ark in Ann Arbor on Nov. 16. Giving a full out electric performance at the predominantly acoustic house, Mason took a step into the future in over an hour and a half's worth of performance, while genuinely saluting his past for the sold out house.

Without missing a beat, Mason worked through classics such as Traffic's Dear Mr. Fantasy and 40,000 Headmen, while giving reminders of his great solo songwriting with You Shouldn't Have Took More Than You Gave, Only You Know And I Know, and World In Changes.

Even more incredible than the highlighted hits was his inspired guitar playing with an incredible band made up of Alvino Bennett on drums, Alex Drizos on bass/vocals, John Sambataro on guitar/vocals, and Bill Mason on keyboards.

Together they took four new Dave Mason originals and made them worthy of his former work. Trying out new material isn't something many legends do anymore, and Mason let it be known he still has something to say, including one which was a tribute to his late band mate in Traffic, Jim Capaldi.

All Along The Watchtower and the closing Feelin’ Alright ("My thanks for the memories", he said) brought the crowd to standing ovations.

---------------------------------
In the local scheme of things, Our Space In Time - a newer local underground favorite that classifies their exceptional musicianship as indie/ambient/experimental on Myspace will have their first official record release party on Saturday, December 9, at 6 p.m., held at the Red Eye at 205 N. Hamilton St., in Saginaw.

Having previously released only a couple of demos, In Waves will be distributed by Hidden Feast (label) out of Grand Rapids. The textural sounds are made up of seven members who have recently been diminished to five. In Waves delivers seven tracks full of pristine, winding instrumentation, with distant, sometimes haunting vocals. And it grows more with each listen.

The CD will be available for $7 at the show and the show is $5 to enter. "This CD release is going to be a great time," said bassist Brent James. "It's a big accomplishment. We have worked on the CD for about a year and it's good to see it finally finished. I hope everyone will enjoy."   Two acts will open for Our Space In Time, both M. Sord and For Wishes.
www.myspace.com/ourspaceintime is their home on the web.

------------------------------------------
Larry McCray is having his new studio album going through the final mix as we go to press. Look for an early release date next year from the local blues legend.  As an aside, Larry was invited to perform at the upcoming wedding of Dan Aykroyd's daughter in the Hamptons in mid-December. Seems the legendary 'Blues Brother' infused his offspring with good taste in music.

www.larrymccrayband.com is the new website. Meanwhile, The Saginaw Bay Area Blues Society is busy booking their Cabin Fever Blues Festival for the spring of 2007. It will be announced soon.

Seal's Americana blend of music, along with her stellar band (including the brilliant addition of songwriter extraordinaire John Latini on bass/pedal steel/vocals) pulled out all the stops on Saturday the 18th. The group also got away with using some electric instruments (quietly though!) in the all acoustic venue. Look for her to begin work on a new album as well in the coming year.
---------------------------------------------
The Avery Set is moving forward without the help of lead guitarist/bassist Brant Klein. Upon his return from Europe for a two month visit, lead vocalist/guitarist Chris Zehnder set the record straight on the band (and lack thereof this fall) in his new Myspace blog last week.

Fans of the group and the original music they have moved on to produce over the past two years need-not be disappointed, as he pledges to move into the new year with some new songs as they look for a collaborative effort.


------------------------------------
Acoustic/ambient jazz realists the Northwoods Improvisers out of Mt. Pleasant have released a new album. Infa'a is another journey into the depths of acoustic and sonic exploration and improvisation, while attaining listenability without losing the untrained listener. Once again headed off by legendary Detroit saxophonist Faruq Z. Bey, along with Mike Carey on various saxes/kalimba/flute, and Skeeter Shelton on saxes, the Improvisers have been getting rave reviews in Europe for the new release.

Limited to 100 CD’s (with two bonus tracks not found on the vinyl version), the core Improvisers-- bassist Mike Johnston, vibraphonist Mike Gilmore, and drummer Nick Ashton have turned in another inspired jazz performance.
A new DVD is due in the next year from the group as well.

-----------------------------------------
The return of the singer/songwriter has been quite apparent lately. With the resurgence of Bob Dylan, John Prine and Bob Seger (who managed to eclipse radio airwaves with FM actually playing new music by an older artist - wow, what a concept!), the year has been a seminal return to the pen and paper by some spectacular new artists.

One such artist is Grayson Capps, whose album Wail & Ride (Hyena) comes across like Johnny Cash meeting acoustic Black Crowes. Verbal, analytical, and a true listen in every sense of the word, Capps is not to be missed.

Stoll Vaughan is another troubadour songwriter just under the airwaves this year. His new CD Love Like A Mule (Shadowdog Records) picks up where the '70s left off and speaks in modern terms with an old heart. He was on tour opening solo-acoustic on the sold-out Def Leppard/Journey tour all summer. Figure that one out!

Pink Nasty's new Mold The Gold is raved everywhere from Rolling Stone to Harp Magazine and all places in between. She delivers in the sweet-vocal department, along the lines of a Neko Case or Shaun Colvin, but with a twisted wit, true shoot-from-the-hip stories, and she's not afraid to get real.

The Hell's Half Mile Film & Music Festival in Bay City is already gearing up for a second year. A fundraiser for the event will be held on January 4, 5, 6, & 7, 2007, at the State Theatre in Bay City.

Each day the new IFC Feature Film Unknown will be premiering for screenwriter Matthew Waynee, also of Bay City. He will be on hand each night after the viewing for Q & A sessions with the audience. The film stars Greg Kinnear, James Caviezal, & Bridget Moynahan.