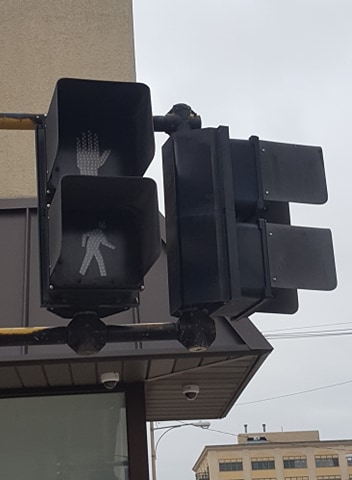 * Story update:  Since this was published, the City has now blocked the first two parking spots on the North and South ends of each block on Washington to  "improve sight lines" for those exiting the cross streets.  This includes the Handicapped spaces in the vicinity."

At this time of year, it is not unusual for there to be some discussion of the lights downtown. This year, however, the topic is not necessarily about the holiday colors that decorate the lamp posts and store fronts in Washington Street District.

Instead, much of the discussion between business owners and those who frequent downtown has to do with a change to the traffic signaling scheme along Washington Avenue.

As part of a larger City plan for traffic flow and control, the traffic lights between 3rd Street and 6th Street on Washington have been switched to flashing yellow caution signals at each intersection, with flashing red stop lights and signs at the corners of the cross streets. In this same move, the signals for pedestrian crosswalks at each corner have been disabled and are now dark.

Though this change has been in the works for some time, it is fair to say that it caught many in the community by surprise and it has proven controversial in the first week after the change was made.

In an effort to help add some clarity to the situation, we spoke to City Manager Dana Muscott on the issue. Following are her responses on behalf of the City,

Review Magazine: It's our understanding the project that resulted in changing the Washington Ave traffic light scheme has been in the works for some time.  Can you explain some of the history behind plans for Downtown traffic and the impetus behind these changes.  Who was asking for this?

Dana Muscott: This change dates back to 2012 when a signal study was done for all signals in the City of Bay City. The data showed none of the signals in Downtown Bay City met any of the warrants for a signal (*see below). In fact, when a signal is not warranted, the risk of crashes is higher.

Two-and four-way stops are considered safer. Using the aforementioned data, in 2015 the City changed the signal at Washington Avenue and Center Avenue to a four-way stop. The intent was that the intersection would be the pilot for a year, and if it went as expected, the rest of the Downtown signals would be replaced moving forward. We watched that intersection for a few years, and it works well. Now, we are moving forward with the rest.

DM: At the time ROWE was acting as the City Engineer. We now have an engineer on-staff.

Our engineer said the current traffic signals in Downtown Bay City are outdated and in need of some very expensive repairs. The City of Bay City is not able to obtain federal grant funding to replace signal equipment if it is not warranted (*see below).

When considering the expected effectiveness of the two-and four-way stops, as well as financial considerations, we expect this to be the best solution possible. Just as we watched the Washington Avenue and Center Avenue intersection, we will closely watch the recently changed intersections as well.

Review: Most of the concern stems from the switch to yellow caution lights through the six block Washington Street shopping district.  For many, the change seems to have come as a surprise. Can you describe the process that was used to secure the input and support of major stakeholders in the Downtown, such as business or building owners?

DM: As mentioned previously, the recommendation to make the changes was based on traffic data.

The original study was completed in 2012 with the first noticeable change (Washington and Center) made in 2015 – before being made permanent in 2016. This is not a situation where public input is required.

Most recently this change was discussed at our Nov. 2, 2020 City Commission meeting. Here is the link to the agenda, you can also view the recording on our website. https://baycitymi.civicclerk.com/Web/GenFile.aspx?ar=693.

Once City Commissioners voted to approve the change, we also utilized our website notification system (you can sign up for alerts at www.BayCityMI.org), Bay City Government and Bay City Department of Public Works Facebook pages to educate community members.

Review: Are the yellow caution lights a temporary, interim step in the project?  There has been some indication that the plan is to turn the caution lights into four way stops once the proper State approvals are in place.

DM: The recent changes made along Washington Avenue and connecting streets will eventually become permanent. The intersections will have a set up like you see at Washington Avenue and Center Avenue (stop signs and a flashing beacon in the middle). Please note the streets impacted by this Traffic Control Order are City owned and do not require approval from the State of Michigan.

*The Michigan Manual of Uniform Traffic Control Devices (MMUTCD) defines nine (9) warrants to determine if a signal should be used.  If at least one warrant is not met, a signalized intersection would likely be more detrimental than a non-signalized intersection. None of the warrants were met for the signal locations in Downtown Bay City.

The Engineering Division is monitoring the situation. It will take time for traffic patterns to re-adjust, but we will compile comments, complaints and suggestions and investigate them over the next year.

The following are the warrants described in the MMUTCD:

Review: The lead times on infrastructure projects, including changes to traffic signaling, are quite long.  This may be one of several reasons that people in the community were caught unaware when the change was made and a reason why opportunities for public comment were underutilized, or not used at all.

In a situation such as this, are there mechanisms for citizens or the City to deal with decisions that prove unpopular or even to correct an unintended consequence when a plan is executed? Is there a plan to revisit this issue at the next City Commission meeting?  Is it possible at this point to reverse or revise the plan in the near term, given the rules governing the process?