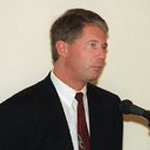 The Board’s September budget vote isn’t old news. The Democratic majority, along with Republicans Ann Doyle and Jim Graham preserved 51 jobs – including 15 sheriff’s deputies – by tapping $6.6 million in reserve funds, including the final $2.3 from the rainy day account, the equivalent of a family spending all of its savings.

At the same time, the Democrats rejected a proposal to cut their own pay and benefits by 10 percent.

This means a millage request, probably in the range of 1 mill to 1.5 mills, is likely to go to voters next spring. A likely date is May 3.

With the budget vote, County Republican Chairman Tim Kelly immediately found a campaign flag for the Nov. 2 elections, in which 10 of the 15 board seats are up for grabs.

“Saginaw County voters have a clear choice, to support fiscal responsibility and personal integrity as demonstrated by Republican county commissioners, or business as usual with Democrats ducking responsibility and leaving their own pay and benefits intact,” said Kelly, who is among the GOP stable of candidates.

“After more than thirty years of Democrat control Saginaw County Republicans agree it’s time for new leadership and a new approach to tackling the problems that have produced a $7 million deficit. Saginaw County Republicans believe a return to conservative principles of limited government and fiscal restraint will reverse an unsustainable course established by the boom and bust policies of the past.”

Kelly described Democrats as “cowardly” on the budget vote.

Garnet Lewis, County Democratic chairwoman, responds that Democrats made realistic and courageous choices. They realized they would face anti-tax attacks from Republicans, but they felt it was more important to protect public safety staffing, she said.

“Democrats are willing to make tough decisions to ensure that people have jobs. There was talk about laying off a lot of personnel in the sheriff’s office,” Lewis says. “This way (with a tax vote next spring) people will have a say-so. That’s how democracy should work. Let the process follow through.”

As for commissioner compensation, which ranges from $13,527 to $38,176  per member for what is viewed as part-time service, Lewis notes that pay is comparable to other counties.

“Republicans always seem to bring this up at election time. It doesn’t surprise me,” she says. “I believe the commissioners work for what they earn. I think of the amount of time my phone rings (as Democratic Party chairwoman) and I can just imagine what it’s like for them. The pay question is a matter of petty party politics. We always want other people to work for less.”

The 10 contested races that Kelly and the GOP are targeting include:

County Sheriff Bill Federspiel and Prosecutor Mike Thomas, both Democrats, joined several judges in supporting the budget spenddown plan to preserve jobs. Neither is up for election this year, as both are in the middle of their four-year terms.

Thomas notes that while the FIA’s Uniform Crime Reports continue to cast Saginaw as the nation’s most violent city, this year’s countywide murder count of four (through Oct. 17) is “lower than at any time in the past 40 years” and that gun crimes in the city are down 60 percent since 2005.

He says cuts in public safety would break the momentum that has been established, and as an example he notes that Flint cutbacks have been followed by more than 50 homicides so far this year.

Cheryl Hadsall, the past board chairwoman, said several Democrats met with Federspiel, Thomas and the judges early this summer to explore other alternatives, such as closing a portion of the county jail. Basically, they were stumped for ideas.

“I agree (with Garnet Lewis) that we are letting the people decide. I have yet to have a constituent tell me that we made the wrong decision.”

The rainy day fund was $5 million in 2000 when economic recession took hold. Republicans supported past decisions for a spenddown to the current $2.3 million, but they wanted to put on the brakes this time around. The plan also takes money from payroll reserves (which may force the county to borrow and incur interest costs to meet payroll), from jail reimbursement, and from health care for county retirees.

County Controller Marc McGill, a nonpartisan appointee of the board, had recommended the cutbacks.

“We've decided essentially to not live within our means by over $5 million this year; and also at the same time create a new expense for the taxpayers (interest expense),” McGill said.

Pat Wurtzel offered a series of amendments to reduce commissioners’ pay and to cut travel expenses. Democrats, with the exception of McColgan, rejected the proposals. The amendments would have erased only a fraction of the budget deficit, but Republicans said the measures would have made a symbolic dent and sent a message to the public.

Dems have said Wurtzel is grandstanding.

After supporting Wurtzel’s amendments, Jim Graham and Ann Doyle voted with the Dems for the full budget, saying their constituents would not tolerate reductions in sheriff’s deputies. However, Kelly said he would not include Graham and Doyle in his “cowardly” description.

“At least they first supported the amendments to try to cut the budget in other ways,” Kelly said. “They didn’t vote the way I personally would have voted, but I understand the decisions they made.”