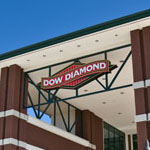 Who am I?
I gained 10,000 rushing yards in 91 National Football League games, faster than any other player.

Golfer Gary Player on superstitions, "If a golfer gets superstitious, he'll only go one way  - down. Some players may wear the same shirt for four straight days. No wonder they don't attract much of a gallery."

Former Major Leaguer Stan Papi, after getting three hits in a game, "I've never had a crowd in the big leagues every clap for me before. On opening day when I was with Boston, I got a standing boo."

Abe Lemons, former Oklahoma City basketball coach, offering a solution to recruiting excesses, "Just give every coach the same amount of money and tell him he can keep what's left over."

Creighton University's Pat Venditte is the only ambidextrous pitcher in college baseball. The 21-year-old right-hander throws up to 91 miles-per-hour. As a left-hander, he has a "whip-like sidearm delivery and a biting slider," according to sports writer Alan Schwarz of The New York Times. Venditte is naturally right-handed, but began throwing with either hand when he was only three-years-old. He was encouraged by his father, Pat Sr., himself a former college ball player. An honor student as well as a star athlete, he turned down an offer from the New York Yankees, preferring to finish his education at the Jesuit University where he is now in his senior year.

Hats off to Saginaw High School's Mighty Marching Trojans who will perform during the AllState Sugar Bowl pre-game festivities and halftime show on New Year's Day. The game will be played at the Louisiana Superdome in New Orleans. A member of the Bowl Championship Series, the Sugar Bowl is tied for the second-oldest bowl game in the nation after the Rose Bowl. Jeannine "J.C." Coughlin is the school's band director.

Detroit Tiger second baseman Placido Polanco's errorless streak is still intact at 181 consecutive games. It's already a record for a Major League second baseman, but once next season begins he'll be closing in on Steve Garvey's record for infielders. The former Dodgers and Padres first sacker went 193 games without an error while in San Diego from 1983-85.

Been to a football game at Bangor John Glenn High School lately? The school's booster club constructed private boxes at its football stadium and has made them into private boxes, which fans can rent. The suites, once a temporary press box, were built in 2003. The boxes have plywood floors and feature windows that can be opened. The boosters plan to bring in some comfy chairs and portable heater if needed. Three to four boxes are available for each game but no alcohol is allowed. Prices include admission, drinks, hot dogs or pizza, and popcorn. The only problem? They are located on the visitor's side of the field.

The Atherton School District in Flint has privatized its coaching services becoming the first district in the area to do so. While schools have privatized janitorial and cafeteria services for years, Atherton's move has caused a slight stir in the school district. Administrators say it's a cost-cutting move. Athletic Director Ralph LaDuke said that nothing really changes for the coaches except they get their stipend from Portland-Mi -based PCMI West. Coaches will see a slight increase in pay because they don't have to contribute to the state retirement system. The unions, of course, do not like the move saying it doesn't serve students well.
*

Whatever happened to Bob Essensa?