The Underappreciated Satirical Brilliance of National Lampoon\'s Pledge This 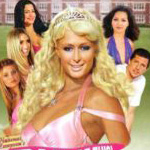 Their conversation took place before Ms. Hilton's incarceration. Mr. Ebert is currently recovering from surgery so he communicated by handwritten notes, hand gestures, and mental telepathy.

Review: Most of our readers, and I'm sure most of your readers at Chicago Sun-Times, will be surprised to learn that you have championed National Lampoon's Pledge This as the finest ensemble comedy of the year. I myself have steered clear of any movie bearing the National Lampoon brand after Christmas Vacation.

Ebert: And that's understandable. Former Lampoon publisher Matty Simmons sold the rights to the Lampoon name to some sleazeballs out in California sometime in the 90's.

Review: As a major fan of the Lampoon in the 70's it's been painful to watch the endless parade of wretched refuse that is churned out direct to DVD. They really manage to trash a valuable brand.

Ebert: Which is why I was completely blindsided by Pledge This. I went in expecting a waste of ninety minutes. Another T & A comedy about drunken frat boys and sorority girls in the shower. How wrong I was.

Review: After reading your rave review I had to see for myself. I don't think I've been so stunned since I saw Airplane for the first time. Who would have thought that Paris Hilton had such perfect comedic timing and a talent for improvisation?

Ebert: This stupid spoiled whore persona, and it is of course a persona, just as much as Charlie Chaplain's Tramp was a persona, has been developed over years. You saw a similar genius at work with Sasha Baron Cohen's creation Borat. Unfortunately most people don't understand that it's an act.

Review: Exactly. If you check out her bio on Wikipedia you'll find that Paris was home schooled by a series of Pulitzer Prize winning academics, hired by her parents, and graduated from Oxford before embarking on a career in entertainment. She and Danica McKellar, who played Winnie on The Wonder Years, presented a paper on String Theory recently at Harvard's Emil Faber School of Science.

Ebert: The character she plays in Pledge This is Victoria English.

Review: Now many reviewers slammed the film, if they reviewed it at all, saying she just played herself, as a stupid, spoiled whore.

Review: Now doing a movie under the National Lampoon brand invited the inevitable comparison with National Lampoon's Animal House. In this case, rather than the writers working from Chris Miller's experiences at Dartmouth and Doug Kenney and Harold Ramis' college experiences at Harvard and Washington University, writers Cheryl Guerriero, Connie Lingus and Anita Hanchob used their sorority adventures.

Ebert: When Belushi played Bluto in Animal House, he had years of experience performing at Chicago's Second City, in the stage shows Lemmings and The National Lampoon Show, and at Saturday Night Live. But Paris' pitch perfect ear for dialects and her charisma just light up the screen. Many of us thought that Gilda Radner was the new Lucille Ball. Paris has that kind of comic brilliance. It was a crime that she wasn't nominated for an Oscar, but the Academy rarely acknowledges comedy.

Review: Some have felt that the additional nude scenes were gratuitous and exploitative.

Ebert: Was it gratuitous and exploitative when Belushi climbs the ladder to peer into the window of the Tri-Delt sorority where he discovers the sister's pillow fighting in their vintage era bras and panties and girdles? Yes, of course. That's missing the point.

Ebert: Yes, it's almost Fellini-esque in the carnival-like atmosphere. When Paris makes her entrance as Victoria English, it's as stunning an entrance as when Liz Taylor arrives in Rome in "Cleopatra".


Review: I was surprised at the sub-plot involving date rape. When Paris' character forces the boyfriend of a rival sorority girl to have sex with her, videotaping the escapade, it's both a wink and a nod to her infamous sex tape scandal and also a biting social commentary on feminine competition and rivalry.

Review: Were you familiar with Paris' earlier work?

Ebert: Like most people, I first saw her on Simple Life where she and Nicole Richie displayed a Martin and Lewis sort of teamwork. Then the infamous One Night In Paris video came out and I wasn't the only one who thought it evoked Yoko Ono's performance art, as well as that of Andy Warhol. The audience thinks they're laughing at her. But she's laughing at them.

Review: All the way to the bank.

Review: And the critical uproar over the final showdown between the Gamma Gammas and the girls of Tri Delta in the oil wrestling match at the strip club.

Ebert: Which is an homage to the oil-wrestling scene in All The Marbles, while also making a political statement about oil prices, females owning their sexuality, and the Gulf War all at once.

Review: Mr. Ebert, thank you for taking the time to talk with us.

Ebert: It was almost a pleasure.