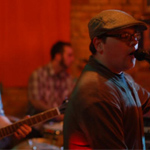 As a relative newcomer to the Rockabilly scene The Triple Aces have hit the ground running, gigging up and down Mid-Michigan from Bemo’s to the Machine Shop along with stops @ the Hamilton Street Pub, White’s Bar, Woody O' Brien's and Flanagan's. These cats have paid attention to Carl Perkins, Johnny Cash, Charlie Feathers, Don Rich and all those pioneers that developed the original rhythms that inspired rock & roll music The public seems to agree as The Triple Aces have won several Review awards including Rock Band Deserving Wider Recognition, Rookies of the Year and best drummer - Nick Starr
They had this to say about their recent accolades:
You got Rookie of the Year...How long have you been together? How did you find each other?
Josh Corrion: Rayce and I met at a show in December of '08, and we had mutual taste in music, so we started jamming a bit. Around May of '09 we decided to find a drummer and start a band, so we put up a flier at Guitar Center. I didn't even think it would really work but within a week we got a call from Nick, and after one practice we knew that he was a perfect match. Our first show was in June on a Monday at White's Bar. That's how it all started.
Rayce Ribble: We've been together about 9 months. We started in the summer with a basic idea of what we wanted to do, because we had no drummer. Josh and I would just hang out, drink beer, cook out, and jam. Then we found Nick. Come to find out, I met him long before he tried out for us. We all got along great.
The rhythm section is critical to rock music. The interplay between the bass and drums can make or break a song, especially with Rockabilly as it focuses so much on rhythm. How are you able to find and keep a groove going?
Josh: We actually have our own language onstage. We have our own motions for everything from a break in a song to the ending. We don't really use it much and more though because we play so many shows that we would just know what to do even if we were performing in separate rooms. We also sometimes just shout at each other over the music to communicate,
Rayce: I would say that Nick and I work well at finding a tempo for each song that fits. We like playing with each other.
Why did you decide on Rockabilly? Who inspired you?
Josh: When I was in my teens I got really big into punk rock, and a lot of punk bands are influenced heavily by rockabilly, and some even did covers from rockabilly artists - so it also stemmed from there. The Stray Cats for me, I always loved the Beach Boys, even as a young kid, so the love for old music was already there, and was also a big inspiration to me early on, because they were raw enough and appealed enough to catch my attention.
Rayce: When I was in high school, I got a chance to hang out at Whites Bar a lot to check out bands and see what I liked. I was already sitting in with bands. I would have to say that I was inspired to play the music thanks to Cash O' Riley and Dave Roof. Dave showed me the right way to slap an upright, and Cash gave me a chance to actually play, and so did Nobody's Business. Those two bands really helped me learn the ropes and I'm very lucky to have met such cool people.
Josh, you have a great jangly technique. How did you develop your guitar sound? Who inspired you?
Josh: First of all, thank you for the compliment. I would have to say I really started my technique playing along with Carl Wilson of the Beach Boys' solos. A lot of their earlier stuff was really simple pentatonic scale solos, and that scale is easy for anyone to grasp. It all came from that and other surf bands, as I was in an instrumental surf band a few years back. Rockabilly and surf rock's guitar styles are a lot different - surf is stiff and rarely improvised; rockabilly is loose and raw - so even with surf guitar mastered I still had a few things to learn when I got into rockabilly guitar playing. Chuck Berry was also a HUGE part of my guitar playing back then, as he was also a big influence on Carl and the rest of the Beach Boys. Carl Perkins is what I've been trying to emulate lately with my guitar playing though, he had so much soul for a white boy from Texas!
What are your future plans? Any Recordings? Original music?
Josh: In just a couple months we plan on going to a studio called The Loft in southern Michigan and working with Tim & Andy Patalan, who have worked with such acts as Taproot and Sponge, and make a full-length album. We also want to explore the states a little bit and get our name out there. As far as original music, we do currently have enough songs for that album I mentioned, but we usually play at least 3 hours each night we play, so right now we have a much larger catalog of covers, and that's probably the way it will be until we are able to break away from being a bar-band and move into playing higher end gigs. This is my perfect band, I don't want to play anything else with anyone else than these two boys, and I really want to take the music scene for all it's worth and make a name for ourselves. We're not looking to change the world or alter the course of popular music, we just want to do what we love to do and make it pay off.