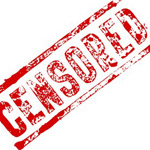 As stated last issue, every year a media watchdog group based at California's Sonoma state University entitled Project Censored sets out through the course of the year to discern the big stories that the mainstream media either ignores, black out, spikes, or under-reports.

In our previous edition we presented the Top Five Censored Stories of 2007 in the first installment and our pleased to conclude the Top Ten list with this final portion of the story.

Special Counsel Scott Bloch, appointed by President Bush in 2004, is overseeing the virtual elimination of federal whistleblower rights in the U.S. government.

The U.S. Office of Special Counsel  (OSC), the agency that is supposed to protect federal employees who blow the whistle on waste, fraud, and abuse is dismissing hundreds of cases while advancing almost none. According to the Annual Report for 2004 (which was not released until the end of first quarter fiscal year 2006) less than 1.5 percent of whistleblower claims were referred for investigation while more than 1000 reports were closed before they were even opened.

Only eight claims were found to be substantiated, and one of those included the theft of a desk, while another included attendance violations. Favorable outcomes have declined 24 percent overall, and this is all in the first year that the new special counsel, Scott Bloch, has been in office.

Bloch, who has received numerous complaints since he took office, defends his first thirteen months in office by pointing to a decline in backlogged cases. Public Employees for Environmental Responsibility (PEER) Executive Director Jeff Ruch says, ". Backlogs and delays are bad, but they are not as bad as simply dumping the cases altogether." According to figures released by Bloch in February of 2005 more than 470 claims of retaliation were dismissed, and not once had he affirmatively represented a whistleblower.

On March 3, 2005, OSC staff members joined by a coalition of whistleblower protection and civil rights organizations filed a complaint against Bloch. His own employees accused him of violating the very rules he is supposed to be enforcing.

This is the third probe into Bloch's operation in less than two years in office. Both the Government Accountability Office and a U.S. Senate subcommittee have ongoing investigations into mass dismissals of whistleblower cases, crony hires, and Bloch's targeting of gay employees for removal while refusing to investigate cases involving discrimination on the basis of sexual orientation.

# 7 US Operatives Torture Detainees to Death in Afghanistan and Iraq

The American Civil Liberties Union (ACLU) released documents of forty-four autopsies held in Afghanistan and Iraq October 25, 2005.  Twenty-one of those deaths were listed as homicides. The documents show that detainees died during and after interrogations by Navy SEALs, Military Intelligence, and Other Government Agency (OGA).

"These documents present irrefutable evidence that U.S. operatives tortured detainees to death during interrogation," said Amrit Singh, an attorney with the ACLU. "The public has a right to know who authorized the use of torture techniques and why these deaths have been covered up."

The Department of Defense released the autopsy reports in response to a Freedom of Information Act request filed by the ACLU, the Center for Constitutional Rights, and Physicians for Human Rights, Veterans for Common Sense, and Veterans for Peace.

Janis Karpinski, U.S. Brigadier General Commander of the 800th Military Police Brigade, was in charge of seventeen prison facilities in Iraq during the Abu Ghraib scandal in 2003. Karpinski testified January 21, 2006 in New York City at the International Commission of Inquiry on Crimes against Humanity Committed by the Bush administration. Karpinski stated: "General [Ricardo] Sanchez  [commander of coalition ground forces in Iraq] signed the eight-page memorandum authorizing a laundry list of harsh techniques in interrogations to include specific use of dogs and muzzled dogs with his specific permission."

Karpinski went on to claim that Major General Geoffrey Miller, who had been "specifically selected by the Secretary of Defense to go to Guantanamo Bay and run the interrogations operations," was dispatched to Iraq by the Bush administration to "work with the military intelligence personnel to teach them new and improved interrogation techniques." When asked how far up the chain of command responsibility for the torture orders for Abu Ghraib went, Karpinski said, "The Secretary of Defense would not have authorized without the approval of the Vice President."

The Department of Defense has been granted exemption from the Freedom of Information Act (FOIA). In December 2005, Congress passed the 2006 Defense Authorization Act which renders Defense Intelligence Agency (DIA) "operational files" fully immune to FOIA requests, the main mechanism by which watchdog groups, journalists and individuals can access federal documents.

Of particular concern to critics of the Defense Authorization Act is the DIA's new right to thwart access to files that may reveal human rights violations tied to ongoing "counterterrorism" efforts.
The rule could, for instance, frustrate the work of the American Civil Liberties Union (ACLU) and other organizations that have relied on FOIA to uncover more than 30,000 documents on the U.S. military's involvement in the torture and mistreatment of foreign detainees in Afghanistan, Guantanamo Bay, and Iraq-including the Abu Ghraib scandal.

The ACLU recently battled the FOIA exemption rule of the CIA in a lawsuit over the agency's attempt to withhold information concerning alleged abuse of Iraqi detainees. The CIA's defense centered on the invocation of FOIA exemption, and although a federal judge ultimately overrode the rule, Jaffer cited the case as evidence of "exemption creep"-the gradual stretching of the law to further shield federal agencies from public scrutiny.

Thomas Blanton, director of the National Security Archive, adds, "These exemptions create a black hole into which the bureaucracy can drive just about any kind of information it wants to. And you can bet that Guantï¿½namo, Abu Ghraib-style information is what DIA and others would want to hide."

The Newspaper Association of America reports that, due to lobbying efforts of the Sunshine in Government Initiative and other open government advocates, congressional negotiators imposed an unprecedented two-year "sunset" date on the Pentagon's FOIA exemption, ending in December 2007.

Despite the 2004 International Court of Justice (ICJ) decision that called for tearing down the Wall and compensating affected communities, construction of the Wall has accelerated. The route of the barrier runs deep into Palestinian territory, aiding the annexation of Israeli settlements and the breaking of Palestinian territorial continuity. The World Bank's vision of "economic development," however, evades any discussion of the Wall's illegality. The World Bank has meanwhile outlined the framework for a Palestinian Middle East Free Trade Area (MEFTA) policy in their most recent report on Palestine published in December of 2004, "Stagnation or Revival: Israeli Disengagement and Palestinian Economic Prospects."

Central to World Bank proposals are the construction of massive industrial zones to be financed by the World Bank and other donors and controlled by the Israeli Occupation. Built on Palestinian land around the Wall, these industrial zones are envisaged as forming the basis of export-orientated economic development. Palestinians imprisoned by the Wall and dispossessed of land can be put to work for low wages.

The post-Wall MEFTA vision includes complete control over Palestinian movement. The report proposes high-tech military gates and checkpoints along the Wall, through which Palestinians and exports can be conveniently transported and controlled. A supplemental "transfer system" of walled roads and tunnels will allow Palestinian workers to be funneled to their jobs, while being simultaneously denied access to their land. Sweatshops will be one of very few possibilities of earning a living for Palestinians confined to disparate ghettos throughout the West Bank.

There is widespread speculation that President Bush, confronted by diminishing approval ratings and dissent within his own party as well as within the military itself, will begin pulling American troops out of Iraq in 2006. A key element of the drawdown plans not mentioned in the President's public statements, or in mainstream media for that matter, is that the departing American troops will be replaced by American airpower.

"We're not planning to diminish the war," Seymour Hersh quotes Patrick Clawson, the deputy director of the Washington Institute, whose views often mirror those of Dick Cheney and Donald Rumsfeld. "We just want to change the mix of the forces doing the fighting-Iraqi infantry with American support and greater use of airpower."

While battle fatigue increases among U.S. troops, the prospect of using airpower as a substitute for American troops on the ground has caused great unease within the military. Air Force commanders, in particular, have deep-seated objections to the possibility that Iraqis will eventually be responsible for target selection. Harsh quotes a senior military planner now on assignment in the Pentagon, "Will the Iraqis call in air strikes in order to snuff rivals, or other warlords, or to snuff members of their own sect and blame someone else? Will some Iraqis  be targeting on behalf of al-Qaeda, or the insurgency, or the Iranians?"

Dahr Jamail reports that the statistics gleaned from U.S. Central Command Air Forces (CENTAF) indicate a massive rise in the number of U.S. air missions-996 sorties-in Iraq in the month of November 2005.

The size of this figure naturally begs the question, where are such missions being flown and what is their size and nature? It's important to note as well that "air war" does not simply mean U.S. Air Force.  Carrier-based Navy and Marine aircraft flew over 21,000 hours of missions and dropped over twenty-six tons of ordnance in Fallujah alone during the November 2004 siege of that city.

Visions of a frightful future in Iraq should not overshadow the devastation already caused by present levels of American air power loosed, in particular, on heavily populated urban areas of that country. The tactic of using massively powerful 500 and 1,000-pound bombs in urban areas to target small pockets of resistance fighters has, in fact, long been employed in Iraq. No intensification of the air war is necessary to make it commonplace. Jamail's article provides a broad overview of the air power arsenals being used against the people of Iraq.

Given the U.S.  Air power already being applied largely in Iraq's cities and towns, the prospect of increasing it is chilling indeed. As to how this might benefit the embattled Bush administration, Jamail quotes U.S.  Air Force Lieutenant Colonel Karen Kwiatkowski:

"Shifting the mechanism of the destruction of Iraq from soldiers and Marines to distant and safer air power would be successful in several ways. It would reduce the negative publicity value of maimed American soldiers and Marines would bring a portion of our troops home and give the Army a necessary operational break.  It would increase Air Force and Naval budgets, and line defense contractor pockets. By the time we figure out that it isn't working to make oil more secure or to allow Iraqis to rebuild a stable country, the Army will have recovered and can be redeployed in force."