The Thunderchickens * Straight from the Coop 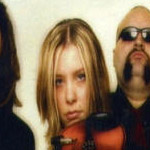 Technically, it was a scene often repeated: a local band releases a CD with a show at a local bar. Friends, family and fans flock in to show their support. I buy a disc (or score a freebie or trade a book for one), and proceed to drink too much for my own good.

But when the Thunderchickens took the stage at Indian Barry's in Bay City to celebrate the release of Straight from the Coop, it was immediately apparent that this night was going to be far from a typical show.

From the moment the music started, it occurred to me that one doesn't merely listen to or watch the Thunderchickens, one travels with them. They take you and you go - no questions. No hesitation. No doubts. You know that even though you have no idea where you're headed, it's exactly where you need to go.

It's a rare band that can achieve such textures, such depth and richness, with only a four-piece. If you close your eyes, you will swear that there must be 7 top-notch musicians, 3 stellar vocalists, the ghosts of Gang of Four, Velvet Underground, Nicolo Paganini, and X, as well as 96 whirling dervishes and a bottle of the finest scotch ever spilled - all up there in epic synchronicity.

And this is only the beginning.

The songs continue; pounding into you and changing not merely your opinions about music, but the way you hear music - the way you hear everything. That's the journey you are now on. They conjure up a sonic tidal wave. A surf breaking rocks (what surf-rock should have been). Jekel ravishes his guitar (think the grittier portrayals of "Leda and the Swan"), and Matt Kramer on drums and Justin McKinnon on bass carve cliffs and reefs riddled with the perches of screaming seabirds. Mel, in the center of it all, makes love to that ocean of sound and offers herself to the sea with no fear of drowning.

But it would be a mistake to write her off as merely a sexual force of energy - it is her words, her voice, her violin that make her a gifted artist who makes you willing to kill or die to be with her there on that stage.

And now, a week or so after that night, I haven't taken the disc out of my CD player. Every track grows richer and fuller with each listen.

These songs have something to say, and what they say will haunt you.