The Thunder Chickens: Variety is The Spice of Life 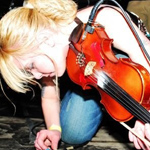 One group that needs little introduction is The Thunder Chickens. Consisting of the inimitable Melissa May on vocals, guitar & violin, Josh Jekel on guitar, Matt NyQuist on bass and Terry Poirer on drums, the group has secured numerous honors the last couple of years at the Review Music Awards, and this year reaffirmed their place in the hearts of tri-city fans by nailing honors for Best Female Rock Vocalist, Best Rock Instrumentalist (Melissa May); Best Bassist (Matt NyQuist) and Best Variety Band.
The Thunder Chickens have been keeping very busy lately with little time to slow down, spreading their wings down in Jacksonville, Florida and performing throughout the East Coast. They are currently preparing to perform in Myrtle Beach for Bike Week and are getting amped-up for their first television performance in North Carolina at the The NC Motor Speedway for the national TV show Fast Track to Fame.
“We were originally supposed to perform at Talladega Super Speedway in Alamabama on April 24th, but due to severe storms that weekend they had to evacuate the racetrack and reschedule the taping in North Caronlina on May 28th,” explains Melissa May.
“Our fingers are crossed that we win the $5,000 cash prize so we can finish our upcoming album and continue on the road. We recently recorded a new 6-track EP called Old Victrola at White Head recording studio in Saginaw, which was recently featured on Trisha Lewis’ radio program The Eclectic Chair. Fans can snag a copy online at www.thethunderchickens.com.
“Winning Best Variety Band is a huge honor for us. We strive and work really hard to perform a diverse blend of music for all types of audiences, which in total reflects our musical up-bringing. From Folk to Country to the Gargage/Classic Rock sound, we try to incorporate all sounds in our originals and hand-pick covers for everyone’s enjoyment.”
“I personally want to thank everyone who nominated and voted for me for Best Female Rock vocalist and instrumentalist and for Matt as Best Bassist. With all my heart, I thank everyone who voted. People have a misconception of performing in bands – that it is all sex, drugs and rock ‘n roll; which in some part is true, but there is a lot of behind-the-scenes that people don’t realize.”
“This business is a lot of hard work and rejection – going to bed hungry and sleeping in the van. There have been times where I have questioned what I am doing, but it is all worth it because of such strong support from our musical community back home. With that said, we have a lot of love for our Tri-Cities family and fans!”
“We would also like to congratulate all the new emerging artists in the area – The MELtones, Act as One, Triple Aces, and everyone influencing the tri-city scene.”
“The Thunder Chickens will be returning home June 12th to perform two free shows in one day. You can catch us early in the afternoon outside at the Tittabawassee Township Park for the Free Music Fest featuring lots of local artists; and later that night at Bemo’s Bar in Bay City, which was voted #1 Rock Club!”
“And don’t forget to check our updates on our website and Facebook page for the airing date for our first television performance on the SPEED channel!”