The Propagation of Fear, Isolation & Misery 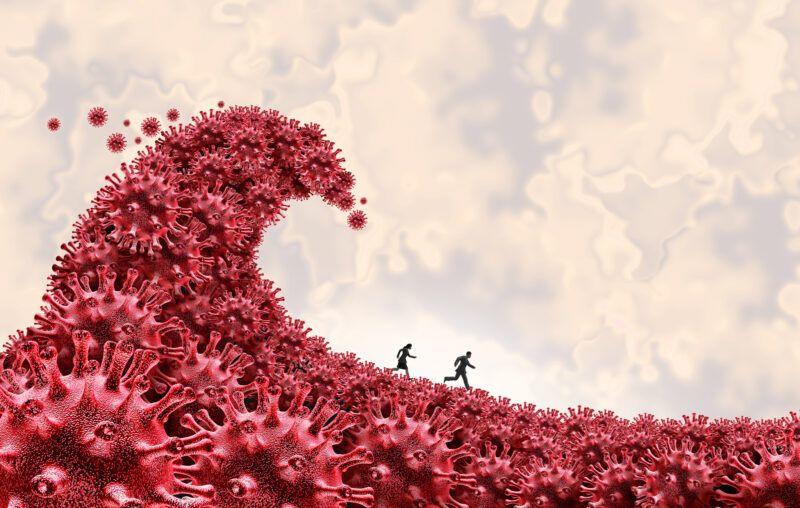 There are probably multiple reasons why coronavirus cases in the US are down nearly 50% in the US in the last month.

Could be seasonal. Could be the vaccine. Could be herd immunity from natural infection.  Could be the post-holiday default to endemicity. Could be a change in the cycle threshold of PCR that generates fewer positive cases. Could be data tweaks in light of political changes.   Anyone who says he knows for sure which is dominant is pretending to know the unknowable.

The New York Times, which obliquely reports the case decline, is still certain that you should still live in isolation, fear, and disease panic.

They offer every county in America a tool in which you can discover what you should do to protect yourself from the pathogen, as if the only way to deal with a respiratory virus is to hide. Their tool is extremely manipulative.

For example, they have this category called “very high risk level.” Red is in the text. Scary! But what is it? It means 11 or more people per 100,000 have generated a positive PCR test for the coronavirus.  Not deaths. Not hospitalizations. Not even symptomatically sick. (Yes, I know the term “sick” is old fashioned.)

We are talking about 11 positive PCR tests. This is an infection rate of 0.01%. Consider too that the NYT reports that these tests in the past have generated up to 90% false positives. In addition, the infection fatality ratio for those under 70 could be as low as 0.03%.

Once you add all that up, you end up with a very long string of zeros followed by some number (I’ll let someone else do the math; in any case, all these data are mostly based on illusion). In any case, we are talking about a vanishingly tiny chance of severe outcomes for the population at large, depending almost entirely on demographics.

Still, the Times says you may not live a normal life. True, people in Florida, Georgia, South Carolina, Texas, South Dakota, and many others states are living happy normal lives. But they are all doing it wrong, according to the New York Times.

Let’s look at their life advice for anyone living in a “very high risk” area.

No haircuts, no manicures, no gatherings, no travel, no friends, no bars, no restaurants, and no singing!   BE VERY AFRAID…CONSTANTLY!

To me, all of this sounds like insanity defined. And look at how they tip their ruling-class hand. People should not go to the store but rather have their groceries delivered. Delivered by whom? Apparently not readers of the New York Times.

To the Times, there is only us and them: the clean people vs. the dirty people who get to travel to deliver to “us” our groceries and essential services. Our job is to sit in a perpetual state of disease avoidance while they operate as sandbags to create the herd immunity from which we will benefit. It’s the new feudalism.

Now look what we must do for “extremely high risk” which pertains for as low as 20 PCR positives per 100,000 people.

Notice any difference between “serious” and “extreme” risk? That’s right. There is none. They are identical. And if you look at the map above you can see that right now most of the country is in extreme risk, according to the Times. According to this preposterous map, there are only two counties in the US at low risk.

Let’s look at Prairie County, Montana. It’s one of the two places you can live without the terrifying prospect of dropping dead from disease. There are 1,300 people living there. If one person tests positive, that immediately shifts the entire county into extreme risk. So the trajectory since November 1 looks utterly hilarious, toggling between low and extreme risk with a total of 70 cases in three months with most daily cases at exactly 0.

So what according to the Times should the good people of Prairie County do? They should be grateful to be relatively safe but try to their best to stay put! Do not go anywhere near the scary places elsewhere! They should stay in their bubble!

Look, at some point, the media is going to have to admit complicity in the creation of this extremely unscientific, pathological, unwarranted, and deeply destructive disease panic. They created it, starting with the now-discredited Donald McNeil’s February 27, 2020, recommendation that we “go medieval” with the coronavirus.

This whole paradigm amounts to a rejection of public health, which is always not just about one pathogen but all threats to human health and not just for the short term but the long term. The defining mark of 20th century public health as distinguished from the Middle Ages is that we recognized that pathogens are all around us and need to be managed rationally. Oh also the paradigm rejects human rights and freedom.

We do not need to destroy society, lock people in their homes, tear down businesses, close schools, traumatize kids, drive people to alcoholism and drug abuse, divide society between the clean ruling class and the dirty working class, ban travel, close churches, abolish choirs, close the arts, and whip up the population into a frenzied psychological meltdown in order to deal with a new strain of a respiratory virus.

But tell that to the New York Times.