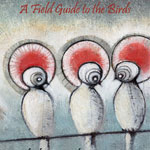 In his commentary on his poem "As for Poets," Pulitzer Prize winner Gary Snyder wrote about a renewable energy that comes from within: "The delight of being alive while knowing of impermanence and death, the acceptance and mastery of this."  The poet is to be simultaneously inside and outside the world as Snyder describes in his poem: "A Mind
Poet / stays in the house. / The house is empty / And it has no walls. / The poem / Is seen from all sides, / Everywhere, / At once."

In his first full length poetry collection, The Moon Cracks Open: A Field Guide to Birds & Other Poems, local poet Marc Beaudin takes on this task of the poet, delighting in being alive while knowing impermanence.

The book consists of 49 poems organized into two sections.  Though the book is divided in this way-the first sections seemingly the "other" poems from the book's title, the second half the field guide-overall the poems are connected thematically and stylistically.  Common themes and areas of exploration involve relationships, lost love, politics, nature, life in general, and occasionally just the simple act of writing. as in the poem "Writing at Grizfork Studio (Pica Pica)":

On a good day,
I come close.

Each poem in the collection ends with a location signature-perhaps the setting of the poem, the place that inspired the poem, or maybe simply where the poem was composed.  Though there are poems set in other locales, the majority of places are recognizable by name to your average Michigander--Manistique, Mackinaw Island, Bay City, Keweenaw
Peninsula.

Sometimes the signatures are more specifically tied to a single location like Ewald's Bar, Saginaw, MI, and sometimes they are more vague like in the poem "Only the Dead" which cites Highways 1 through 99 as its locale.

Even with this attention to setting, the poems are not necessarily poems of place.  They are interested in what happens or happened in that place-what makes the setting remarkable, the reason the poem exists.  The moments may be monumental-the first time talking to someone on the phone at the outset of a new relationship-or they may be small moments, simply a night at the bar such as in the poem "View from my Window at Ewald's."  The poems are memories captured on paper.  In "The Things We've Lost (Branta Canadensis)," Beaudin, "legs heavy with memory," writes:

And more and more,
life seems to be a series of things lost;

from a well up a long, meandering trail

till finally, we're home, with only a few drops

These few drops, the memories that exist in place of the past, that fill the absence left by loved ones now deceased and occupy the space of the lover now gone, are the stuff these poems are made of.  The lesson being that it is not what was lost that is important, but that which remains.  It may seem like little left in the bucket in comparison to what had once been there, but somehow it is enough.  Enough to sustain us.  For this is not a mournful poetry, but a poetry of life.  A delight in and a celebration of life.

The Moon Cracks Open and other titles by Marc Beaudin are available at www.AuthorsBookshop.com