The Hamilton St. Pub Brings Affordability and the Area’s Premier Party Band Back Into the Mix of Weekly Nightlife Starting March 5th with Fat Tuesday 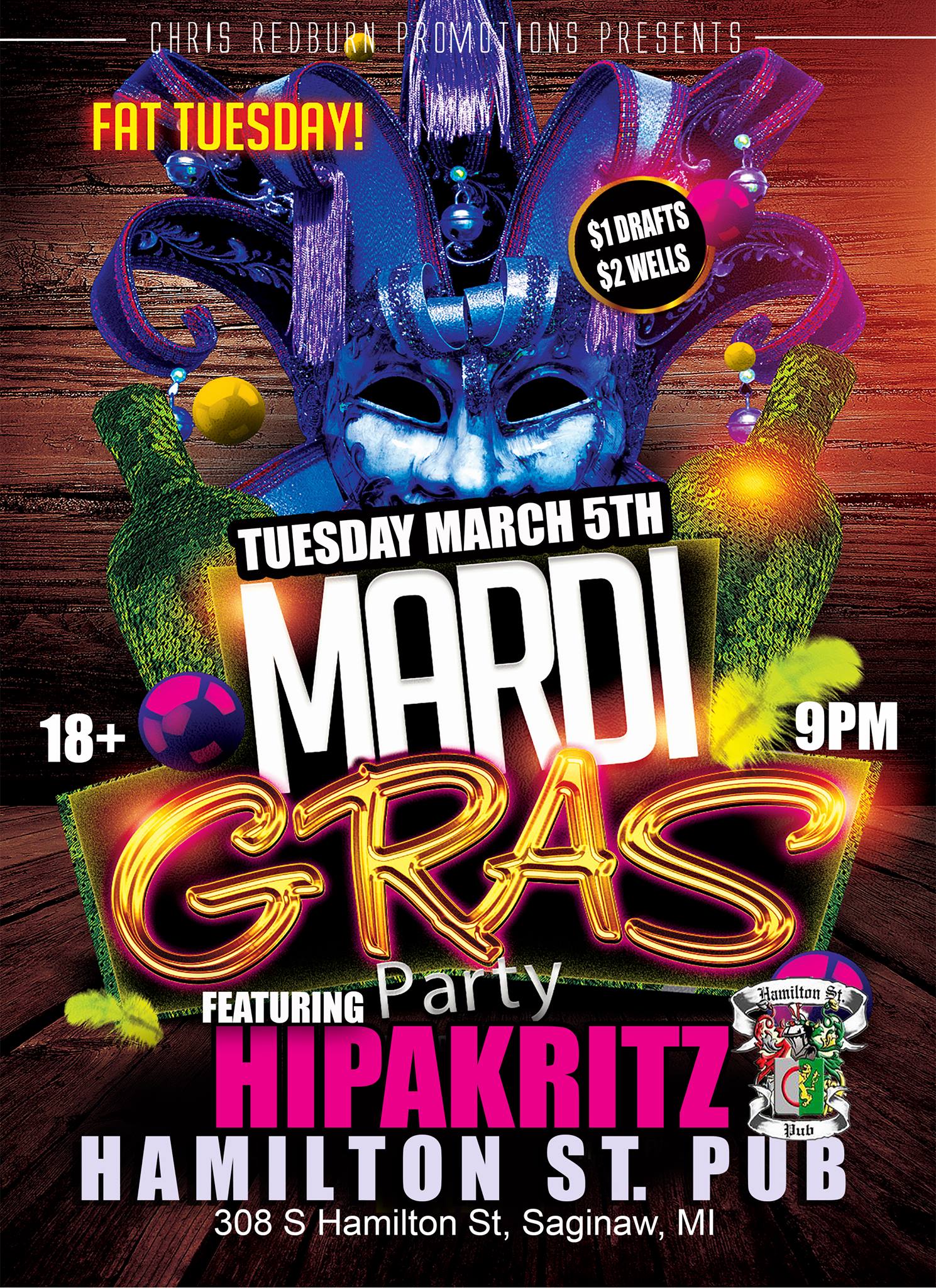 Saginaw’s Hamilton Street Pub is poised to bring fresh life to Old Town Entertainment strip by reviving a time-honored tradition dating back to the 1970’s that was known as ‘Tuesday Draft Night’, which would feature remarkably discounted drink specials and regular live entertainment by the region’s most popular bands.

Starting this week for Fat Tuesday on March 5th and for each subsequent Tuesday you can catch live music by The Hipakritz while enjoying $1.00 Drafts, $2.00 Well Drinks, and $1.00 Tacos, opening a whole new chapter for those eager to enjoy an affordable night out on the town.

And it makes perfect sense to have one of the region’s premier party bands hosting this weekly pilgrimage. The Hipakritz were voted Best Rock Band at The Review’ 30th Annual Music Awards and have a long history of packing dance floors at both clubs and major summer festivals throughout the region and beyond.

Rock and roll has a history of power pairings, where the lead singer and the lead guitarist become almost an entity unto themselves – Mick Jagger and Keith Richards of the Stones or Steven Tyler and Joe Perry of Aerosmith might immediately come to mind to many music fans.  In this region, we have our own version of the Glimmer Twins in Jeff Zimmerman and Michael Eudis of The Hipakritz.

As much as the band is identified with the two, it is also easy to think of The Hipakritz as a family tree, seeing many of the area’s notable musicians moving through their ranks over the years, with alumni going on to join groups like Jedi Mind Trip, Burnaround and Tweed & Dixie, among others.

The band came into existence when Zimmerman, then fronting a unit known as Hipakrit Fish, joined forces with Eudis, recently of the popular band Shovel, approximately 18 years ago.  You can hear the pair’s hard rock sensibilities in their set list, largely built around 1990’s and 2000’s alternative rock and punk pop.  Mix in a catalog of “bar band classics” on call if the crowd requests, partial male nudity (more on this later), a whole lot of energy, and you have an idea of a Hipakritz show.

When asked about their ability to keep the Hipakritz franchise rolling along this long, Mike quickly responds:  “You have to remember that you are there to entertain the crowd.” This is a notion Jeff quickly confirms, adding:  “You are playing for the crowd, not for yourself.  I’ve been in a band where all we did was the songs we really liked and no one came to watch.   We try to play the songs that are going to get people off, rather than only the songs we love that no one else really wants to hear.”

One gets a sense of the camaraderie between the two when Eudis notes, “Sometimes, even after 15 years, we’ll be playing and everyone is having a good time and I look at Jeff, he looks and me and we realize that we just love it.  That’s why I am still doing it.  I guess I got happy.”

One difference you will notice when you go to a Hipakritz gig is they certainly play the room – almost like it’s a member of the band sometimes.  The seminal Hipakritz image is any one of Zimmerman, shirtless, showing off a pretty impressive collection of tattoos, standing on a table or a speaker stack, belting out an anthem like Drowning Pool’s “Let The Bodies Hit The Floor.”

“We don’t have fans.  Rocks stars have fans.  We play in a cover band.  What we have are friends,” he concludes.  “It’s all just fun.  I love being in a band and I will continue doing it as long as things are fun.”

From all observations, that point doesn’t seem to be coming any point soon.  The Hipakritz.  They are where they party is. And now Tuesdays at The Hamilton St. Pub is where you can catch them regularly, as the time honored tradition of Tuesday Draft Night continues for a new generation.

The Hamilton Street Pub is located at 308 S. Hamilton St. in Saginaw.

Brett Eldredge: Songs About You Tour